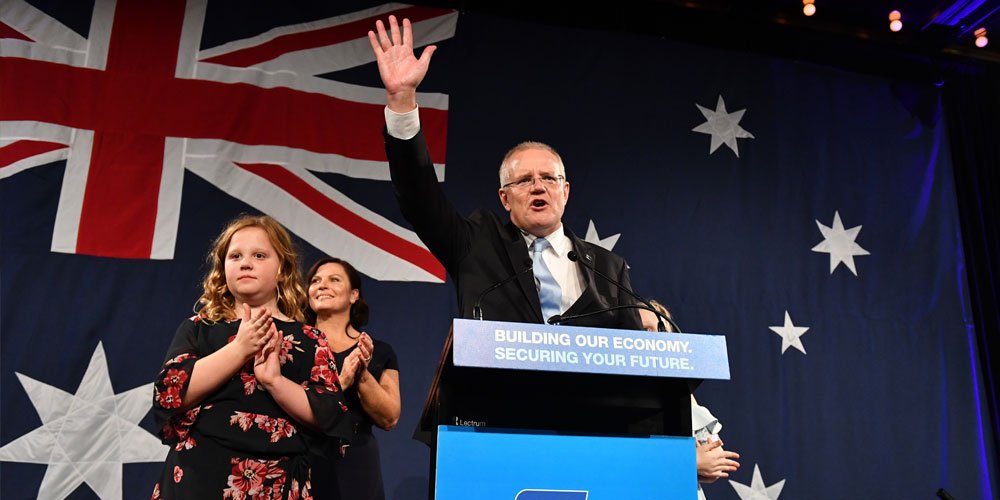 Standing in front of a massive Australian flag in a hotel ballroom, Scott Morrison declared his surprise election victory a miracle.

The next day, newspaper headlines anointed him the “messiah from the Shire”. The man of faith had always believed victory was possible, even when those around him wavered.

The May 18, 2019 election win handed  Morrison an opportunity to stamp his authority on the government that no prime minister had had for a decade.

Now, the twin crises wrought by the coronavirus have handed him an even bigger opportunity to reshape the nation’s economy. One criticism levelled at Mr Morrison over the past year has been his lack of agenda. The income tax cuts that were his top priority were passed in parliament’s first few days. They were the centrepiece of the 2019/20 budget – along with the now jettisoned surplus – but built on cuts offered the previous year when Mr Morrison was treasurer and Malcolm Turnbull prime minister. The rest of the priorities he outlined shortly after the election read like the Liberals’ greatest hits for decades –  industrial relations, growing jobs, deregulation, increasing competition.

He chalked up a win at the G20 on moves towards action against social media enabling violent extremism, amplifying New Zealand’s voice after the horrific shootings in Christchurch perpetrated by an Australian right-wing terrorist.

While in Osaka for that meeting, he dined with Donald Trump. The president who loves a come-from-behind winner heartily congratulated Mr Morrison on his election victory. Later in the year, at the G7 summit in France where the Prime Minister was invited as a special participant, Mr Trump jokingly announced him to other leaders as “the King of Australia”.

The mateship strengthened with a state visit to the White House in September. Mr Morrison returned from America with more than a model ship and a Tiffany bowl in his luggage. Opponents highlight his slipperiness with the truth and smirking evasiveness when faced with questions he doesn’t want to answer. This came to a head with his handling of the bushfire crisis over summer.

There was the hidden Hawaiian holiday, the slick Liberal Party video lauding the rollout of Defence personnel and the infamous visit to destroyed New South Wales towns where he was heckled by locals. He appeared determined to learn from his mistakes when the coronavirus crisis hit, gathering expert advice, acting decisively and collaborating with premiers.

A leader’s popularity always skyrockets in a crisis, but Mr Morrison’s resurrection stands out on a global scale. If he sustains this while navigating the diabolical exit from the health and economic crises Australia now faces, that might prove the real miracle of his prime ministership.

Continue Reading
You may also like...
Related Topics: Prime Minister