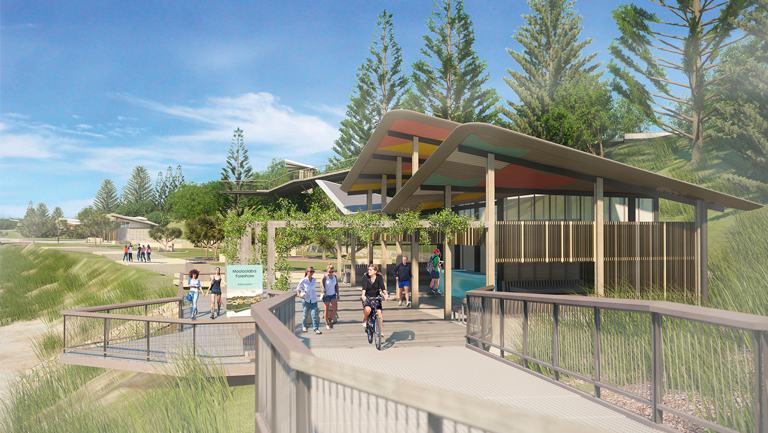 The Mooloolaba foreshore will look drastically different in just a few years, with the first phase of the Place Making Mooloolaba Master Plan to get underway soon.

The plan, which was initially endorsed by the Sunshine Coast Council in 2015 saw the June 30 closure of the former Mooloolaba Caravan Park, which had been a fixture on the beachfront for 100 years.

A council spokesperson says the former northern Mooloolaba caravan park site will be used as a temporary car park for 124 vehicles to provide alternative parking options while the Brisbane Road car park development is underway (to be completed in September).

“While the site is being used as a temporary car park, our community will enjoy access to the beach via a connecting pedestrian walkway which was not possible when the site was a caravan park,” the spokesperson says.

“Construction will start on the foreshore redevelopment when the new multi-storey Brisbane Road car park opens,” the spokesperson says.

The new-look foreshore will include more than 6200 square metres of additional parkland with a kiosk, an outdoor gym, a new amenities building, public art, a modern adventure playground and furniture, as well as a refurbished Loo with a View structure.

The most talked about component of the plan is the move to see the former caravan park site returned to the community.

The closure of the caravan park was a huge disappointment for the Mooloolaba Caravan Park Action Group. Spokesperson Jon Erbacher says the council’s statistics show 72 per cent of the people who provided feedback over two phases of community consultation for the master plan supported the relocation of the caravan park, not its closure.

In addition, 3065 people signed a Queensland Parliament e-petition against the closure of the caravan park.

Erbacher says he cannot believe the council “chose to ignore” the petition as well as the recommendation from Natural Resources Minister Anthony Lynham that the council give serious consideration to amending the master plan to include a caravan park in the final development of the Mooloolaba foreshore.

“Caravan parks are very popular with both tourists and locals and they support local shops and business owners,” he says.

While the council has made it clear the land will be tied up as a car park for the next two years, Erbacher says the action group has not admitted defeat yet and will begin lobbying again in two years to have the caravan park to be reinstated or relocated.

Meanwhile, Mooloolaba Business and Tourism President Bruce Ferguson says the master plan will be a marathon rather than a sprint, but the “disruption will outweigh the future benefits.”

“This project is going to culminate in a fabulous, modern area that is going to attract residents and locals for a long time to come,” he says.

Ferguson agrees with the council’s decision not to renew the northern caravan park lease in order to open the space up to the public.

The Place Making Mooloolaba Master Plan is available to view on sunshinecoast.qld.gov.au.