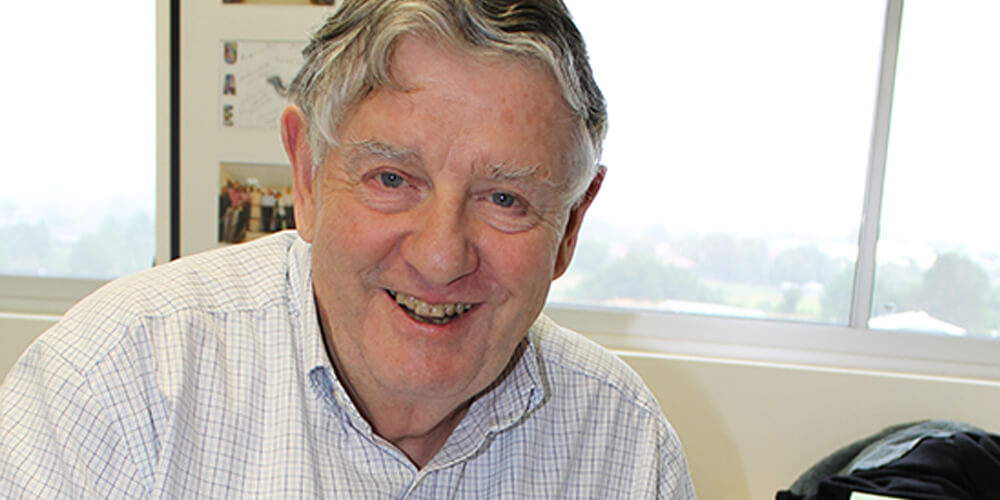 A ground-breaking plan by a University of the Sunshine Coast professor could transform road freight across Australia’s eastern states in the future.

Professor John Yeaman, who this year received a Member of the Order of Australia for service to civil engineering, is researching the plan for a 150kmh road built on high-tech plastic pipes between Weipa and Melbourne.

The 79-year-old started his early working life in the quarrying industry, where he used or sold non-renewable resources daily.

“We are all using so much non-renewable resources in building roads and other infrastructure, so I wanted to look for something else, something that is sustainable, and it came from the fact that we haven’t changes the way we build roads since Julius Caesar,” he says.

“Pipes or tubes are the strongest form of structure and you can also run electricity through them or pump water through them.

“The road system we are researching would open up Queensland. If we can run a road that carries water right through the outback of Australia, we can grow anything.”

If It Ain’t Broke, Don’t Fix It is the title of Yeaman’s research paper, but he says the system is broken.

“We are depleting non-recoverable resources and while we do use lots of recycled materials again in roads, a lot also goes to landfill,” he says.

Yeaman says his proposed road network would see convoys of self-driving trucks carrying freight direct from Weipa to Melbourne in 24 hours, saving five days’ transport time and taking tonnes of freight from other roads, rail and the sea.

“They would join a peloton of 10 to 12 vehicles on the road and transfer control to the lead vehicle, which would then control the whole peloton.

“If they need to leave the road at any stage to make a delivery, the driver can then switch to manual and pull out.

“The vehicles in front and behind would then close out. If another vehicle wishes to join, they simply add onto the end. It’s pretty magic like that,” he says.

Yeaman has been USC’s Professor of Civil Engineering Construction since 2011 and has spent three years working with research students connected to the Master of Engineering (Transport Technologies).

“They’re some very bright young people who come to this university and they’ve got good ideas. That’s what keeps me young,” he says.

“I want the next generation of civil engineers to adopt innovative approaches; using the latest technologies to find solutions to problems.

“For example, the road proposal I’ve been working on for three years could remove the need for rail lines to ports on the Great Barrier Reef.

“Instead, coal mines in the Galilee Basin could pump slurry to Weipa, to be carried on the new polyethylene pipe road heading south.”

When he presented his vision to a regional engineering forum on the Sunshine Coast earlier this year and at a conference in Milan last month, Yeaman says he received mixed responses.

“Half the audience wants to stone me as a heretic, and the other half think it’s a good idea, but it will never work.

“There is usually one person who is inspired and thinks it’s a great idea. That’s what keeps me going,” he says.

“This research is important because I feel that in 2030, almost everything will be an autonomous vehicle, so we should be doing the research now at a small cost, instead of rushing to do it when it is vital and have to throw huge amounts of money at it.”

Yeaman hopes the government will see benefits of getting ahead, and hopes to secure $30 million over five years to have up to 30 PhD students “working on the problem.”

“If we can do that, we will have the problem solved in five years and even if we then put it on the shelf, when the time comes, we will be ready to start building the system,” he says.