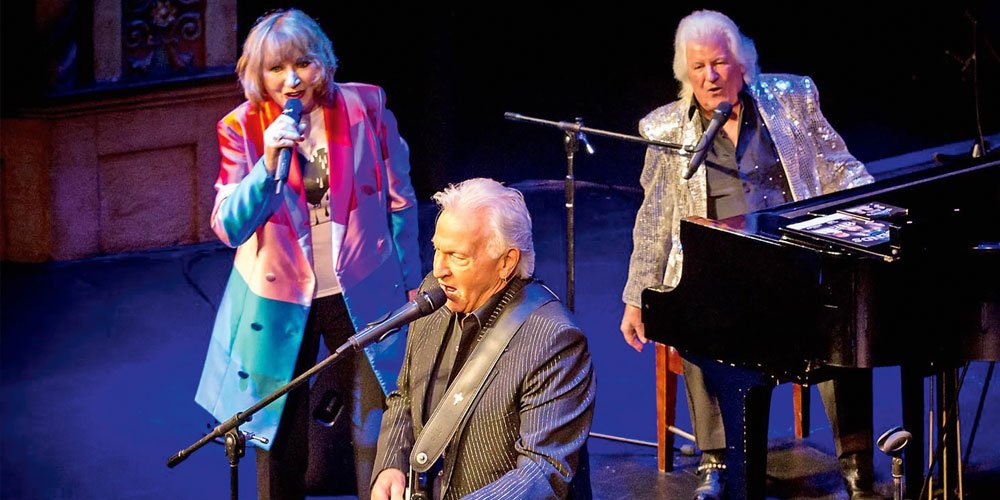 It kicks off with Shakin’ all Over and the Boomers take it from there.

Normie Rowe, Dinah Lee and Jade Hurley are working their magic on audiences nostalgic for their heydays and they are loving it as much as their fans, who are turning out in droves to shake, rattle and roll.

All three performers are Australian musical royalty. They hark back to the days of Bandstand; The Johnny O’Keefe shows and that fabulous dance – The Stomp. They were there on the stage when young girls and long-haired boys put on their mini-skirts and bellbottoms and for the first time in history went out to rock ‘n’ roll.  The ’50s were done and, in Australia, these were the people who set the 1960s on fire.

Australia’s King of Country Rock piano player 77-year-old Jade Hurley exudes the same lightning energy he ever did and he’s upbeat and animated when he talks about the day that changed his life.

“I was 14 years old and drinking schooners of beer at a pub, I was drunk as a skunk, of course we were underage, and there was a talent quest at the pub and my mates – all the bodgees and widgees, entered my name up there for a joke.

“When they called out John [real name], I got up there and did Jerry Lee Lewis’ Whole Lot of Shakin’ Going On. I was rocking on, kicking the keys, and jumping all over the piano and I won the competition.

“Johnny O’Keefe had just finished a concert at Wollongong and happened to drop into the pub on his ways home and he asked me onto his show.”

The rest is history; from The Johnny O’Keefe Show Sing, Sing, Sing and Bandstand to the marvellous Mike Walsh Show, Jade Hurley is still entertaining and shakin’ all over in anticipation of the March 13 show at the Caloundra Events Centre stage.

New Zealand singer Dinah Lee, is just a couple of months younger than Mr Hurley and like him, she had a pedigree music history. After leaving New Zealand and making it in Australia, she went on to find success in America, performing in  the television show Shindig. Today, people with a certain style are called hipsters – back in the day – the cool people were called ‘mods’ and with her perfectly coiffed pagegirl haircut, blinking long-lashed eyes and dresses of a certain length – Ms Lee was the quintessential mod. Ms Lee loves being part of the show, she has known Mr Rowe and Mr Hurley for the bigger part of her life and is having a ball doing the songs she is known and loved for including her number one hits Don’t You Know Yockomo, Reet Petite and Do the Blue Beat.

Normie Rowe, at 74 years old, is the little brother and these days, he doesn’t mind being called that. In a creative capacity, he’s used the stage for all sorts of performances from rock ‘n’ roll theatre. and still sees his 600 performances as Valjean in Les Miserables, as the highlight of his career.

Yet, before that, he  claimed the title of Australia’s first King of Pop with hits including Shakin’ All Over, Ohh La and It Ain’t Necessarily So. These were the songs that sent young girls into a frenzy and were his first steps to national fame.

Later on, his talent saw him tour with the likes of Gene Pitney and Roy Orbison. In 2021, he’s in fine health (going to the gym three times a week) and is enjoying using his skills in the show. He’s upbeat and absolutely ready to rock ‘n’ roll. At the same time, he’s only too happy to acknowledge the good luck in his life.

“If you are born in Australia, you have won the lottery,” he says.

And as long as health permits, he says he will keep performing.

So, put on your dancin’ shoes and get ready to bop, rock ‘n’ roll and perhaps even stomp with the musicians who made Australian history.

The Three Legends in Concert show is on Saturday March 13 at The Events Centre, Caloundra, 8pm. For bookings visit theeventscentre.com.au or call 5491 4240.

Son joins his mum as she tackles another triathlon
How good is your latte art?