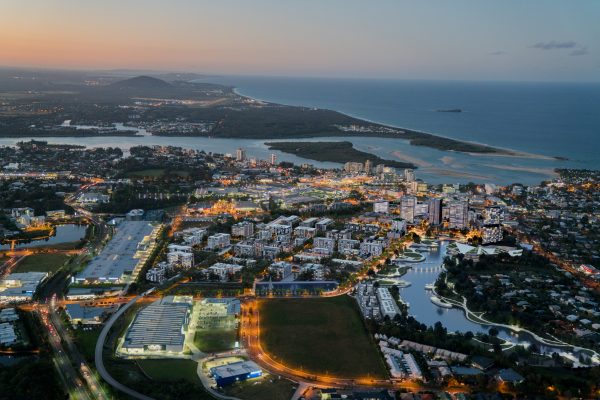 A Memorandum of Understanding has been signed by the Sunshine Coast Council, global infrastructure and property development company John Holland, the University of the Sunshine Coast, and SunCentral Maroochydore signalling the continuation of exclusive negotiations to develop multiple lots in the new Maroochydore city centre.

John Holland, which delivered the $150 million Sunshine Coast University Private Hospital in Kawana, is poised to take a stake in the new city centre in a deal with an end value of more than $200 million.

USC vice-chancellor Greg Hill says the university is considering a combination of student accommodation, teaching and community spaces in the new city centre, while the council has already committed to having its primary civic presence in the core commercial precinct, with customer service facilities, a council chamber and work space accommodation for staff and councillors.

Mayor Mark Jamieson says the council will maintain a strong presence in Nambour and Caloundra into the future.

Jamieson says John Holland’s interest in the CBD project is a “huge vote of confidence in the future of the Sunshine Coast.”

“We are creating Australia’s first truly smart city for the 21st Century – one which will generate thousands of construction jobs, more than 15,000 permanent jobs and provide a $4.4 billion boost for the local economy,” he says.

“John Holland obviously understands the value in being part of the early stages of this development and the growth trajectory of our region, with the development of a new CBD, the opening of the new Sunshine Coast University Hospital, the expansion of the Sunshine Coast Airport and our plans for an international broadband submarine cable linking the region directly to global markets.”