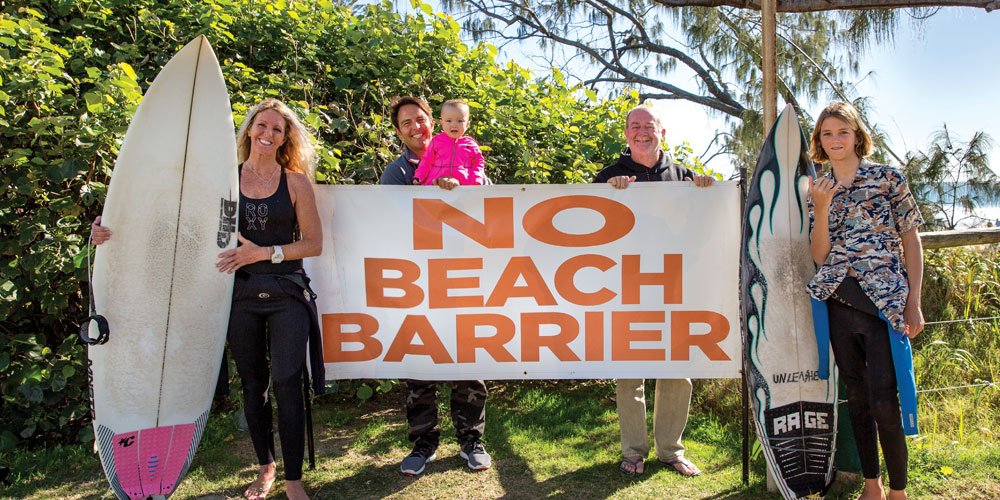 On May 8 this year, a group of passionate beachgoers formed a protest group to challenge the design of Stage 6 of the M2M Mooloolaba to Maroochydore cycleway. The Beach Matters group opposes the six-kilometre cycleway, which they say will build unnecessary barriers to beach access both through the location of the cycleway and the demise of beachside car parks. They are also concerned about encroachment on green areas in the Okinja Road area.

The Maroochydore (M2M) cycleway is designed to run from the Sunshine Motorway near the Mooloolah River, through Mooloolaba to the new Maroochydore City Centre at Maud Street in Maroochydore. The Queensland government has allocated $6.7 million for delivery of a 1.2-kilometre section of the project on Alexandra Parade from Mary Street at Alexandra Headland to Sixth Avenue at Maroochydore (Stage 6).

In response to community demands, including Member for Maroochydore Fiona Simpson asking the state government to “pause and re-think”, the Department of Transport and Mains Roads (TMR) – who has partnered with the Sunshine Coast Council – has extended consultation/feedback time to July 31.

Beach Matters is a community-oriented group made up of residents, businesses, lifesavers, surfers, walkers, runners, cyclists, seniors and family groups looking to protect the safety and access beachgoers currently enjoy along the Alexandra Headland strip.

Well-known Buderim author, business woman and keen surfer Rachael Bermingham says for the past couple of months, the group has reached out to the community to highlight the proposal and encourage feedback on the plan. The group has organised a beach rally, created a Facebook page, spoken to councillor Joe Natoli and worked with Ms Simpson.

Ms Bermingham says more than 2500 people have signed the ePetition and the physical petition.

They have received hundreds of feedback forms and it is estimated that around 1200 people attended this month’s beach rally against the plan.

The group says the cycleway location and loss of beachside car parks will change the nature of this iconic surf beach. No longer will boardriders, families and general beachgoers have the benefit of beachside parking for easy access. Instead, the design complicates existing access  through the placement of barriers and the travel involved to get to the beach from relocated carparks.

The group believes there has been a lack of community consultation and there is a general misunderstanding of cycleway usage. They want the public to know that the cycleway will accommodate all active transport users such as scooter riders, skateboarders and those in wheelchairs.  The design shows that M2M will encroach upon the Okinja Road beach access point, currently the most fragile stretch of beachfront in Queensland.

They would prefer a widening of the existing path running along the foreshore, which would lend itself to having the green cycle line run through it, thus creating a clearly defined, but shared space. They’re also calling for a reduction of the existing speed limit, redesign of the Okinja Road access area to give more space back to the dune region, and redesign of the cycleway so it goes through Nelson Park and doesn’t affect the majority of user groups.

According to the council, the M2M cycleway conforms to the core element of the council’s Integrated Transport Strategy. The cycleway is seen to be a sustainable shift to reduced car dependence and increased physical activity.

A council spokesperson says a change in transport habits can only come about if change is implemented through investment in alternatives to motor vehicles, while still recognising the significant role that mode plays.

The council says the cycleway, by providing dedicated infrastructure, separated from cars, will encourage people to get out and use active transport options for their daily commute or recreation trip, helping to achieve the vision for the Sunshine Coast to be Australia’s most sustainable region.

The council encourages community members to have their say on the proposed design and provide feedback by visiting tmr.qld.gov.au/m2mcycleway or email m2mcycleway@tmr.qld.gov.au by July 31.

TMS says the design provides a separated cycleway connecting Mooloolaba to Maroochydore. Additionally, the dedicated cycle facility (with a separated pathway) has been designed to reduce the need for interaction between motorists and people riding bikes on roads. Together with this, it will also reduce interaction between active transport users and pedestrians on the existing footpaths, improving safety, comfort and travel time for all users.

Car parking is it coming or going?

This parking impact of 91 spaces can be mitigated by providing around 111 new car park spaces in the corridor, resulting in a possible net gain of 20 car parking spaces as well as eight additional motorcycle parking bays. Short-term pick-up and drop-off bays are also being considered by the Sunshine Coast Council to increase the efficiency of the car parking in the area.

The consultation period for Stage 6 of the Mooloolaba to Maroochydore cycleway started on Monday, May 11 and will close on Friday, July 31.

That’s the message from the Beach Matters group.  The group is spot on. This cycleway design shapes the future of the unique iconic strip. There are no second chances.

For the public to have an informed say, they need certain information. Firstly, the current artist’s impression (pictured) and others on the TMR website, need stronger detail to provide us with a clear vision and details spelled out in, highlighting the areas where changes will have the most impact. Secondly, an extended consultation period is needed to enhance public awareness.

The creation of cycleways is an important dimension of modern society. They are meant to provide health-giving benefits, not take away green space and complicate beach access.

Perhaps an alternative cycleway location can do that, and understandably this will need more public consultation.