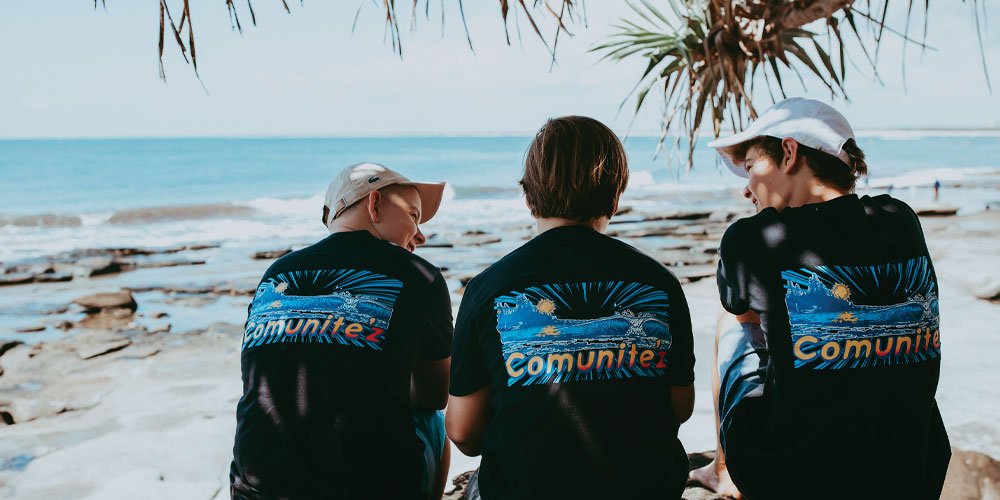 With the festive season upon us, mental health support organisations across the region are preparing to help those who struggle emotionally at this time of year.

A small team of passionate and dedicated people in Caloundra are stepping up to make a difference in changing the perspectives of young people with depression and anxiety through the Comunite’z movement.

Mr Taylor is now a SafeTalk and ASIST program ambassador and is a member of the Alliance for Suicide Prevention – Sunshine Coast.

It has been 16 years since Mr Taylor attempted to take his life.

The then 26-year-old was tired from carrying the heavy weight of depression and anxiety that had plagued him for many years as a young man.

Now aged 42, Mr Taylor says he has experienced the best years of life since that day in 2004, including meeting his wife and becoming a father to three beautiful children.

Going on a personal development journey has allowed Mr Taylor to see the world through a whole new lens and his quest is not only to prevent others from the depths of the struggle he has endured, but also to honour two very special people in his life who have committed suicide in the past seven years.

“I’ve had lived experience on both sides of the fence and in this day and age there is hardly anybody who hasn’t been touched by suicide in some form,” Mr Taylor says.

“For me, my father took off when I was young and my mother was career-focused and she taught me a lot about working hard, but I bounced between being cared for by my mother and my grandparents, who were incredible people, but the situation meant I had ingrained into my subconscious that I was not worthy of stability and love. I wanted to have that traditional family that I never had,” he says.

“I had got married in 2003, but it was over as quickly as it started and it triggered severe anxiety and depression, taking me to some dark places. I would claw myself out of the pit and then find myself falling in again. After a while, it just felt like too much energy to climb out again.”

Mr Taylor was saved by his stepfather and says he is grateful every day that he was given a second chance at life.

“Everyone walks a different journey, but something shifted inside of me and I rediscovered my passion for motorcycles and it was working in this industry where I met my beautiful wife Kattisha,” he says.

“My road to happiness was found when I embraced my authentic self and did the things that I loved.

“Comunite’z is all about creating programs for young people to connect them to different opportunities to build community and connection, both massive things we all need in our lives.

“If we can help young people uncover their passion, whether it is surfing, music, art, jiu-jitsu, dance… we can connect them to the community that will build their passion.”

Mr Taylor says they are working towards making Comunite’z a not-for-profit organisation and are starting out selling kids, ladies and men’s T-shirts with the eye-catching logo emblazoned across the back to raise the money needed to develop their youth program.

“We’ve taken the 14th century French spelling for community and added the Z on the end for Zak, which was very important to me, it also has the word ‘unite’ in it,” he says.

“We hope these T-shirts will become conversation-starters to encourage conversations around mental health so it is no longer a taboo subject.”

You can purchase Comunite’z T-shirts through the Zak’s Community Facebook page. To find out more, email info@comunitez.com.au.If you or someone you know is in need of support, contact LifeLine on 13 11 14 or Beyond Blue on 1300 224 636.

A free digital tool that connects residents to mental health and suicide prevention services has been launched by the University of the Sunshine Coast’s Mind and Neuroscience – Thompson Institute.

iHelp Sunshine Coast brings together the extensive range of help that is available including crisis support, mental health professionals and peer support groups.

Thompson Institute director Jim Lagopoulos says iHelp was created because when a person needs help for their mental health, it is vital that it be easy to find.

“Anyone on the Sunshine Coast experiencing a mental health issue, or even a crisis, has local services all in one place at their fingertips on iHelp,” he says.

“Whether a person notices early that their mental health needs attention or whether they are nearing or at a crisis point, it is very important that they can find help quickly and easily, and iHelp exists to help anyone do that,” Mr Lagopoulos says.

iHelp is available as an app on iOS and Android mobile devices or online at thealliance.org.au/ihelp

Worth the wait
Let’s help our farmers face Christmas