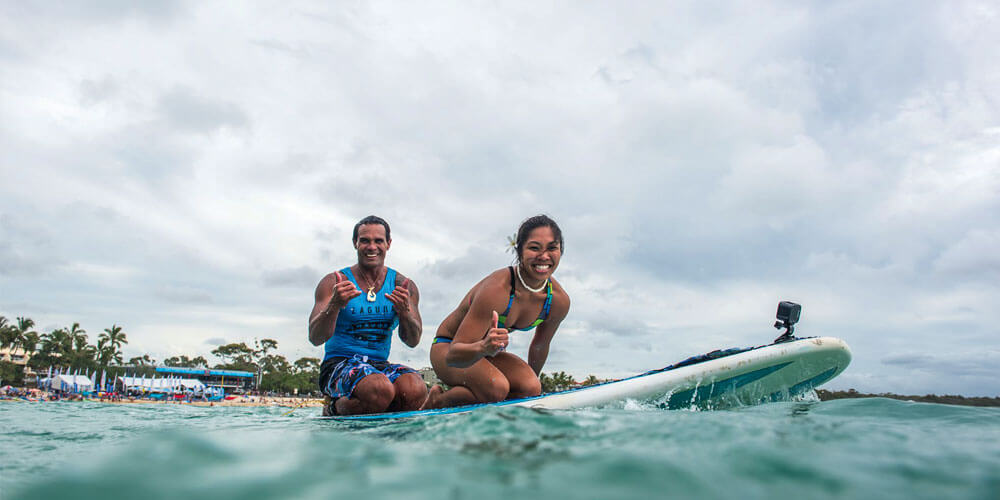 Did you know every single piece of plastic ever manufactured is still present? Whether it’s still in its original form, has been recycled and reused or has broken down into micro-plastics that are polluting the land and waterways, it is still in our world.

As such there is an urgent need for action, and two legendary Aussie surfers are among those throwing their support behind a strong sustainability message at this year’s Noosa Festival of Surfing.

Organisers of the biggest festival of its kind in the world are taking advantage of the ability to connect with ocean lovers of all ages by hosting the second annual Sustainability Day on March 16 as part of the stellar festival line-up from March 10 to 17.

Mr Visser, a renowned ocean adventurer, says connecting with fellow surfers to spread the message about waste minimisation and environmental responsibility is a cause close to his heart. The 34-year-old, who lives in Buddina when he’s not travelling the world, became the Unitywater Back to Tap campaign ambassador a couple of years ago and is looking forward to speaking with some of the 600 competitors, who come from 17 nations, to spread awareness.

“It’s awesome to be part of a campaign that encourages people to go back to reusable water bottles and refill them for free from the tap. I’ll stand behind that every day of the week and I am proud to represent that message,” Mr Visser says.

Having surfed monster breaks and seen beaches at their best and worst around the globe, Mr Visser says Coast beaches are among the cleanest in the world and he is keen to see the anti-plastic mentality continue to grow.

“I do a lot of diving and spend a lot of time with marine animals and when I see things like bottles out in the water, it pulls on your heartstrings. At the same time, it is also awesome to see more and more surfers and those out on the water picking up rubbish when they see it and placing on their craft to dispose of properly. Every little bit will help.”

The Unitywater Sustainability Day begins with an Awareness Market, with organisations including Noosa Community Biosphere Association, Noosa World Surfing Reserve, Sea Shepherd, Surfrider Foundation, Noosa Council and Ocean Crusaders presenting activities and offering information about how to make a change for the better.

After-school activities include a plastic waste art workshop, and the Paddle Against Plastic, on Noosa River, where participants collect and analyse waste.

Surfboard guru Nev Hyman will lead a discussion on plastic waste with panellists including Mr Visser, Noosa councillor Joe Jurisevic and Ms Beachley, who is the chairperson of Surfing Australia.

Also an ambassador for Planet Ark, a strong supporter of the Surfrider Foundation and the Take 3 for the Sea initiative, Ms Beachley says she will talk about how we can support our environment while still enjoying it. Visiting the festival for her 10th year, Ms Beachley says while the “beaches tend to sparkle” at Noosa, “every one of us plays a part in preserving the environment, and we need to keep on plugging at the knowledge consciousness and give refreshers and reminders to educate us all of us on the impact that we are having”.

Noosa Festival of Surfing media manager Thomas Alexander says the festival’s move to be single-use plastic water bottle-free is one of the major steps towards creating a more sustainable event.

“As surfers, we have a stronger connection with the ocean than most,” he says. “The ocean is suffering greatly all around the world and we surfers are immersed in the very forefront of this issue. We must lead the fight for a far more sustainable future.”

For a full schedule of festival events, visit noosafestivalofsurfing.com.

Together we stand
A sweet idea