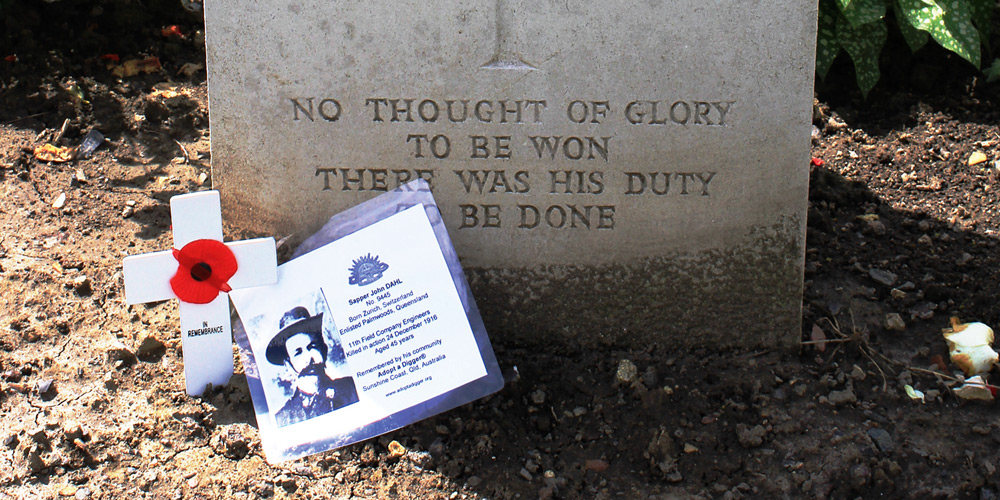 While some young men increased their age on paper in order to enlist for World War I, a Buderim resident shaved a few years off of his.

John Dahl was 44 years old when he signed up for the Australian army late in 1915. The widower and father-of-one, who was killed in action shortly after arriving in France a year later, has been chosen as the Buderim War Memorial Community Association’s ANZAC and Remembrance Day Committee’s local hero.

Committee member Geoffrey Hole says Sapper John Dahl is vastly different to the decorated war hero Eric Foote, who was celebrated as Buderim Hero last year. These differences not only in age, but background, demonstrate the wide cross section of young men who enlisted in World War I.

Mr Dahl will be remembered along with the more than 60,000 of his comrades who died in the war.

“We know how John Dahl felt about the shortcomings of younger people not entering the services, because he was interviewed by the local correspondent of the Brisbane Times, a friend of his, before he left for the Western Front in France,” Mr Hole says.

The Times quotes Mr Dahl as saying youngsters were “…too scared and not patriotic enough” to join the fight.

“Because he had that interview  done before he went away, it gave a contemporary feel for what was going through the minds of people before they went off to war,” Mr Hole says.

“By 1916, Australians had seen some pretty awful things on the western front, particularly in Gallipoli, and the number of recruitments was falling off. John felt that he needed to set an example for the young fellows that weren’t stepping up and getting involved anymore.”

A Queensland Rail labourer until 1901, Mr Dahl had moved to the Sunshine Coast to start a small fruit orchard at Mons in his thirties and left from Adelaide on HMAT A29 Suevic on May 31, 1916 as part of the 11th Field Regiment of Engineers.

He was based in the support line at Armentieres and was tasked with the job of bridge repairs and securing trenches for artillery. Mr Dahl was killed in action on Christmas Eve, 1916, leaving his son John Addison Dahl in the full-time care of Mr Dahl’s sister.

Mr Hole says they have been trying to track down Mr Dahl’s son and any other relatives to invite them to the Buderim service, which will be led by retired Army officer Drew Milled with accompanying music from the Buderim Mountain State School Choir and String Ensemble.

The Buderim Remembrance Day commemoration will be held on November 11 at 10.30am at the E J Foote War Memorial Sanctuary, Park Lane, Buderim.

Remembrance Day ceremonies being held across the Coast

Caloundra Gather at 10.15am at the Caloundra RSL, 19 West Terrace. The service will be held behind the RSL in the Memorial Garden. All welcome. Wreath enquiries to Caloundra RSL Sub-Branch Secretary Heather Christie on 5438 5800.

Kawana Waters Gather at 10.45am at the Kawana Waters War Memorial, Pacific Boulevard, Buddina. Wreath enquiries to Rob Hunt on 5493 5290.

Maroochydore The Maroochy RSL Sub-Branch will be conducting a Remembrance Day Ceremony at the Cotton Tree Cenotaph at 10.30am. Please direct wreath enquiries to Ian Hicks on 5443 1719.

Neil Diamond adds Sunshine Coast to tour
Have you got a winning idea for Hackfest?