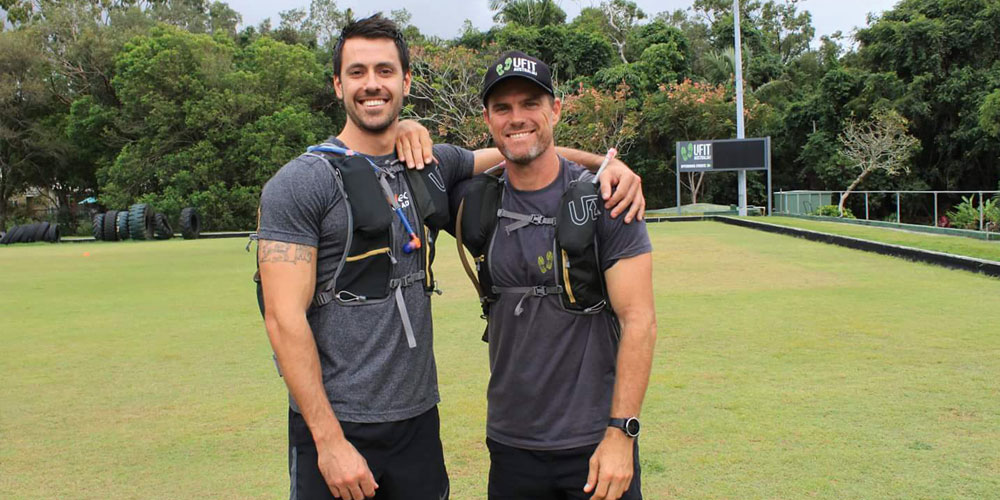 What started as a hypothetical conversation between the pair has led to them planning a trip to Papua New Guinea on June 10 to run the gruelling 96-kilometre Kokoda Trail in 30 hours.

It is not only a personal physical challenge, but will also act as Mr Greedy’s annual fundraiser, with all of the money they raise going to Wishlist to buy a Lucas CPR machine for use at the Sunshine Coast University Hospital.

Mr Greedy is a 30-year-old former Hodgkin lymphoma patient who has gone on to undertake a number of physical challenges in the name of charity, climbing mountains in Tanzania, France and Nepal. He has raised more than $60,000 for various organisations in the process.

Mr O’Neal has been a Kokoda Trail guide since 2011 and met Mr Greedy on one of his four-day tours in 2014. It was last year that Mr Greedy asked if Mr O’Neal thought he could run the trail and how long he thought it would take that saw the seeds planted for the adventure, and they decided to “have a crack at it”.

Mr O’Neal, who is ex-military and had a great-uncle who fought at Kokoda, will be taking a tour group along the trail the week before their epic sprint, which will see them run the trail unassisted and carrying eight-kilogram packs containing five litres of water, medical supplies, food, GPS equipment, satellite phones and “phones for selfies”.

“I’ll be running a couple of markers out [during the walk] because even though I am familiar with the track, there are a few junction points where it is hard to know which way to go,” Mr O’Neal says. “When we are doing the track at speed, these are the points where I’ll be second-guessing myself. We will have GPS going and all that jazz, but this will be extra peace of mind.

“I am really looking forward to it. It’s going to be challenging and if we have any rain, the already ridiculous terrain will be wet and slippery, which will slow us down, but in saying that, it will make it a bit cooler for us to run in.

“We will be consistently running and only breaking for very short periods of time, because if you rest for too long, your body starts loading up with lactic acid and our legs will start shutting down. Physically, we are more than enough prepared, but when you get to that 18- to 20-hour mark, your body starts playing games and your head plays even bigger games.”

This year’s cause is close to Mr O’Neal’s heart, having lost his father in August last year from complications following a heart attack.

“I have watched the Lucas machine being used and it allows someone that is in cardiac arrest to continue to receive CPR while emergency crews can take a scan of the patient to find out where any blockages are in their system. Without this machine, they have to stop compressions in order to do this scan, so it is really functional and can help to save lives,” he says.

“Many emergency crews in New South Wales already have these machines, so I can’t wait for people to see the functionality of them when they are in use on the Sunshine Coast, and hopefully we can see a larger roll-out of these machines across the state.”

To donate to the Heart and Soul Kokoda fundraiser, visit giving.wishlist.org.au/heartandsoul.

Trash talk
The drive to save young lives