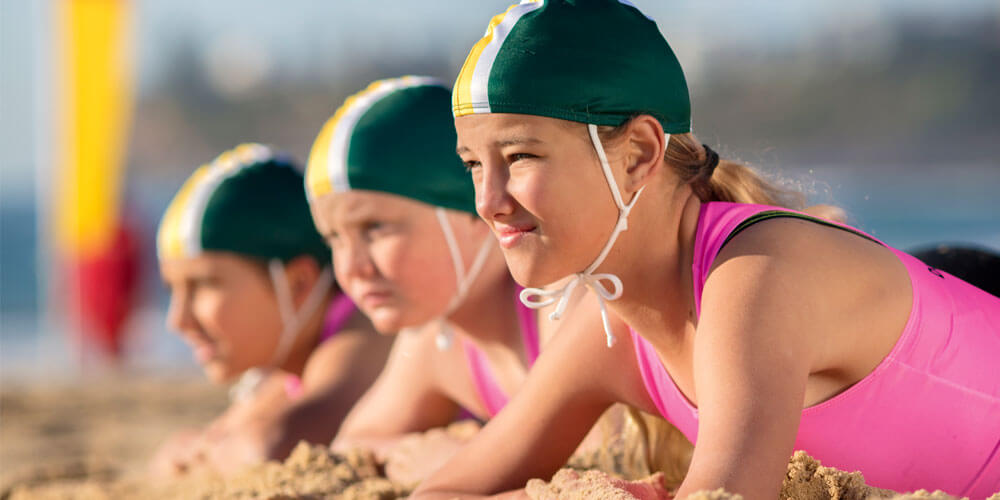 The Sunshine Coast nippers of 1968 counted chariot races and pillow fights among their competitive sports. But as around 4000 nippers prepare to don the iconic pink rashies from September 1 to take on the 50th anniversary season across the region, there is not a pillow in sight.

There will be celebrations aplenty as Surf Life Saving Queensland (SLSQ)marks five decades since the formation of the Queensland Surf Nippers Association (QSNA).

The milestone season celebrations began last weekend, with the SLSQ Awards of Excellence Gala Ball, and will culminate in March next year, when the Queensland Youth Surf Life Saving Championships are held at Burleigh on the Gold Coast, where it all began with the first state titles in 1969.

“While that remains the core focus of the program today, nippers are also taught about marine stinger protection, sun safety, and surf sports coaching in addition to lifesaving skills,” Mr Kerr says.

“Gear and equipment have also changed… water safety has also improved, with inflatable rescue boats and qualified adults in the water at all times for supervision.”

Mr Kerr says the 400 Sunshine Coast active nippers in 1968 were “all about catching up with mates, having some fun, and being sunburnt every Monday back at school”.

“Nippers were taught to challenge the waves and the surf conditions, and chariot races and pillow fights were amongst the first surf sports,” he adds.

“Nippers is still about family, friends and fun, but today, the nippers are taught skills including basic first aid and resuscitation, how to spot a rip, identifying different types of waves, wading and dolphin diving through the water, and learning hand signals to communicate back to shore.

“Competitive events include beach flags and sprints, board races and surf swims.

“Nippers and surf lifesaving has become a way of life for many families based on the Sunshine Coast. Surf clubs are communities in their own right, with all members becoming actively involved to give back to the greater coastal community.”

While children aged from as young as five can sign up for nippers and remain junior lifesavers until the age of 13, Mr Kerr says it is just the beginning of a potentially life-long association with the lifesaving community.

“There’s no other sport where kids can learn to save a life while staying fit, active and healthy, while forming solid friendships that will last a lifetime,” he says.

“Young or old, there’s a role and a niche for everyone at surf clubs. From turning snags on the barbie or manning the uniform shop and canteen, to being a club administrator or coaching an age group, there really is something for everyone.”

There are now more than 10,000 nippers in Queensland, a far cry from the approximate 1100 that signed on for the inaugural QSNA season 50 years ago.

The movement has played a large role in hundreds of thousands of lives in that time, and My Weekly Preview has spoken to some familiar faces about their nipper memories.

Clint Robinson cemented his place in history when he became Australia’s first canoe/kayak Olympic gold medallist after taking out the K1 1000-metre in Barcelona in 1992. The Maroochydore Surf Life Saving Club life member says the seeds for his success were planted when his father signed him up to the club as a nipper at the age of seven.

“I saw the Moscow Olympics when I was eight years old and a Sunshine Coast man named Grant Kenny was competing,” he says. “While Ironman racing to me was always a pretty exciting thing to watch, it never had the allure for me that being an Olympian did.

“Ironman is an Australian-dominated sport, but in the Olympics, over 100 nations of great athletes from around the world converge, and canoeing always was my greatest love. The competitiveness of it is extreme and the surf lifesaving and sprint ski racing was a fantastic backdrop towards the European summer campaign that I got involved in.”

Mr Robinson competed in the Uncle Toby’s Super Series (professional Ironman circuit) from 1989 to 1995, dominating both the board and ski legs of the race. When his gold-medal tally reached 30, Mr Robinson was awarded an OAM for having the finest national championship record of any surf lifesaver. He also secured a gold, silver and bronze medal over five Olympic campaigns from 1992 to 2008.

Not surprisingly, Mr Robinson says he always found the competitive side of nippers “a lot of fun”.

“I was a young footballer as well, rugby league, and we’d go away with a small team to states or regionals, but with lifesaving, the whole club would go out so a great group of friends and family would go away with you,” he says. “Being such a family-built organisation where volunteers basically run the sport is great and the reality is, without the families there, the sport would not have the lifesavers of the future.”

Through Clint Robinson Performance and Excellence, which he founded five years ago, Mr Robinson has worked with athletes of all ages around the country and is in the final stages of preparing a Coast-based nipper training group.

“I want to get back to the grassroots to teach things the right way so the up-and-coming kids will have the right skills to take them on whatever journey the want to go on,” he says.

Although he has five Coolangatta Gold wins under his belt and was the 2015 Nutri-Grain Ironman Series winner, Alastair ‘Ali’ Day admits he was scared of the big swell when he was a nipper at the age of eight.

But the 28-year-old, who spent his early elite athlete years on the Sunshine Coast from 2012 to 2015 before moving to Burleigh Heads, says he wouldn’t be where he is today if his parents hadn’t signed him up for nippers.

“It was the best decision my mum and dad ever made for me,” he says. “It has taught me to be the person I am today. The principles, disciplines and the values I got out of looking after people and caring for people, volunteering, doing patrols, fundraising, the friendships I got out of it, the racing, the confidence it’s given me, it literally has shaped my whole life.”

Mr Day says he was a “late bloomer” in the sport, having to overcome nerves and a fear of racing when he was younger and not having his “lightbulb moment” until he was 15.

“One of the big lessons I had to learn was to start trusting myself and my capabilities and relax in those situations. Then, when I decided I wanted to be a professional Ironman, I knew that I had it in me to do it and that drove me to overcome those sorts of fears. I put it down to having a great support network in my family and coaches over the years as well,” he says.

While pre-season training for the Coolangatta Gold in October and running his gym Actv Strength Co takes up a lot of his time, Mr Day makes time to connect with young nippers to inspire them on their journey.

“It’s so important, when I was their age, people would come to your school or surf club and it was such a big deal and I guess now that I’ve been given the opportunity and the platform to be able to go out and do that, I take it quite seriously,” he says.

“It’s really important for kids to have mentors and heroes and people to look up to and it’s about giving back. It might be a comment or a phone call or just saying hello to a kid that might make their day and might be the lightbulb moment for them as well.”

Dicky Beach Surf Life Saving Club nipper Mia Warner is preparing for her fourth nippers season and is chomping at the bit to rack up enough placings in local carnivals to get into her first state-level competition.

The 10-year-old loves competitive swimming and board races and says she has become much more confident in the water than she was when mum Lorelle Warner signed her up in the under-eights. “I was kind of unsure at first, but once I got into it, it was really fun,” Mia says.

Now in the under-11s, the first year of state-level competition, Mia says she is aiming for a top eight placement to get into the Queensland titles. “It’s great to compete against each other on a normal Sunday, but when we are in a carnival team, Dicky Beach can all work together and focus on our teamwork,” she says.

Mia’s little sister Lexi has now graduated from the ‘Green Caps’, a beginner class for the under-sevens, and she will don the same green, white and yellow Dicky Beach cap as Mia this season.  The Moffat Beach family is all looking forward to spending more time at the beach, with dad Michael preparing to complete his bronze medallion.

Mrs Warner, who works in administration for Surf Life Saving, says it’s something she would consider in the future as well. “It wasn’t really until we joined the club that I saw first-hand the dedication of so many people and the time they put into it and how committed they are to developing these kids… I don’t know another organisation quite like it.”

Nova Peris finds her voice
Mum in fight of her life