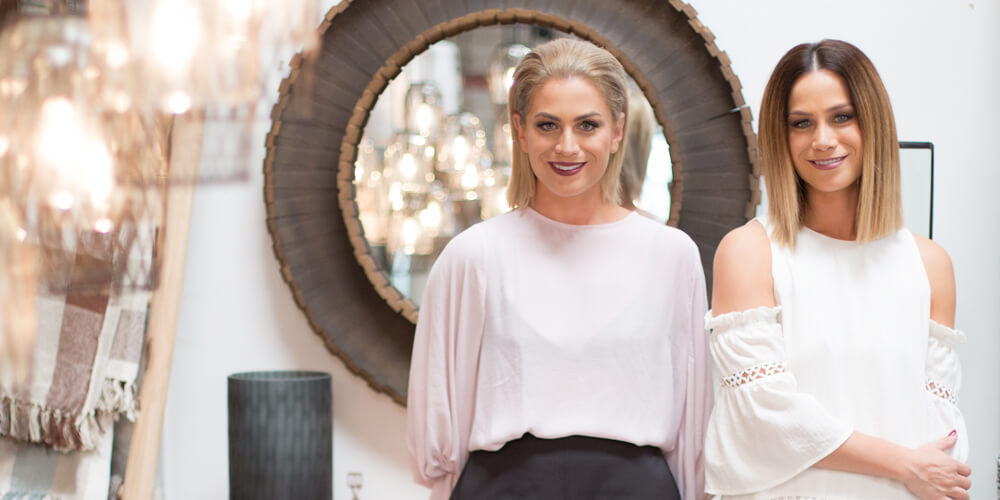 In an industry traditionally dominated by men, Alisa and Lysandra Fraser continue to turn heads.

When these two walk into a room, they own it. Often, in more ways than one.

The stylish identical twins, who traded in life on the police force for a career in property, are among the nation’s most successful interior designers and renovators.

They have collected more than $1 million from their two stints on reality television series The Block, first appearing on the program in 2013.

Today, they have a successful interior design business and, with their latest purchase, they hope to add property developers to their list of accomplishments.

“We have designed a magnificent, bespoke, multi-storey residence that is going to push design and renovation boundaries,’’ Lysandra tells My Weekly Preview.

“We are genuinely very excited by this project and can’t wait to share our journey.

“This project is one that is close to our hearts, already in the planning stages we are giving it our all.

“[There have been] many late nights and lots of coffee.

“The finishes and level of detail, as well as our design execution, will make this a very unique property.

“Think high ceilings, natural light, combined with a spacious and opulent feel that is contemporary yet timeless and sensitive to the historical qualities of the existing build.”

In the short time since they swapped their badges for blueprints, the Adelaide-based duo have witnessed tremendous growth in Australia’s property design industry.

“Over the past 10 years we’ve seen an increase of European influence in design, both in materiality but also functionality, in other words the materials we use and the ways in which we choose to use our spaces,’’ Alisa explains.

“Our homes are our centre of gravity, the spaces where we relax and grow in.

“Home entertainment is big on the agenda and it’s the number one requirement in almost every design brief we work on.

“A move away from large homes means we’ve had to become much cleverer with how we design our spaces, with a big emphasis on functionality and organisation.

“This will continue and it’s exciting to see because it means boundaries will be pushed in order to achieve more, and create homes that are spatially efficient, sustainable, yet highly aesthetic.’’

The duo believes this trend will resonate on the Sunshine Coast – a place they love to holiday with family.

“The coastal living theme is characterised by key materials such as rustic timbers, raw fabrics and natural accents.

“It’s the style of design that is not saturated and has an air of easy living and something that people tend to gravitate towards,’’ Lysandra says.

When Alisa and Lysandra first came to the attention of the nation, the interest in renovation, design and architecture was escalating in popularity.

And, it’s an interest that has continued to grow.

It’s estimated that 8.4 million of the country’s 13.6 million homeowners undertook a renovation project last year. This figure jumped 57 per cent from 2013.

There are 10 million dwellings in Australia and according to research company IBISWorld, the national architectural services industry has performed comfortably during the past five years.

The 2017 Architectural Services in Australia market report shows that industry revenue is expected to reach $5.8 billion by 2018. Currently, there are almost 40,000 people employed in the industry.

This interest in design and architecture is one of the driving forces behind the inaugural Sunshine Coast Open House (SCOH).

The event will be held on October 21, giving people the opportunity to view 30 of the region’s most intriguing buildings including the Caloundra Lighthouse, the heritage-listed Maleny Lodge and private homes including Tent House by Sparks Architects and Robinson Architects’ Avonlea.

The event is a global movement. In Melbourne it attracts around 100,000 visits annually and it is hoped the local version will attract a solid following.

SCOH will kick off with a panel discussion on Saturday, October 14. The forum will focus on how architecture has changed during the past 50 years and how it will evolve.

As the founder of JMA Architects (now called Hollindale Mainwaring Architects) John is somewhat of a Sunshine Coast icon.

He has offices in Brisbane and the Sunshine Coast as well as a series of satellite offices, thanks to digital advances.

He is a modest man, and yet one of the creators of projects such as the 2000 makeover of Brisbane’s CBD mall, Veridian Noosa Residences and USC’s library.

Raised on the Gold Coast and graduating from UQ in 1972, John was attracted to our region’s environment and “free space”.

Since then, the “Sunshine Coast flavour” has evolved, he says.

“The Sunshine Coast was originally a recreational place for people and that led people to have their own philosophies… to have a spirit or sense of place.

“There is such incredible natural beauty here. I think this translated into the early architecture. [People] needed a functional house.

“Room for the fishing rods and a community room for a sleepout for the kids with flywire, no glass.”

John says a love for an indoor-outdoor relationship that originally stemmed from coastal veranda houses has continued.

“Houses on the Sunshine Coast have become status symbols… we’re moving into another phase with that. I think that will change.

“There will be more masterplanned communities rather than suburban sprawl. We did the low cost affordable housing at Bells Reach. It’s bringing beautifully designed attached houses.

“Stockland is clever now with these things. Instead of having the big mansions fronting on to the park, they bring the affordable homes into the park to continue to activate it.”

Another design the Coast will move towards is shophouses. Hollindale Mainwaring Architects are working on a project at North Lakes and hope the concept will take off at Aura.

“Shophouses is a big passion of mine. These shophouses are flexible houses.

“In other words, we have different quantums of living or commercial space depending what stage you are at in your living pattern. Lots of housing options and financial options.

“That’s where we see the future of affordable housing.”

John admits there is some market resistance to shophouses, but he believes that with the changing demographic of the family unit, the design will grow in popularity.

“I think the paradigm is definitely changing. People are more urban conscious.

“We encourage younger people to share common space rather than conquer and nail down the Hills Hoist dream.

“Globalism is at odds with regionalism. Change is inevitable.”

THE EVENT
The Open House Panel Discussion is a free ticketed event. It’s on Saturday, October 14 from 3pm at The Majestic Cinema, Nambour.

My Weekly Preview is a proud supporter of the council-funded event.

A wild ride
For the love of Dad