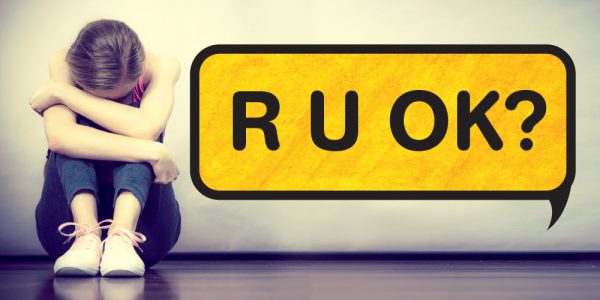 The statistics hit you in the face, hard.

In that year 3027 Australians died from intentional self-harm – one person every three hours or eight people a day, according to the Australian Bureau of Statistics Causes of Death 2015 report.

These aren’t just numbers, these are people. Mothers, fathers; someone’s daughter, someone’s son; and alarmingly the figures are continuing to grow. 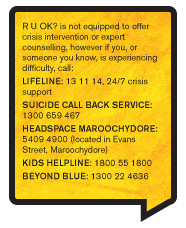 Suicide has become a grim global epidemic. According to the World Health Organisation, about 800,000 people around the world end their lives each year – that’s one person every 40 seconds.

In response, health professionals, community groups and survivors are banding together to break through communication barriers and improve the statistics.

Thankfully, they have made some progress. In March this year, data from Lifeline revealed that 80 per cent of Australians supported the development of a National Suicide Prevention Plan. In the few days following the release of these statistics, the COAG Health Council unveiled its first plan.

In May, the Federal Government earmarked $47 million in funding for frontline suicide prevention services.

While it’s a step in the right direction, the work simply can’t stop here.

R U OK? – one of the groups to receive a portion of the government funding – is gearing up to bring the issue to the forefront of the national agenda.

The ninth annual R U OK? Day will be held on September 14.

Launched in 2009 by Gavin Larkin, the organisation is a suicide prevention charity that aims to start life-changing conversations. It was born from Larkin’s own experience with mental illness – his father Barry committed suicide in 1995.

Larkin was a champion of the fact that conversation could change a life right up until he lost his battle with cancer in 2011.

“We’re making it about a conversation people should have 365 days a year.’’

Speaking from Melbourne, Maher tells My Weekly Preview he has spent seven weeks on the road as part of the group’s first Conversation Convoy. Using four vehicles that represent R U OK’s? four support steps – listen, encourage, action and check in – the team has travelled from remote communities to cities meeting and speaking with thousands of people.

Maher says the aim is to encourage friends and family to talk to those they may be concerned about.

“We did some research in the lead-up to

R U OK? Day and it told us about one in three Australians don’t feel comfortable reaching out and talking to someone.

“Supporting someone they are worried about is held hostage by stigma, fear (of saying the wrong thing). It’s about not knowing where to start and not being comfortable enough to get beside someone and ask that question. We are addressing that head on. [The campaign] has grown significantly… 80 per cent of the Australian public are now aware of the campaign.”

“We are about influencing cultural behaviour. It’s about meaningful change, giving people the capability to reach out and ask. People want to tell you their stories. 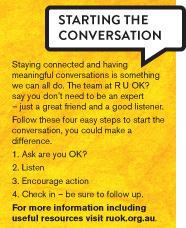 “R U OK is a tiny part of trying to strengthen the connections of relationships.”

Australian actor Steve Bastoni, best known for his roles in Wentworth, Police Rescue and Neighbours, knows only too well the benefits of strong relationships.

He credits his wife with being his saviour after substance and alcohol abuse led to depression.

“I was in my twenties when my career in film and television took off… it was really accessible (drugs and alcohol),’’ Bastoni says.

“I fell into that. I got immersed into it. It had a negative impact on my relationships, my friendships and self-esteem.”

Bastoni has been sober for almost nine years. His three children – aged 10, 8 and 5 – have never seen him drunk. He admits that staying clean requires work and support. It has also given him the drive to jump on board the R U OK? bus as an ambassador.

“My whole reason, my motivation for getting on board, was that I had personal experience,’’ Bastoni says.

“The last few years of my addiction, I didn’t see any point living. I seriously did contemplate taking my own life. And I’m grateful that I didn’t do it. If I had, I would have been killing the wrong bloke.

“In my process of recovery I learnt who I am and managed to let go of the old Steve. I’m not a bad bloke.”

Bastoni believes that early prevention is key in preventing tragic circumstances and says mental health and the wellbeing of others should be on our radar daily.

Breaking down the stigma associated with mental health is also on his agenda.

What goes on ‘between our ears’ should not be a source of shame, but a shared experience.

“Sometimes people don’t feel comfortable reaching out, but it’s up to us to reach out. To see those changes in people and ask ‘R U OK?’.

“I’ve played the tough guy. I’ve been conditioned to think that the Aussie bloke keeps up the tough guy [act].

“Australian blokes are cottoning on that it’s not working. We’re not expressing those emotions in a healthy way. It’s about encouraging blokes to say ‘I’m not doing well, I could do with a hand’.”

With more than 300 million people suffering from depression around the globe, the question remains as to why stigma still surrounds mental health.

Doctor Rhiannon Bell from Mooloolaba’s Psychology Cafe says part of the issue is that society struggles with the concept of depression being an illness. Depression and anxiety does not discriminate – it can target anyone at any time.

Dr Bell says it’s important to ask the tough question – are you OK?

“What they are hearing is I see you, I value you and I care. I often ask clients who have been through loss about how people are responding. People just ignore the pain because of awkwardness.”

Encouraging communication from a young age is also a vital tool in combatting depression and suicide, Dr Bell says.

“It’s about becoming more comfortable with emotions and starting with young kids. It’s having the family culture of talking about feelings. We need to start educating kids young. Don’t shy away from these topics.”

He knows only too well the effects of depression and anxiety and aims to breakdown the stigma and address the health issue head on.

The 18-year-old, who has become one of the region’s most talked about artists after winning the 2016 Voice of Urban Country Music Festival and 2016 Gympie Muster Talent Search, is a national

ambassador for youth mental health organisation Headspace, and an advocate for other young people struggling with the illness.

“I was a pretty sad kid who had been bullied at school and had suffered parental abandonment.

“I was always teased for being raised by my Nan and was taunted by comments like ‘your dad hates you’.

“My father left when I was around six months old. I was with mum for a little while but ended up with Nan early on in life. I had a lot of panic attacks back in the day. I had a hard younger life but it made me strong for life,’’ he tells My Weekly Preview.

Today, Hope is a well-spoken, polite and down-to-earth teenager – someone any parent, or grandparent, would be proud to call their own.

He is studying at TAFE, recording his first record, has performed alongside the likes of country music star Travis Collins and has his sights set firmly on Nashville fame.

The teen credits his role with Headspace as his saviour. He joined the organisation’s committee when he was 12 years old and hasn’t looked back. Headspace Maroochydore has provided more than 11,700 occasions of care for young people.

“It pushed me forward. I evolved and became a stronger, confident person. There are some brilliant counsellors, brilliant people, programs for younger people. Anyone from the ages of 12 to 25 can walk in and automatically are helped by a counsellor.’’

Hope says Headspace and events like R U OK? Day have helped him to learn about his strengths as a survivor. Through his music, he hopes to inspire people not to give up on their dreams and to not let past experiences dictate the future.

“I think it can never be underestimated how important it is to ask are you OK?

“Everyone needs to know someone cares. It can make a huge difference.

“I would like to throw out a challenge to young people: connect with someone you normally wouldn’t because you think they are too shy, quiet, sad, different and have a chat.

“With R U OK? Day, the whole concept of asking are they OK can change their life. It can mean a 100 per cent to someone who is going through anxiety, bullied, depression.”

For help and support phone: