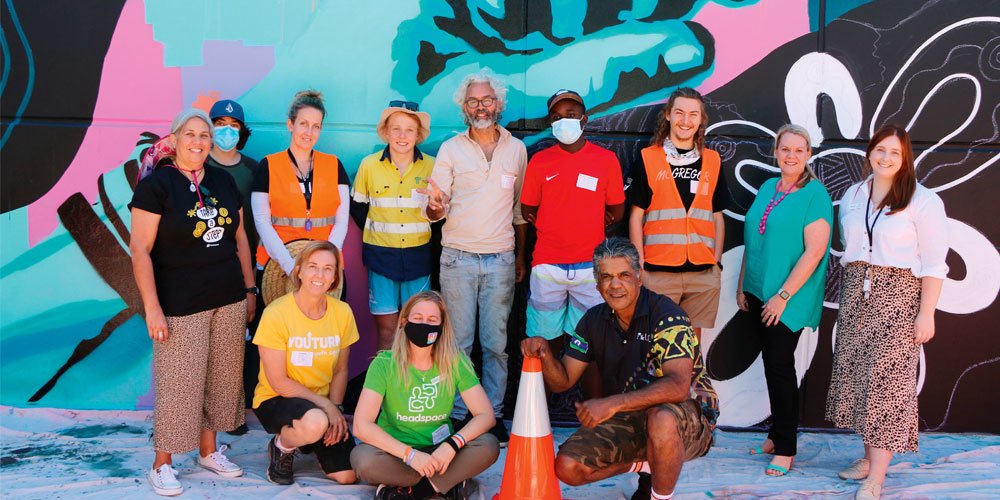 Youturn – Jandamarra Cadd (centre back) and Sarah Sculley (back, third from left) with the youth group and Youturn staff

When a group of young men came together to express their ideas on how to support their age group and gender’s mental health through artwork, they came up with big, deep and thoughtful concepts. Fortunately, they had a space big enough to illustrate these ideas,

Headspace Day, on October 6, is a national day of support for the mental health and wellbeing of young Australians.

To mark the occasion, Headspace Maroochydore and its lead agency Youturn Youth Support, together with Kawana Shoppingworld organised an urban art group project for young men aged between 12 and 25.

Mr Cadd says he came to the project with no idea of what would be expressed.

“Sally and I got together with the young people to orchestrate the mural and find out what they wanted. It could be anything.

“It turned out their ideas were about community, connection and support.”

Mr Cadd’s award-winning art is known for its iconography frequently depicting connection between Indigenous and non-Indigenous people.  The young men welcomed this idea and with Ms Sculley, the project, blending First Nations and contemporary styles, began.

The size of the mural prompted Ms Sculley to lament the physical act of painting a mural saying that while Crossfit, volleyball and swimming keep her fit, painting a mural is another form of exercise itself. “I’m applying  to have it accepted as an Olympic sport for 3032,” she jokes.

“We are more than just education,” Mr Cadd says, and goes on to relate how in Indigenous culture an understanding of nature’s signs is an integral part of life.

“The blooming of a flower could mean the coming of a certain fish or mud crabs.”

The mural depicts a vibrant colour palette which reflects youth, energy and positivity, and features Kawana wildflowers along the coast and hinterland region. The central focus and hero image of hands reaching out, represents the idea of connection and community.

Headspace CEO Dr Tanya Bell explains: “Through initiatives like this Urban Art project, we aim to help build resilience, develop social connections, and inspire young men to talk openly and have a voice on issues important to them.”

One in seven young men aged between 16 and 24 experience depression or anxiety each year – yet a meagre 13 per cent seek help. Suicide is the leading cause of death for young men in Australia. In the last financial year, Youturn Youth Support supported 5400 young people and provided almost 21,000 appointments. Sponsors for the mural included Kawana Shoppingworld, Haymes, Montana and PaintRight Maroochydore.

Donate a phone to save a life
Giving victims a voice