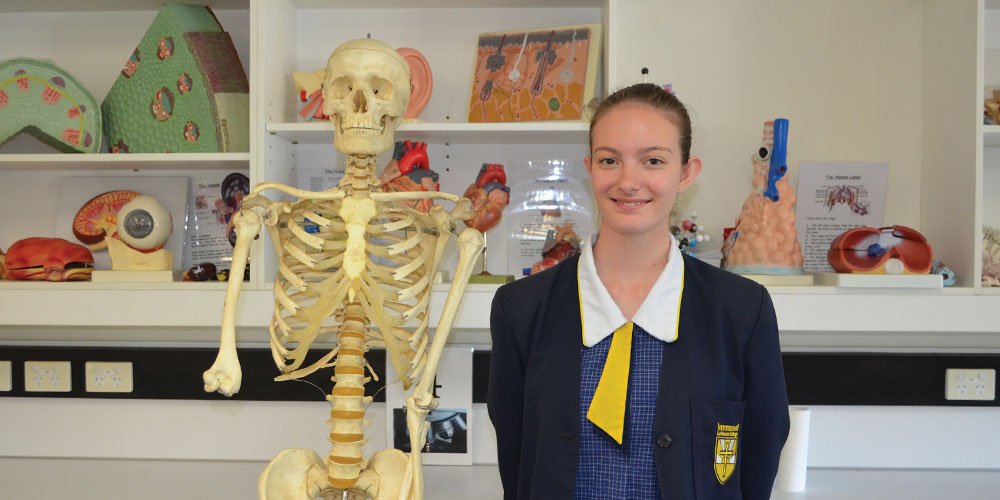 “It was so inspirational to see a woman in science who has actually succeeded and made a difference in society,” says Jocelyn. “I think it’s really hard for women in any career to get to the top, but science is particularly male dominated.

“Tanya Monro worked so hard and had to sacrifice many things, but it’s people like her who actually pave the way for the future.

“I think people are going to be a lot more supportive of women in STEMM, because they know how important it is to not only build diversity, but people have come to realise women are really important in creativity and the generation of useful, innovative ideas.”

The Immanuel Lutheran College student was selected to attend the National Youth Science Forum Year 12 program in Canberra. It’s a prestigious honour that includes a rigorous selection process. Unfortunately it was cancelled due to the bushfires, but it was an acknowledgement that she’s on the right path.

Jocelyn plans to study medicine when she finishes school, following in the footsteps of her sister Olivia, who is studying a Bachelor of Medicine and Surgery at James Cook University. Last year, Jocelyn was the University of Queensland’s Science Ambassador for her school, which further cemented her love for STEMM.

“I was able to lead the science club for the junior school, which was really good,” she says. “I was able to inspire the younger kids to pursue their science aspirations. Particularly the girls, when they were there, you could see they were a bit nervous. But I think seeing an older female doing science gave them hope.

“It was exciting to be an inspiration to a younger generation, just like I’ve been inspired. Seeing Tanya Monro was a huge inspiration for me. I realised it is possible for a woman to get where she wants without sacrificing family life and children. It was good for me to be able to pass that on.”

Strong role models for women and girls in STEMM are vitally important if we are going to see more diversity and equality in these traditionally male-dominated fields. Great strides have been made over the past five years, but we still have a long way to go.

According to the United Nations, less than 30 per cent of researchers worldwide are women and only around 30 per cent of all female students select STEMM-related fields in higher education. Globally, only three per cent of female students study information and communications technology, five per cent study maths and statistics and eight per cent study engineering. Long-standing gender biases steer women away from STEMM, but programs such as the SAGE (Science in Australia Gender Equity) framework are now in place to promote and support initiatives aimed at encouraging women, trans and gender-diverse people to participate in STEMM and to address systemic barriers to equity.

Dr Marguerite Evans-Galea AM says the importance of the SAGE initiative cannot be overestimated. An internationally renowned scientist who conducts research in gene therapy and neurodegenerative diseases, she is the co-founder of Women in STEMM Australia and is the executive director of the Industry Mentoring Network in STEM at the Australian Academy of Technology and Engineering.

“We now have this fantastic SAGE framework, which is an incredibly symbolic and powerful message to send to woman across the entire STEMM sector,” says Dr Evans-Galea. “It says STEMM is for anyone. It says STEMM is for everyone. It’s valued, you’re valued, your contributions are valued and respected. That alone is a huge shift. It’s just fantastic progress. I think over the last five to six years we’ve made huge strides. We have moved from zero conversations happening to action.”

Ms Evans-Galea became interested in science while studying music at university and went on to obtain a PhD in molecular biology from the University of New South Wales. Last year, she was appointed a Member of the Order of Australia in recognition of her service to women in STEMM.

“A lot of today’s students don’t see it, because the student cohort is so diverse and gender balanced,” she says. “The higher up you go, it really confronts you. That’s exactly what happened to me. As I moved higher up in my career, there were fewer and fewer women, more men, more white Caucasian men. The diversity would disappear.

“I’ve been labelled as aggressive and bossy. I think when a woman expresses her ideas and her values in a really assertive way, even though it’s respectful, she’ll be labelled as bossy. I did face that expectation – that women will be quiet and mild and meek and when you’re not, you’re not fitting the stereotype.

“I think it’s worse in STEMM, just because of the hyper-competitive nature of science. People are pitched against people on a regular basis. You’re continually comparing yourself to others at your level and the next level up.

“We still have a huge way to go. When you talk to women who are in the lab or at the bench or in the clinic or in the field, has it really changed for them? They still face everyday sexism, bias, ongoing issues that occur in academic culture.

“Women face career disruption for family and caring roles and health issues. It puts a gap in your track record, out of the lab, out of the field, so therefore your work is not actually happening.

“If your work is computer-based, you could do it from home, but most requires special resources so you actually have to be there. That affects women because women tend to be the primary carers. A lot of organisations are introducing research assistants or technical support to keep that track record going. It’s something I wish I’d had in my career.

“We have a bit of a boys club culture in STEMM. We have to think more inclusively – how do we collaborate, how do we work together, the times we have meetings.

“These are simple things. It doesn’t have to be every single meeting, but as much as possible, we could have meetings between 9.30am and 3.30pm.”

Dr Evans-Galea says it’s important students are informed about the many career possibilities in STEMM.

“You don’t have to become a researcher. It’s not all about research. We need to break down those stereotypes. It’s not just about a person in a lab coat. There are people working in government doing policy that heavily requires STEMM skills, for example data analysis and problem solving, critical thinking. STEMM is incredibly widely used across education.

“I think it’s really crucial students understand that as early as possible. So often careers councillors at school are going by the stereotypes – oh, science leads to research. With STEMM, you can go be an industry leader, an industry executive, you can travel the world as a business leader. It’s very rewarding. You’re changing lives and bringing hope.”

Dr Ingrid Rosenberg is an advanced physiotherapist with Sunshine Coast Hospital and Health Service who champions women in STEMM. She says it’s crucial women support each other.

“It’s a shared responsibility that we really empower and promote women to rise,” she says. “Sometimes what females do is feel quite threatened by other females and try to do the opposite.

“I’m on scientific committees and organising committees for conferences. I’m right at the front to ensure when we invite keynote speakers, there should be females – it should be balanced. We should be trying to get at least 50 per cent females on panels.”

Dr Rosenberg strongly advocates for women in science. Originally from the Netherlands, she has lived in Australia since 2006 and completed her PhD in 2019. She has juggled her career as a practicing physiotherapist primarily working with stroke patients with completing her PhD and raising two sons, who are 10 and 11. She returns to the Netherlands every year.

“I think Australia is lagging behind,” she says. “The Netherlands is a bit more progressive and liberal. In Australia, there’s quite a difference in pay and you can see overall the trends in fellowships going more to males. We really are trying to pave the way so the next generation can climb up and don’t have it as hard. When you look back, it was quite difficult for females to do anything in STEMM. It’s getting better and better, but we have to work on that and empower other females.”

The University of the Sunshine Coast was recently recognised nationally for its efforts to advance the careers of women, trans and gender diverse people working in STEMM. On February 20, the university received an Athena SWAN (Scientific Women’s Academic Network) Institutional Bronze Award for boosting the recruitment and progression of female postgraduate students, and its advisory committees to specifically encourage full- and part-time staff, particularly women, whose achievements made them suitable candidates for promotion.

The bronze award, an initiative of SAGE (Science in Australia Gender Equity), requires a higher education institution to have demonstrated a solid foundation for improving gender equity in STEMM. USC Deputy Vice-Chancellor (Academic) Professor Tim Wess attended the presentation in Adelaide. “Like most Australian universities, there are more women in academic positions but more men at professional level, especially in the sciences,” he says.

“However, in 2019, three of USC’s four staff who were promoted to professor were women, and our new Head of the School of Science and Engineering is a female professor. We don’t want to only recruit women at higher levels, we want to grow our own talent with a culture that supports female staff members.”

Continue Reading
You may also like...
Related Topics: STEMM, Students