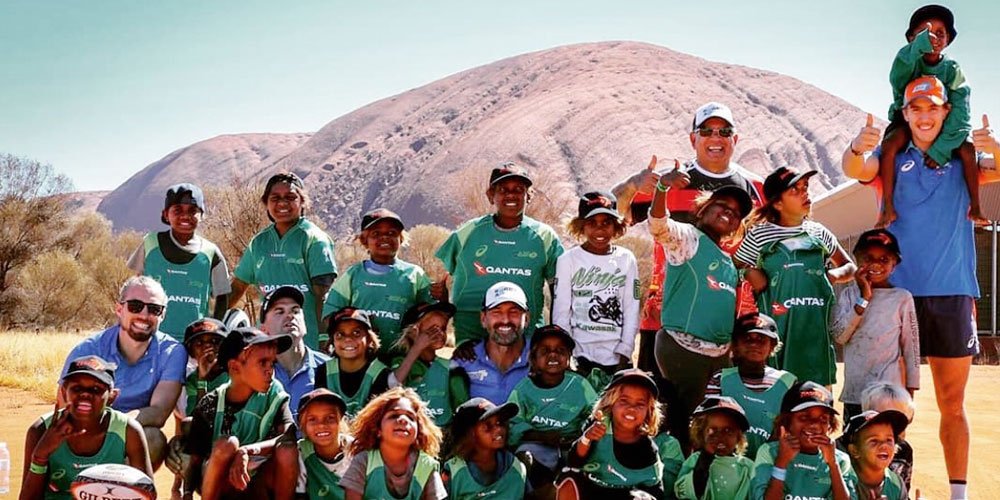 From little things big things grow. In this case, it took a couple of mates, having a bit of a chinwag over a few beers and feeling grateful for the success they had found in their own careers, to wonder how they could ‘pay if forward’.

“Then we decided to look in our own backyard,” Mr Duff says.

That decision sowed the seed that grew into the Sporting Chance Foundation – a not-for-profit organisation established in 2018 to create meaningful and enduring change within the Indigenous community.  Their idea is to help aspiring athletes suffering serious sporting injuries, realise their full potential through connecting them with appropriate medical treatment.

Just two weeks ago, 18-year-old Willow Wells of Townsville was in the Sunshine Coast University Hospital undergoing two shoulder operations. The teenager, with dreams of becoming of champion boxer, was sparring with her twin brother when she sustained serious shoulder damage.

Without the operation that removed a shard of broken bone and another operation that included the implant of a metal plate and two screws, Willow’s dream would have been over. Now, she is looking at a four-to-six-month recuperation period, and a sporting career, again made possible.

The operation by Dr Shane Blackmore, accommodation and travel were all made possible through the Sporting Chance Foundation.

Willow’s mother, Lisa McKellar says she was overwhelmed at the welcoming and understanding of everyone who made the operation happen.

“As an aboriginal mother – the understanding of family and culture was amazing.”

“It just felt like my own family was organising everything, it all went so smoothly,” she says. 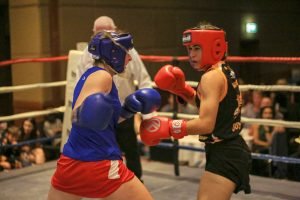 Willow Wells with red helmet sparring in the boxing ring

Willow’s grandparents made a 1600-kilometre round trip from Cunnamulla to the Sunshine Coast and they too were looked after and made comfortable.

“I haven’t really got words for how good this was,” Ms McKellar says.

Andrew Duff has a background in rugby union and in 2019 his connection with former Australian sevens assistant and current First Nations rugby manager at Rugby Australia, Jason Hodges, saw him join a 4500-kilometre tour to identify future First Nations rugby sevens players around the country. The tour included dropping into places such as Orange, Alice Springs and Coober Pedy to spend time, have a chat and do training drills with Indigenous players. The experience encompassed a diverse range of situations.

“In Alice Springs we played rugby union with inmates at the youth and men’s detention centre,” he explains.

Mr Duff revelled in the experience and  it further convinced him of the importance of making appropriate medical treatment available to the people who needed it.

Since beginning the program the foundation has provided surgical care, hospital stays and accommodation in locations including Sunshine Coast University Private Hospital as well as St Vincents and Cabrini Hospital in Melbourne. Rehabilitation from physiotherapists has come from around Australia including locations in Townsville, Sunshine Coast, Brisbane, Sydney, Melbourne, and included remote telehealth consults for those more isolated recipients.

In particular, the Sporting Chance directors wanted to say a special thank you to Ramsey Health and Medacta Corporate orthopaedic company, who has made major financial contributions. On the organisational side, they also wanted to thank Rebecca Adams for her assistance and Melanie Jacobson from MJJ Accountants, who handles the financials. Dr Rodda praises the co-operation of surgeons, physiotherapists, allied health professionals and hospitals.

These professionals understand that a sporting injury such as an anterior cruciate ligament (ACL) rupture of the knee during adolescence can significantly impact a promising career, particularly if the athlete doesn’t have private health insurance or is unable to access timely specialist medical care. 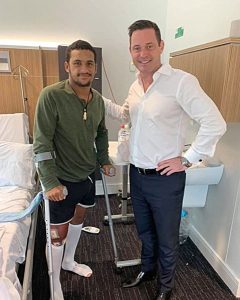 Mr Tulloch says he became involved in the program because he saw value in supporting these athletes return to the sporting field, because treatment not only helped physically, but could also take a toll on mental health.

Getting the word out about Sporting Chance has involved both old and new communication methods. On the one hand Jeremy Chen, a specialist in digital and event marketing is helping to build the foundations’ profile and corporate partnerships.

As a cyclist and runner, he has experienced multiple knee injuries and is pleased to be able to assist young aspiring athletes on their road to recovery.

On the other hand, Mr Duff, says he has come to understand the power of the ‘bush telegraph’.

“Word of mouth is a powerful communication in the Indigenous community,” he says. “And it is often related through tribal elders.”

Dr Rodda says the foundations’ current  resources allow them to undertake about 12 operations per year.

It’s a big undertaking, including finding companies and people willing to donate their services such as accommodation, flights and administration.

If you are able to help, particularly with flights, please  contact info@sportingfoundation.com.au.

The artwork in the Sporting Chance Foundation’s logo is focused around the power of potential for an individual and the impact they have on others. The semi-circular shapes represent the ripple effect of positivity from one person to another, sporting peers and community people coming together, a place of belonging for all. The founders wanted these shapes to represent the vision of ‘aspiring athletes aspiring their communities’ and a focus on the people.

The inner circles that surround the individual represent a meeting place and a safe place. There is a focus on collaboration, embracing teamwork when people and groups come together, and it signifies the power of sport as a positive tool for engagement.

The boomerangs depict ‘coming/or giving back’ support for sporting peers and family. As we give to the community, we hope our athletes will engage as leaders and continue to do the same. The circles around the outside reflect strength and a sense of protection – the Sporting Chance Foundation.

By incorporating the red, yellow and black colours as those portrayed in the Australian Aboriginal flag, the Foundation wishes to acknowledge the journey and all who play a role.

The  logo was created by Karen Seage, a proud Quandamooka woman of the Nunukul mob from Minjerribah of North Stradbroke Island. Karen works for a Logan-based creative agency that is a proudly Aboriginal business with an active Indigenous employment policy and a strong commitment to employ from the local Logan community.

Karen came back with several design options and they took these to the community for feedback. They spoke to a range of  people from First Nation’s communities, including aspiring athletes to Elders and received great feedback. Visit sportingchancefoundation.com.au.

Continue Reading
You may also like...
Related Topics: volunteer