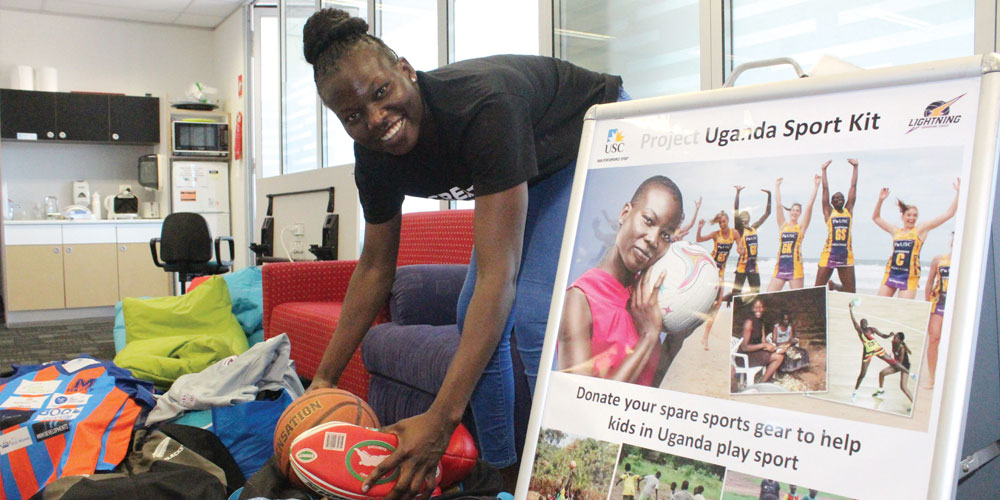 Sunshine Coast Lightning goal shooter Peace Proscovia has been spearheading a campaign to collect second-hand sports shoes, clothing and equipment to send back to her homeland of Uganda to help children and teenagers reach their sporting potential.

Ms Proscovia has received overwhelming support from the Sunshine Coast community and is now ready to transport the donated gear to where it will have a life-changing effect. However, she suffered a blow when she discovered the cost of shipping the goods to Africa would be in the vicinity of $7000.

She is running a GoFundMe campaign to raise the funds, with $4140 raised at the time of writing.

“We have over 500 kilograms of equipment to ship,” says Ms Proscovia. “This sporting equipment will change lives. It will provide hope to these children and make them see the world in a brighter way. The people in Uganda cannot afford even basic sports shoes and clothes and this will help them play sport, become healthier and lead better lives.

“I’m doing this because I feel for the vulnerable people. I feel that if I have been there and I have gone through it, I should also help someone else. People should not achieve their careers painfully. We can’t help them forever but if we provide a light for them, we can make their lives better.”

Born in Arua in the northern region of Uganda, Ms Proscovia remembers what it was like for her growing up and discovering a love of netball.

“The most important thing to me was just being given the opportunity to touch the ball,” she says.

“I loved the sport from the beginning. I didn’t have sports equipment; I trained barefoot on gravel. I had no skirt or dress or training equipment. The balls were not proper balls, we didn’t have proper netball rings. The rings we used were made out of sticks. My legs have so many scars from falling while playing netball.

“Uganda is divided into four regions,” Ms Proscovia adds. “The equipment isn’t going to my village but to all the different areas of Uganda. A bit of it will go there but at least if I can distribute it to all the four regions, that would be wonderful.”

Ms Proscovia first began playing netball in 2002 at the age of 12 and began competing seriously at the age of 16. Now 30, she is the captain of the Ugandan national team and before joining the Lightning was a member of the Loughborough Lightning team in the Netball Superleague in the United Kingdom.

Based in Maroochydore, she has just completed her first year of a three-year contract with the Lightning.

“The first year with the Lightning was amazing,” she says. “At first I thought I couldn’t perform well. When I looked at the profile of the players in the league, I totally undermined myself.

“I never thought I could compete with the world-class players because I didn’t rate myself as world-class, but playing with them gave me confidence. Stepping in there has made me strongly believe in myself that I could actually achieve something.”

A family’s first Christmas surrounded by love
Is this Australia’s new normal?