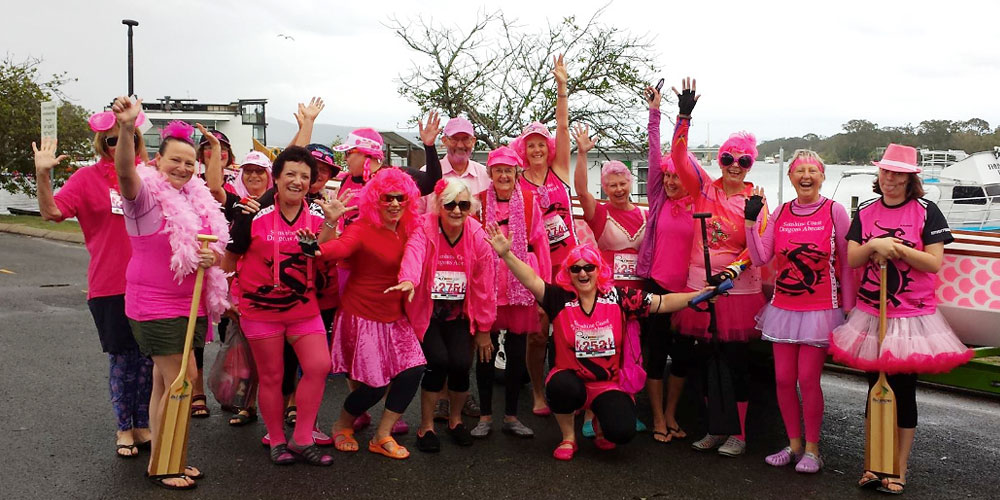 Bumping into a friend she hadn’t seen for years was the catalyst for a positive change in the life of breast cancer survivor Audra Kearney that has seen her travel to Italy to compete in the International Breast Cancer Paddlers’ Commission (IBCPC) Dragon Boat Festival with her Dragons Abreast family.

Mrs Kearney was diagnosed with breast cancer in 2010 and two years later, she bumped into a friend in Medicare, who had also undergone her own cancer battle.

It was then that she learnt about Dragons Abreast, an organisation of breast cancer survivors who paddle in dragon boats as part of their post-operative rehabilitation.

“She couldn’t have come at a better moment,” Mrs Kearney says.

“I was a bit down and I said, ‘If you look that good, I want to be looking like that, take me on board’.

“Dragon boating was something totally new for me. Since I started a family, I was too busy running my kids around, so when the opportunity came up, I grabbed it with both hands.”

The Pacific Paradise resident says she immediately felt she had found her place with the women in the Sunshine Coast team, The Pink Sea Serpents, who range in age from 46 to 82.

“You have camaraderie within any sporting team, but the pink ladies have something else – we are there for each other and we have travelled the same path, so there is a strong connection,” she says.

“We don’t get together to talk about our illness, but you know that there are people here that can listen and understand if you do need to talk.”

The Pink Sea Serpents, formerly known as Titty Titty Bang Bang, were formed in 2005 and Mrs Kearney took on the role of president in 2015.

She competed as a member of a Redcliffe club in the IBCPC Dragon Boat Festival when it was held in Florida in 2014. Last week, Mrs Kearney was excited to be paddling alongside her Coast teammates in a partial team of 13 in Florence, Italy.

Mrs Kearney says the atmosphere is “electric” at these events and members from other clubs would help complete the full team of 22 to allow them to compete, which is not uncommon at these events.

Despite only having a partial team, the Pink Sea Serpents secured silver at the state competition on Lake Kawana in the 200-metre and 500-metre events in February and bronze in the same events at national level in March.

Mrs Kearney says she hopes more members will come on board so they can reach their full potential and “give Brisbane a run for their money”.

Mrs Kearney says pink ladies get the best of everything, with the ability to be a competitive sports paddler, a social paddler and a breast cancer paddler.

To find out more about how you can join, visit dragonsabreast.com.au, click on Our Groups and click on Queensland to select Sunshine Coast – Maroochy River Resort.

Titanic effort pays off for Buderim writer
Emma Isaacs: “I know I have no balance”