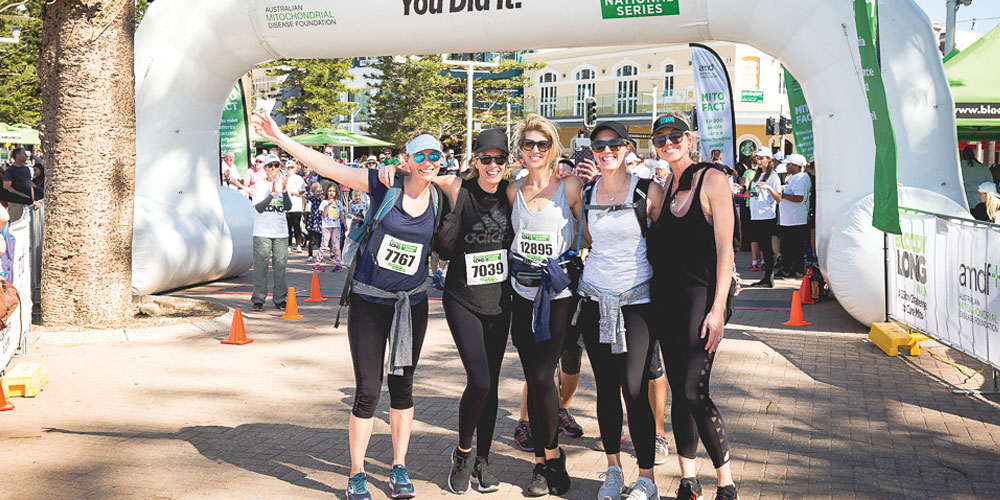 More than 900 people taking 46,200 steps along a 35-kilometre route in eight hours. Sounds challenging right? But when it’s for a good cause, the hard work is most definitely worth the effort.

On June 16, hundreds of like-minded people will take part in the inaugural Sunshine Coast The Bloody Long Walk (BLW).

Renowned for being a fun community event with stunning scenic walking routes, the national fundraising series of the Mito Foundation will have Coast residents trekking from Mount Coolum to Mooloolaba Beach.

The local event will launch a series of 10 walks to take place around Australia from June through to November to raise vital funds for research to find a cure for mitochondrial disease, a debilitating, potentially fatal genetic disorder that robs the body’s cells of the energy they need to function properly.

BLW project manager Jane Hudson says although it is not a well-known disease, more than one in 200 Australians – at least 120,000 people – have genetic mutations that predispose their mitochondria, the powerhouses of our cells, to fail prematurely.

Depending on which parts of their bodies are most affected and to what extent, people with mito can lose their sight or hearing, be unable to walk, eat or talk normally, have strokes or seizures, or develop heart problems, liver disease, diabetes, or respiratory or digestive problems.

Mito Foundation CEO Sean Murray says while the BLW is the foundation’s major annual fundraiser, it is also about raising awareness of the symptoms of mito to ensure people can receive a proper diagnosis and healthcare.

“Many people with the genetic mutations implicated in mito are symptomatic but undiagnosed or misdiagnosed, some are not yet symptomatic, and others are unknowingly at risk of passing the disease on to their unborn children,” he says.

“One Australian child born each week – 50 children every year – will develop a severe or life-threatening form of mitochondrial disease and half will die in childhood, making mito the second most commonly diagnosed serious genetic disease after cystic fibrosis.

“A further 1000 Australian children born each year may develop a mild or moderately disabling form of mito during their lifetime, sometimes not until adulthood.”

The foundation has funded major research projects, including a joint initiative with the Australian Genomics Health Alliance, which will provide people suspected of having mito with free genetic testing. The foundation also provides a helpline, support groups and information sessions.

Ms Hudson says the BLW began in 2013 with a walk in North Sydney with 350 people and they have grown rapidly since. This year, there are 10 locations that are expected to attract a total of 22,000 participants.

“The name is a great drawcard and it’s also a good distance,” she says. “It’s not outside of most people’s ability with a little bit of training and it’s a great personal challenge for an awful lot of people.”

The mother-of-three will be flying up from Sydney to experience the stunning Coast route with three girlfriends, enjoying an extended stay. And it seems many other interstate and international participants have the same thing in mind.

“There has been so much support from the Sunshine Coast and we are absolutely delighted; the Coast is a great destination and people intend to make a weekend of it,” she says.

“We’ve had people of all ages enjoy BLWs around the country. Children come along with their parents and we’ve even had an 80-year-old participate before. It’s a really fun community event.”

Participants are asked to raise at least $350, which is $10 per kilometre, and they can be sponsored through the BLW website. The Mito Foundation has created training and nutrition programs that participants can access free from the website, with beginner and intermediate options.

Visit bloodylongwalk.com.au/sunshine-coast and when you sign up, use the code MWP at the checkout to receive $20 off the Sunshine Coast event entry price.

Or, if you are feeling lucky, you can enter a competition through My Weekly Preview to be in with a chance to win two entries into The Bloody Long Walk.

If you don’t want to walk, you can sponsor walkers or teams or cheer walkers, joggers and runners along the bloody long way from 7am to around 4pm on June 16. The first participants are expected to cross the finish line from 10.30am.

Dig deep for Dooey
Kids at the coalface