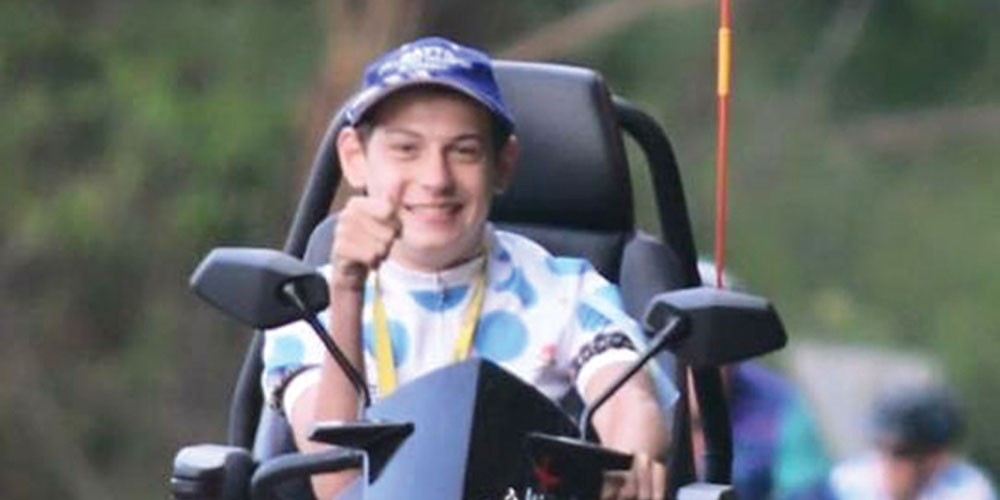 Josh Paix is a regular in the Buderim 9 Challenge

Josh Paix may not be able to ride a bicycle, but that hasn’t stopped the Nambour teen from becoming a force to be reckoned with in one of the toughest cycling events in the region – the Buderim 9 Challenge.

The 18-year-old has become the only person to achieve two consecutive years as the highest fundraiser for the physical challenge where cyclists set out to conquer nine of Buderim’s tallest hills over a 76-kilometre track in less than three hours.

And, Mr Paix is determined to secure the title once again this year.

Growing up with cerebral palsy, he knows how important the work of Buderim 9’s beneficiary Choice Passion Life (CPL) disability support services is for local families.

“CPL has been very supportive over the years both guiding and supporting in my treatments and physio and the numerous hours of fundraising they had to do before the Buderim 9 came along,” he says.

“While it’s anybody’s guess who the biggest fundraiser will be, as there are so many people fundraising, I would love my name to be on [the perpetual trophy] three times.”

Mr Paix says he loves participating in the event by riding his electric scooter alongside the other 300 or so cyclists. It is an annual tradition he has enjoyed since the event’s inception in 2010.

“To have a mobility scooter like mine costs about $10,000 and it would not be possible without the support of government funding and the support of my parents,” he says.

“My scooter will happily do around four hills and I help some riders up the hill as well. They hang onto my chair as they get a breather. Going up the hills I can stay with a few of the riders, but going down the hills they zoom past me like an aeroplane.

“I appreciate their support as I ride with them. The atmosphere at the finish line is amazing with lots and lots of people cheering you on. My face gets sore from smiling.”

When asked what his secret is to gaining the top fundraising spot, Mr Paix says it’s finding a combination of friends and family as well as local businesses who are willing to support his desire to give back.

“I would like the Buderim public to come along and watch part of the course to get out and support the efforts of the riders climbing nine of Buderim’s most picturesque hills. It’s a challenge, not a race and I hope everyone has a safe and enjoyable day,’’ he says.

Registrations are still open for the eighth annual challenge, which will be held on December 16 from 5am to 8am. For more details, visit buderim9.com.au. Proudly supported by My Weekly Preview.

Continue Reading
You may also like...
Related Topics: Buderim 9, Charity

Food for life
All in a day’s work