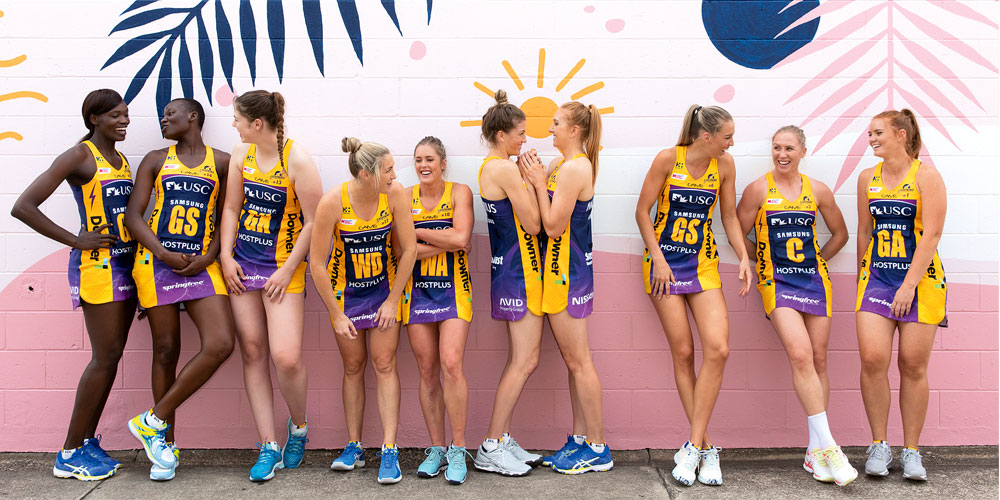 There is electricity in the air as the Lightning charge up, ready to storm through another Super Netball season.

The 2019 squad looks a little different to the team of women who secured back-to-back premierships in 2017 and 2018, with former captain Geva Mentor and prolific goal shooter Caitlin Bassett among the four players who parted ways with the Lightning at the end of the 2018 season.

The new-look Lightning will be captained by Laura Langman with Karla Pretorius as vice-captain. The team have been flexing their muscles throughout the #TeamGirls Cup pre-season tournament, a three-day event that featured all eight Super Netball teams at the Queensland State Netball Centre earlier this month.

Traditionally, the Lightning have started off at a walking pace each season and built powerful momentum – a strategy that earned them the silverware for the first two years of the club’s existence.

Ms Taurua says it has become somewhat of the Lightning style, but she is aiming for a “better start”.

Fans and sponsors alike cannot wait for the Lightning’s 2019 campaign to kick off with the first-round match-up against the Collingwood Magpies on April 27.

This will be the first time the Lightning come up against Ms Mentor. “Netball Australia do a wonderful job building the excitement of it all, but there is no nervousness about coming up against Geva and as far as I’m concerned, those players are still part of the Lightning family and there is always going to be huge respect going both ways,” Ms Taurua says.

“We’re all waiting to see how the new team line-ups pan out and how individuals are going to make a difference to the overall performance of each team.

“But once you put you’re colours on, you’re with your team and it’s all business out on the court.”

With pre-season kicking off on November 12 last year, Ms Taurua says the new Lightning recruits have well and truly adapted to the club’s routines ahead of the season opening.

“They each bring in their own flavour and their own style, not only on the court but off the court as well,” she says.

“It’s been quite harmonious at this stage; everyone is toiling away, but I think we’ve come together quite easily and that’s because of the characters and personalities we have in each of the individuals on the team. We have a core philosophy to work hard and get on with it.”

With expansions being carried out at their home ground, the USC Stadium, spectator capacity for home games this season will be increased by around 1000, offering more fans the chance to see their idols in action on the court.

Their first home game is not until round five, when the Lightning come up against the Canberra Giants.

Ms Taurua says the 2019 season is shaping up to be quite unpredictable, with the Adelaide Thunderbirds, who have been on the bottom of the table for the last two seasons, looking quite strong with some international recruits brought on over the off season.

“The [Melbourne] Vixens are always strong no matter what and play some hard netball with good possession, and with the services of Geva and Kelsey Browne, Collingwood will also be looking to get some good results. It seems like the gap is closing and that is exciting for the competition.”

With a clearer understanding of what works for the Lightning, Ms Taurua says the club, which was founded in 2017, has stronger foundations from which to spring from this year. “It’s about getting out on the court and looking at combinations and looking to consistently improve our performance,” she says.

As far as thinking forward to a third premiership, Ms Taurua says there was a lot more “unspoken pressure” last year than what they are feeling coming into this season.

“There’s always expectations surrounding back-to-back wins and we managed that,” she says. “This year, with a change-up in our roster, we have provided uncertainty to our competitors … and because of that, it feels like a new year and it’s quite exciting to be in the pot with everyone else.

“We will be working hard to make the top four, and it’s not guaranteed by any means, so we are not feeling that extra pressure or feeling like it’s going to come with ease. We’ve got to work hard like everyone else and we’re ready.”

The region will once again benefit from the televised exposure to hundreds of thousands of netball fans around Australia and New Zealand and the entire community is once again preparing to back our elite national team.

AVID Property Group continues to support the team. “The Sunshine Coast Lightning has shown us how a team can build the spirit of a community and from that comes true success,” says AVID’s Queensland general manager Bruce Harper.

The Queensland cartoon taking on the world
Making history