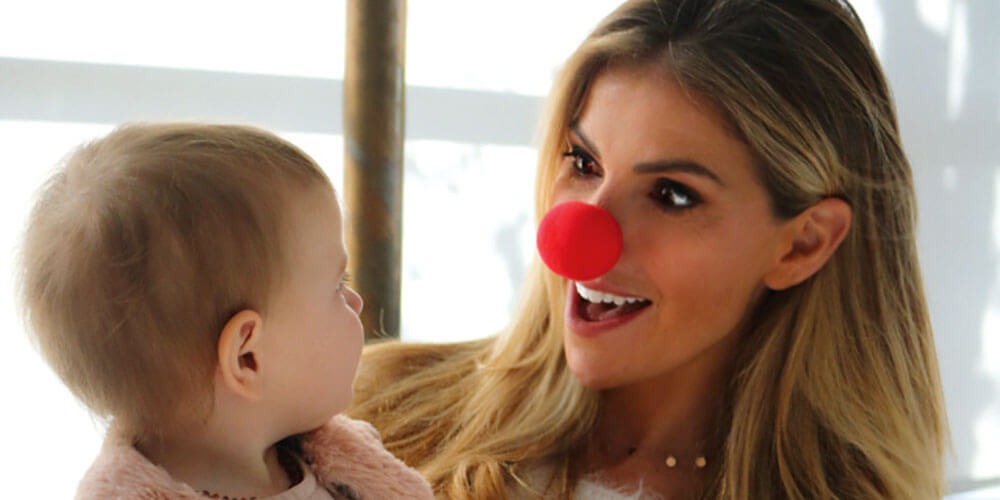 Australian model and former Miss Universe contestant Laura Csortan is a familiar face at red carpet events, but this month she is ditching her ususal high-end fashion and will be sporting a look with a difference.

And, while the television personality has been goofing around with a red nose once a year for as long as she can remember, when she became a mother in late 2016, the Red Nose Day campaign took on a much more serious note.

Every day in Australia, nine children under the age of four die suddenly and unexpectedly, with causes including stillbirth, SIDS and fatal sleep accidents.

Red Nose’s goal is to reduce this number to zero.

As an ambassador for the charity that works tirelessly to reduce sudden and unexpected death in infancy, Ms Csortan says the cause is one that is very close to her heart.

She and 18-month-old daughter Layla will join thousands of people around the country in marking the 30th anniversary of Red Nose Day on June 29.

“With a little one of my own, I couldn’t think of a worse thing to happen. The more research we can fund the better, as the statistics we see today are heartbreaking,” she tells My Weekly Preview.

“It just gives me goosebumps to think about anything happening to an innocent life without the parents even knowing.”

Ms Csortan, who is a regular on The Morning Show and presented on The Great Outdoors for seven years, says she relied heavily on the information from Red Nose to learn the best safe sleeping practices for her daughter and still checks on her regularly throughout the night.

Earlier this year, Red Nose launched the safe sleep eLearning program for childcare providers, the latest initiative made possible due to the generous donations of everyday Australians.

Red Nose National Scientific Advisory Group Chair Professor Rosemary Horne says Red Nose professionals are the experts in safe sleeping practices and the eLearning program is available in addition to the information sheets and brochures which provide parents and health professionals with the latest scientific evidence for safely sleeping babies.

“It will ensure that every child care educator who completes the program will be able to sleep infants in their care safely, in line with Red Nose’s evidence-based recommendations for reducing the risk of sudden and unexpected death in infancy, including SIDS and fatal sleep accidents,” she says.

Funds raised through Red Nose Day activities go to Red Nose’s advocacy and research programs into the causes of all sudden, unexplained and preventable childhood deaths, educating the community on safe sleeping practices, and supporting families who have been devastated by the sudden and unexpected death of a child.

The organisation’s work in critical research and education programs has seen an 85 per cent decrease in sudden unexpected deaths in infancy (SUDI) in Australia, saving an estimated 9967 lives.

However, there is so much more that needs to be done to reduce these deaths to zero, and Red Nose relies heavily on public support of its official day to continue its important work.

“Trying to beat sudden unexpected infant deaths is an ongoing battle and while it all comes to a head on June 29 with Red Nose Day, it would be absolutely fantastic if people supported Red Nose throughout the year by donating to the cause,” Ms Csortan says.

There are many ways you can get involved on Red Nose Day.

You can buy products including the iconic red noses, car noses, truck noses, adorable plush toy characters as well as pens and wristbands from Big W, Spotlight, CUA or from the organisation’s website.

You can set up your own fundraising page through everydayhero.com.au/event/RedNoseDay2018 or host a Little Rockers Red Nose Disco at your school or sporting club, which comes with access to a special iHeartRadio soundtrack.

Simply raising awareness of the cause on social media will also go a long way. You can use the tags #ninetozero and #rednosedayoz.

By supporting Red Nose Day, you will help fund research into the causes of stillbirth and SUDI, life-saving education with a track record of reducing the risks and bereavement support for the up to 60 people who are impacted by the death of just one child.

• There were 5015 SUDI deaths between 1989 and 2016.
• In that same time period, there has been an 85 per cent decrease in the rate of SUDI deaths.
• This means 9967 lives have been saved since risk reduction campaigns began.
• More than $16.8 million has been invested by Red Nose to date for research.