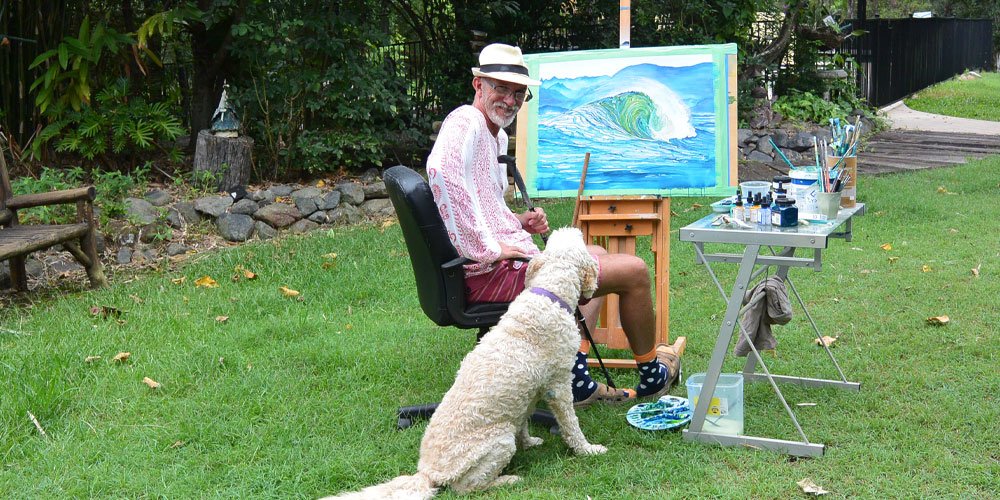 A Moffat Beach man with a love for the ocean is keeping his passion of surfing alive through his artwork, which has been featured on stages around the world with The Beach Boys.

Colin Chandler, affectionately known as ‘Col’ or ‘Colphin’, began surfing 50 years ago, but after being diagnosed with multiple sclerosis (MS) was forced to swap his board for a brush.

“Some years ago I was diagnosed with a version of MS called primary progressive MS. In my case it has resulted in a significant loss of mobility,” he says.

“Despite the limitations caused by the MS, I still have my art.”

Gaining recognition around the world, his biggest claim to fame was when The Beach Boys asked to feature his work as part of their 2016 world tour.

“It was a huge privilege to have my work blown up and featuring as part of the backdrop for The Beach Boys in 167 cities around the world,” he says. “I still feel a buzz every time I think about it.”

Mr Chandler’s love for the sea translates into each painting, which is painted from the perspective of the surfer and is inspired by a Japanese style of art.

“A lot of my work is inspired by the Ukiyo-e genre of Japanese woodblock art made famous by Hokusai. He loved painting waves,” Mr Chandler says.

“While there are many great seascape and beach scene artists, I tend to focus on painting waves from a surfer’s perspective – from inside the barrel looking out.

“I also love capturing massive ocean storms in all their moods.”

Mr Chandler says painting the ocean has become a therapy for living with his condition. “When I am painting the sea, I am still surfing and still in the ocean. I don’t feel like I have MS anymore.

“I still feel connected to the thing I love – the sea.

Unable to surf, Mr Chandler is still able to enjoy a paddle using what he calls the “green turtle technique”.

“I am lucky enough to have a surfing support worker and can still paddle out to sea, but that’s after crawling into the ocean and then I crawl back out again. I call it my green turtle technique.”

After 50 years enjoying the ocean, Mr Chandler is holding his exhibition, Our Ocean, to raise money to protect it into the future.

“All of the profits are being donated to the Australian Marine Conservation Society to help with marine conservation – an area I am passionate about,” Mr Chandler says.

Our Ocean is on now at the House and Garden Art gallery, 81 The Esplanade, Mooloolaba until October 23.

Continue Reading
You may also like...
Related Topics: surfing

Awards a big success
Caloundra no place for a ‘youth jail’