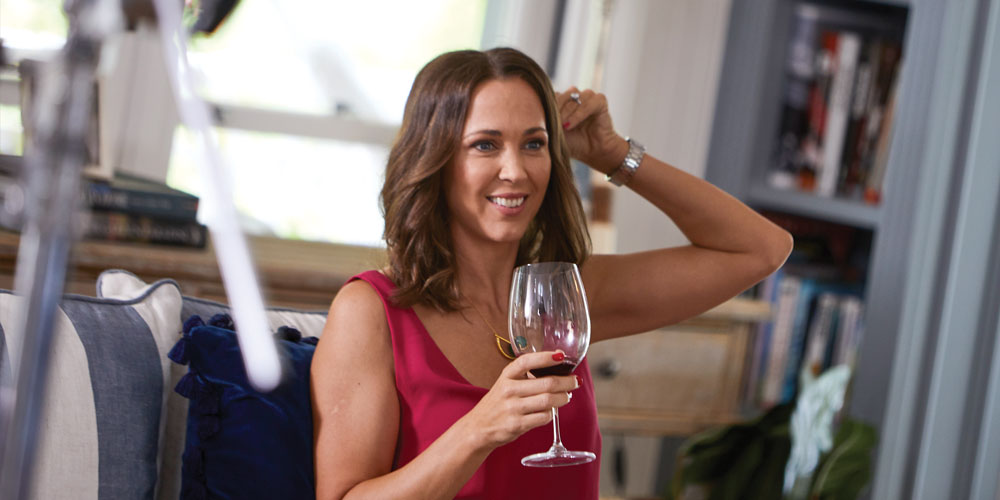 The women’s magazines have been going into hyper drive with speculation over which television series has drawn Bec Hewitt back to the small screen – and their guesses have been wrong!

In an exclusive interview with My Weekly Preview, the actress – who played Hayley Lawson on Home and Away from 1998 to 2005 – reveals it is a Sunshine Cost television series that has inspired her to return to acting.

Ms Hewitt, who is married to former tennis champion Lleyton Hewitt, says being a mother to her three children Mia, 14, Cruz, 11, and Ava, nine, and recently taking on a presenting role on Channel Nine’s travel show Hello World has been well and truly keeping her busy. But when she met Time & Place’s writer and director Tam Sainsbury and read the script for the series, she knew she had found the role she was waiting for.

Speaking to My Weekly Preview while in Buderim to shoot scenes for the yet-to-be-released series, Ms Hewitt says the cast of familiar names – including Heartbreak High star Lara Cox, former Home and Away stars Bree Desborough, Guy Edmonds and Conrad Coleby, Australian Film Institute and Logie Award winner Tracy Mann, and Glitch and Mystery Road actor Aaron McGrath – all were great drawcards for her to sign on for Time & Place.

“Then, when I read the script and connected with Tam, who is a beautiful director, we hit it off and connected straight away. My character, Kylie, is very different to Hayley from Home and Away, so she is a lot of fun to play.

“She has a lot of insecurities and I love having the chance to give daggers across the room; I haven’t had the opportunity to be that person before,” she says.

“I wasn’t searching for anything when this role came up. To me it has to be something worth the time away from my kids. I loved the story and cast instantly and the moment I read the script, I knew this was the right job for me.”

After leaving Home and Away 14 years ago, Ms Hewitt says she experienced a real “pinch-me moment” when she arrived on set to film at Malumba Estate in Buderim.

“I woke up that morning with an extra spring in my step to be on the set of a TV show again, seeing all of the cast and crew buzzing about on the set,” she says.

Ms Hewitt joined a small selection of lead characters to shoot several scenes at Malumba Estate to present to television networks. Ms Sainsbury and the producers will also use the scenes at the Screen Forever conference in Melbourne next week to pitch directly to national, international commercial and streaming networks. She is one of only 10 Australian directors and two Queensland directors selected by the Australian Directors Guild to attend this prestigious conference as part of a directors delegation.

Ms Sainsbury says it is almost surreal to see how Time & Place has evolved since she first started writing the script four years ago. “About 16 months ago, we shot six episodes as a web series here on the Sunshine Coast. I chose the web format because it is obviously much easier to screen something via the web rather than television,” she says.

“Screen Australia came on board as principal production investor and along with Screen Queensland, both funding bodies urged me to look at transforming Time & Place into a TV series. As we originally shot for the web, production values were lower than for television so that producers decided we would reshoot some scenes with higher production values to take to the networks.

“We have had so much support from the film and television advocates as well as the Sunshine Coast Council, Visit Sunshine Coast and the Coast businesses who have come on board. We are aiming to go into production in March next year if everything goes to plan.

“I honestly believe we will have a long-running series on the Sunshine Coast, which will be incredible for job creation, growing the local film and television industry, as well as for tourism. Time & Place could do for the Sunshine Coast what Home and Away has done for Palm Beach.”

The next incarnation of Time & Place has evolved to include six new characters and a slightly altered plotline to accommodate them. Ms Sainsbury says she has also recast some of the original characters and says the cast is now rock-solid.

“One of the drawcards for such a high calibre of talent was the location we will be shooting in – they are all very happy to come to the Sunshine Coast to be able to go to the beach and stay in a beautiful part of Australia while filming,” she says.

“During the weekend shoot, the actors all felt the hospitality of what it will be like to work here for a long period during the series shoot. We had incredible sets, catering from Aimee Provence and DeliFish and accommodation in the gorgeous Aquila Retreat. They definitely felt the Sunshine Coast love.”

Ms Sainsbury and Ms Cox, who plays the lead character of Rebecca Woodruff in Time & Place, first connected more than a decade ago, when Ms Cox starred in a feature film created by Ms Sainsbury that was also filmed on the Coast.

“I like my character, I love the family unit; it’s loving and quirky and fun and she’s a good character to play. There’s a lot of carrying some heavy burdens and a few secrets, but in all, she’s trying to do the right thing. I can’t wait to see how Tam writes future episodes. If I could do this every day, I would be in heaven,” Ms Cox says.

Like Ms Hewitt, Ms Cox is selective of the shows she works on as she is now a busy mother of two. But when she got the call-up from Ms Sainsbury, she was all in.

Heading back home to tennis practice, dance competitions and end-of-year Christmas parties for the children, Ms Hewitt says she is excited to see where the series goes.

“I love a bit of drama and I think the characters in Time & Place are strong. Tam’s created a great script.”

Ms Sainsbury says they are looking for businesses or individuals who may be interested in coming on board as sponsors in exchange for marketing or product placement within the series nationally and internationally.

For more on Time & Place, visit timeandplaceseries.com. Email producers at info@gemininartsandmedia.com to find out more about becoming a sponsor.