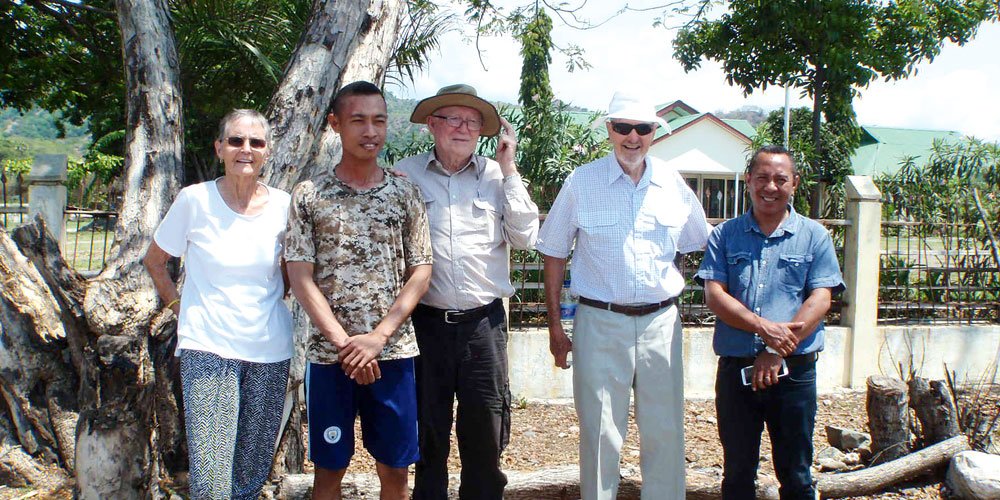 Today, what is now known as Encouragement House, has grown to help hundreds of local students in the Lolotoe district receive an education in the city of Maliana.

Charity founder and Kawana resident Robert Dickson and his wife Elizabeth began the initiative after a chance meeting with Timorese local Deo da Costa in 2006.

Mr Dickson had made a sizeable contribution to a charity, visiting East Timor to see the work they do on the ground.

“The person leading that was Deo; we just had a friendship from there,” Mr Dickson says.

After violence erupted in 2006, the Dicksons invited Mr da Costa to live with them and take a three-month English course at the University of the Sunshine Coast.

When they asked what he was going to do once he returned home, his idea came to fruition.

“Deo’s dream was to provide a safe place in Maliana where children from his remote village could come to continue their secondary school studies,” Mr Dickson says. “At that time only some of the seven villages in the Lolotoe sub-district had a primary school and the nearest high school was an overnight walk away in Maliana.

“[Mr da Costa’s] experience as a young man had been to live, unsupervised in Maliana, caring for himself, while he completed his high school years.

“In consultation with the local people, it was decided that hostel accommodation for village boys and girls equally be provided close to the high school.”

Thanks to the generosity of the Sunshine Coast community, the Dicksons were able to raise $600,000 to build the facility, initially for 160 students each school year.

“Some of our previous students now include a radiographer, nurse, teachers, soldiers, scientists, policemen, drivers, farmers, IT specialists and, of course, students who have returned to their village but with knowledge to help with their family farm.”

Encouragement House is run by the da Costa family and now accommodates students from all six sub-districts, which include several language groups.

The organisation also teaches English and computer skills after school hours and has accommodated many Australia high school students on immersion visits over the years.

In 2021, Encouragement House is hoping to fundraise for urgent renovation on the building, caused by the harsh climate over the years.

“Our major thrust this year after all the students commence school again in early January 21, will be to continue our building maintenance program to ensure the buildings in the tropical weather keep going,” Mr Dickson says.

Research for a better world
New year new you