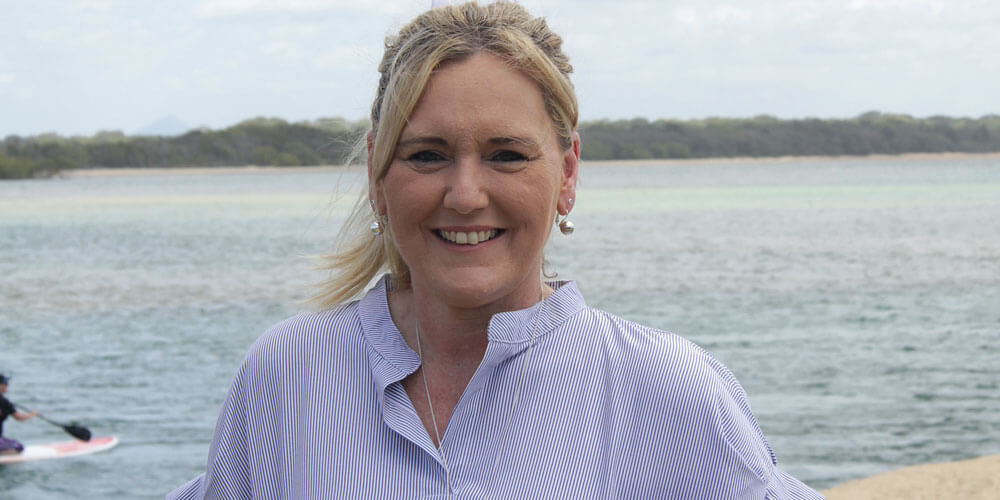 Leanne Weyer never imagined that a small mole on her shoulder would lead to her writing cards and creating memory boxes for her two children and husband Peter to cherish after she is gone.

The 47-year-old Kawana resident was diagnosed with stage-three melanoma in 2015 after the mole was removed with a large excision made to also remove cancer lurking beneath the surface.

It was merely months later that the cancer was found to have spread to her lymph nodes, with 13 lymph nodes found to contain melanoma, along with two large tumours. All of these were removed.

“After the operation… it was extremely painful, like ants running under your skin and I couldn’t raise my arms above my head – this is my new normal,” Ms Weyer says.

She was told it wasn’t a matter of if, but when the cancer would come back and in November 2017 she was told it had returned and she had 12 to 18 months to live.

Cancer had spread to Ms Weyer’s pancreas and there was a shadow on her liver. From here, she was facing palliative care to manage pain and end-of-life options.

“When we got the news that it was terminal, we were all just so devastated,” she says. “My new motto is ‘making memories’. Since the diagnosis, we do a lot more together. Family time isn’t taken for granted.”

Ms Weyer has purchased gifts and written cards for every important occasion for her family’s future and is putting them into special boxes for her loved ones.

Her story is shocking, but one that is all too common in Queensland, which has the highest rate of melanoma in the world.

A tiny spot on our skin can be hiding a deadly secret beneath and melanoma is one of the most aggressive forms of cancer of all types.

Coast entrepreneur Raphael McGowan, founder of sunscreen applicator bakslap, is determined to see the number of people affected by the deadly cancer reduce over time.

A long-time supporter of Melanoma Institute Australia (MIA), Mr McGowan is bringing the Melanoma March to the Sunshine Coast for the first time, with the inaugural event kicking off on March 31.

Mr McGowan lost his sister Tess to melanoma at the age of 31 in 2012, just months after she had her first child. Since then has worked tirelessly to create bakslap to help with sun protection and has raised more than $80,000 for cancer research.

“I don’t want any families to go through what Leanne’s is and mine did,” he says.

“Last year over 7000 people from every state and territory took part in a Melanoma March, so we’re excited to bring the event to our region for the first time to inspire others, remember loved ones and get behind the cause locally.”

Ms Weyer, her husband Peter and children Emily, 21, and Joseph, 18, will participate in the event with a crew of more than 50 wearing ‘Melanoma Mumma’ T-shirts.

Mr McGowan participated in his first Melanoma March is 2012 in Sydney and has marched each year until he came back to the Sunshine Coast in 2017.

“It’s at events like this that strangers become friends and it means a hell of a lot to people when they know they have the support of the local community,” he says.

“Personally, I have seen sun safety awareness improve over the last few years, but we certainly require constant education and innovative ways to reach the 20- to 39-year-olds who are most at risk.

“I have been getting messages from people who have been prompted to get their first skin check and have even had to have early-stage melanoma removed. Hearing stories like this really brings me back to the core purpose of bakslap and gives me a lot of satisfaction that we are preventing others from experiencing the pain and loss our family went through.”

MIA CEO Matthew Browne says more than 14,000 Australians are diagnosed with melanoma and one person dies every five hours from the disease.

“We are working towards melanoma becoming a chronic disease instead of a terminal illness, but until we achieve our mission of zero deaths from melanoma, we still have a lot of work to do,” he says.

“We owe that to those who have lost their lives to melanoma, and their families and friends whose lives have been forever changed.

“Melanoma March is an opportunity to raise vital funds to change the treatment landscape of melanoma, not just in Australia but across the globe.”

The Melanoma March is open to people of all ages and abilities and will see participants walk from the Alex Surf Club to Mooloolaba and back again on March 31.  The event opens at 2.30pm with live entertainment, activities, stalls and raffle prizes before the march sets off at 4pm.

It’s not too late to get a team together and encourage friends and family to donate to support life-saving research.

For more information, to register to walk, or sponsor someone who is walking, visit melanomamarch.org.au.

Continue Reading
You may also like...
Related Topics: Charity, Health