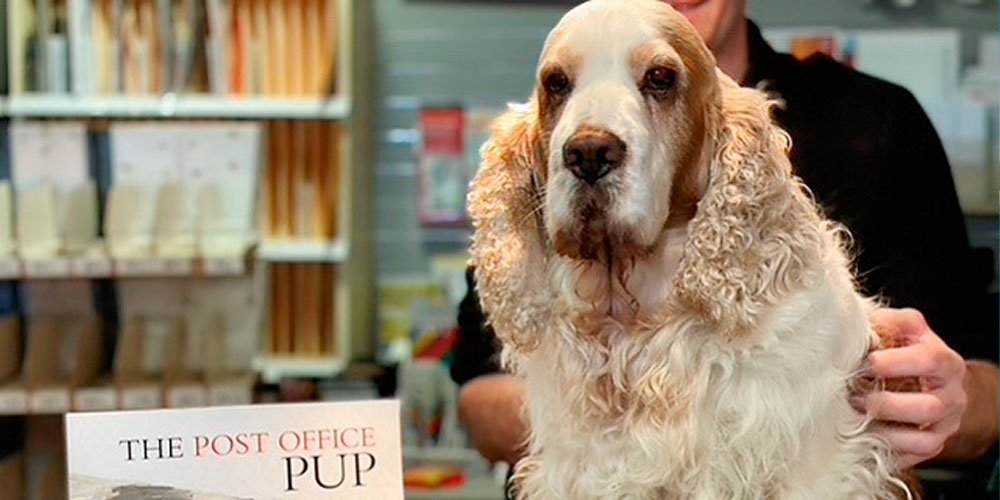 A new children’s picture book is celebrating the story of a Mapleton family and their shy “post office pup”.

The Dowdle family has owned the post office since 2008, and their cocker spaniel Shilo, who sits snuggled behind the counter watching the world go by, has become the inspiration for local author Marg Gibbs’ latest story, The Post Office Pup.

Mrs Dowdle has five children, and her youngest Xanthia was born just two weeks after the family took over 13 years ago.

“I knew the family when their five children came to my kid’s book club after school to read and share stories,” Mrs Gibbs says.

“Because I am a Mapleton resident and avid letter writer, I visit the post office frequently to do my banking, send parcels and write letters to my grandchildren.

“Delivering, redirecting, banking, loading trucks and so on, the jobs are many for this super-busy family.

“Rather than Shilo being well known around the community, he is almost the opposite,” Mrs Gibbs adds.

“Hidden, secretive and asleep in his cosy blanket near David behind the counter, he is a beloved pet.

“I approached Yvonne and her mum Elizabeth to write a story about Shilo. They loved the idea.”

Mrs Gibbs, a former secondary teacher, spent time at the family home learning about 11-year-old Shilo and watching him energetically run around the backyard chasing bugs and insects.

“He has his sleeping routine and watches everything from behind the counter in the post office, then he loves running around the vegetable garden at home and catching bugs.”

With playful illustrations by Western Australia’s Alicia Rogerson, the book follows Shilo as he smells the mail daily, waiting for what surprise will arrive.

“Every day Shilo waits patiently for a surprise to arrive, the mail van comes and Shilo sniffs around waiting for something for him, but nothing comes to him.”

Mrs Gibbs, who has lived in Mapleton for 10 years, began writing seriously after her own children were born. She has seven children’s and one adult novel to her name.

“My happy place is putting a story on a page,” she says.

“Writing the story for children about a local village like Mapleton brings more social connection and conversation.

“It’s amazing how many dogs come for walks and stop with their owners to chat at the post office. They come in on leads, in strollers and in arms. Dogs and pets enable intimacy, companionship and questions.”

Continue Reading
You may also like...
Related Topics: dog, Family