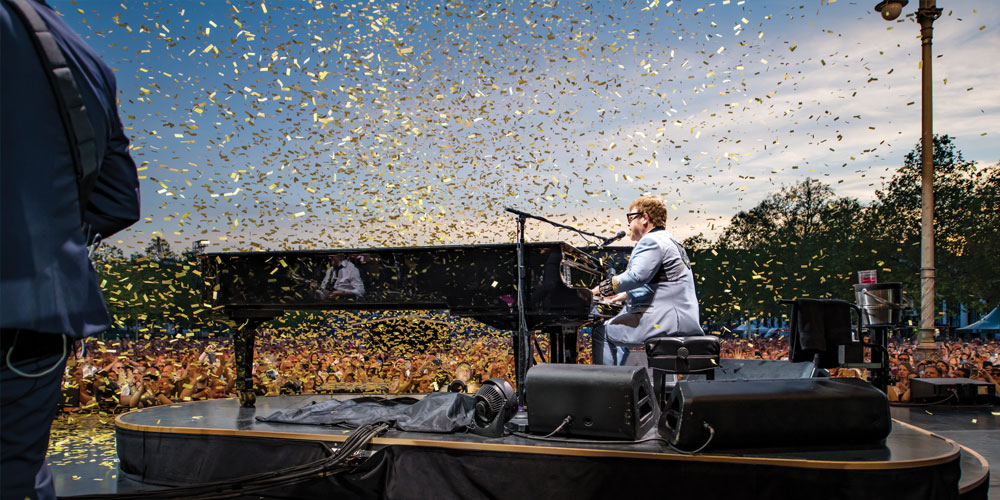 From sublime football to ridiculous obstacle challenges, Sunshine Coast Stadium has seen plenty of action over the past decade as our region’s premier venue for outdoor events.

A whole new ball game awaits on March 3 next year however, when the stadium hosts Sir Elton John – one of the highest profile guests on the planet.

The British singer, pianist and composer is one of the most revered and celebrated music icons of the 20th century with 38 gold records, 31 platinum and multi-platinum albums, over 50 Top 40 hits and more than 300 million records sold worldwide.

So he’s a big deal and securing Sir Elton for this gig is no small feat.

The council-supported event is expected to attract a sell-out crowd of 20,000, making it one of the biggest events on the Australian leg of the legendary singer’s swansong tour.

“We have been in discussions for quite some time with Chugg Entertainment about hosting Sir Elton John in a concert on the Sunshine Coast,” Cr Dwyer says.

“The stumbling block in the past was the fact we didn’t have the right infrastructure with the right capacity to host this type of event.

“Over this period, we’ve worked extremely hard to build a relationship with promoters and we’ve had numerous site visits at Sunshine Coast Stadium with representatives from Chugg Entertainment and Sir Elton’s production team.

“Conversations have progressed over the past nine months and with Sunshine Coast Stadium now up to standard, our time has come.

“It’s extremely exciting and a huge thrill that the executive producer has put faith in our region to support such an iconic event – Sir Elton’s last ever show in Queensland and his second last performance in Australia.”

Sunshine Coast Stadium will undergo a major transformation in the final week of February 2020, when Sir Elton John’s enormous production entourage arrives to install the opulent, Baroque style 46-tonne, 90-square-foot stage and prepare the arena for the expected crowd.

“The logistical considerations involved with this event are enormous. From transport and traffic planning, to how and where we store and have access to the 32 semi trailers that will arrive for production,” Cr Dwyer says.

“We had to prove to the promoter that we can deliver in all of these aspects and ensure that Sir Elton’s experience and the promoter’s experience before, during and after the event will be a positive one.

“This also applies to the fans – we will be pulling out all stops to make sure their concert experience is one they’ll love and never forget.

“We want to attract many more amazing live touring acts to come our region and perform at Sunshine Coast Stadium.”

And as for Sir Elton John himself?

“His movements to and from the Sunshine Coast and the stadium on the night will remain under wraps, but from what we’ve been told there will be private jets and helicopters involved.”

What else would you expect from a ‘rocket man’?

WHAT YOU NEED TO KNOW

Farewell Yellow Brick Road – The Final Tour will be staged at Sunshine Coast Stadium on March 3, 2020. Tickets for the concert will go on sale to the general public at ticketek.com.au from midday on Tuesday, June 25. 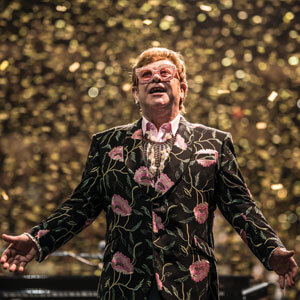 In his Farewell Yellow Brick Road tour, the songs from Elton John’s legendary 50-year career will be showcased against a backdrop of never-before-seen images and videos, brand new stage production, along with a tour wardrobe designed by Italian fashion house Gucci.

He will be joined by longstanding band members Nigel Olsson on drums (who was part of Elton’s original three-piece band in 1970), esteemed musical director Davey Johnstone (who first recorded with Elton in 1971 and joined the band a year later) on guitar, virtuoso Ray Cooper on percussion, Matt Bissonette on bass, John Mahon on percussion, and Kim Bullard on keyboards. 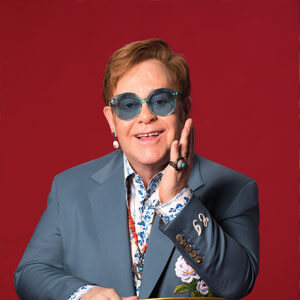 Reginald Kenneth Dwight was an unassuming and shy boy who grew up in London. He had one dream – to become a pop star.

It was at the tender age of three that his talent was revealed as he sat at a piano and astonished his family with a rendition of The Skater’s Waltz. By the age of 23, he was on his first tour of America – tight silver hotpants, bare legs and a sequined shirt making a statement.

Sir Elton John is now known as one of the most successful solo artists of all time with more than 300 million records sold worldwide and the biggest selling single of all time – Candle in the Wind 1997 – under his belt. With more than 4000 performances to his credit, Sir Elton John has brought joy to generations of music lovers.

“I’m not prone to being a nostalgic person,’’ he says while promoting his forthcoming biography, Me.

“I’m often accused of only looking forward to my next gig or creative project. It’s come as quite a surprise how cathartic I am finding the process of writing my memoirs. As I look back, I realise what a crazy life I have had the extreme privilege of living.”