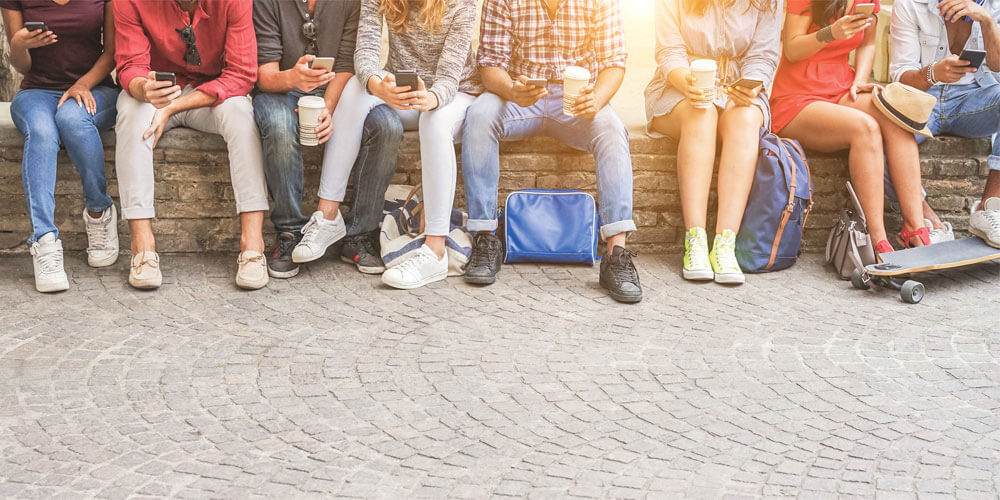 But for the past 10 days, I have been social media free and it feels great. But my decision didn’t come without hesitation. What would I miss? How would I communicate? Could I actually do it?

There were a couple of factors that contributed to my decision – one being a disturbing article I read about the affect social media is having on our memories.

Secondly, I was becoming aware of an incessant pull towards my phone. Checking social media is the last thing I do at night and it is the first thing I do in the morning. I came to realise I had a serious case of FOMO (fear of missing out) and it was starting to impact my day-to-day life.

So, what did I discover? For one, more time. I have been more productive and motivated around the house. I also have a renewed interest in the tasks that I love – reading, cooking and interior design.

Although communication opened up at home, it declined in other areas. I’ve become accustomed to ‘chatting’ with my closest friends and family through social media and all of a sudden these channels were closed.

“When social media is used in moderation to keep in touch with family and friends it may be okay,” says leading University of the Sunshine Coast senior lecturer in psychology Dr Rachael Sharman.

“However, there is an increasing body of research demonstrating that people are neglecting real friends and relationships in favour of excessive social media use, which appears to be quite detrimental to their mental health.”

Technological advancements have changed the way we share and interact.

A decade ago, Facebook had 145 million users worldwide. Today there are more than 2.20 billion monthly active users.

The Digital in 2018 in Oceania report by We Are Social and Hootsuite, reveals 69 per cent – or 17 million – Australians are active social media users, a number that has grown six per cent in 12 months.

We spend five and a half hours a day accessing the internet, which includes one hour and 39 minutes using social media.

So, are we addicted?

Dr Lynette Maguire believes so. The social commentator, who studied narcissism for her doctorate at the University of the Sunshine Coast and has majored in psychology, says we have a problem.

The evidence backs up her claim, with researchers and psychologists now investigating whether this form of addiction can be classed as a mental disorder.

In 2017, scientists developed a psychological behavioural scale for ‘selfitis’ – the obsession with taking selfies, and earlier this year the World Health Organisation revealed that video gaming addiction is now a mental health condition. So, who’s to say social media won’t be next?

Psychologists at Nottingham Trent University, a global leader in addiction research, this month revealed their findings into the study of addiction and social networking sites. The study investigated UK participants’ personalities and their social media use. The team deemed five per cent of participants as being at high risk.

Official condition or not, there is no denying that social media – and smartphone use in general – triggers our dopamine levels.

Even the founding president of Facebook, Sean Parker, recently weighed in on the issue.

“[He] recently admitted that triggering the neurotransmitter dopamine, was very much part of their tactic to get us to consume as much of our time and conscious attention as possible,’’ Dr Maguire says.

“Every time we get a like, share or a message, we get a little dopamine hit which is why we spend more time on social media – checking our phones at the checkouts or waiting for a bus. Dopamine is linked to addictive behaviour and these platforms are designed to target this human vulnerability.

“The tech designers understand what triggers dopamine surges, and they work toward creating products that are laced with hijacking techniques which in turn lure us in, creating compulsion loops.

“They know that the strongest way to reinforce behaviour is by a random schedule, so that’s why we compulsively check our phone wanting a little dopamine hug – whether it be by a like, share, digital confetti shower, or a friend’s post.”

“Even receiving text messages and likes typically operates on an intermittent reinforcement schedule, which is exactly the same method used by pokie manufacturers. Also in the case of social media, you are invoking anticipatory dopamine, which is stronger than the dopamine produced by the actual experience.

“It’s interesting that a number of Facebook executives and Silicon Valley experts actually ban their children from social media. They clearly know something we don’t… yet. I think it’s fair to put in sensible limits around social media use and to ensure you as a parent model that behaviour.”

But what example are parents setting?

“Last year I sat in a cafe in Noosa when a couple arrived with their toddler son,’’ Dr Sharman recalls.

“They ordered breakfast and then both mum and dad sat scrolling through their smartphones and handed an iPad to the toddler, who was able to use it with a surprising level of skill. The entire time I was there, no one in that family even looked at each other, let alone used any kind of old-fashioned verbal communication.

“I think that says it all and you can pretty much guarantee that child will develop impaired social skills.

“Some research conducted last year by my Honours student, Tharen Kander, demonstrated that higher use of social media in a young cohort was related to impaired ability to correctly read emotions, form high quality in-real-life friendships, which led to higher levels of depression.”

In January, Facebook CEO Mark Zuckerberg shared a post in which he said the company’s focus for 2018 was to make sure the time spent on Facebook was well spent.

“We feel a responsibility to make sure our services aren’t just fun to use, but also good for people’s wellbeing,” he wrote. “Based on this, we’re making a major change to how we build Facebook. I’m changing the goal I give our product teams from focusing on helping you find relevant content, to helping you have more meaningful social interactions.”

Both Dr Sharman and Dr Maguire agree social media inhibits people from living mindfully and impacts on our memories.

In a study published in the Journal of Experimental Social Psychology in May this year, researchers demonstrated how those who share their experiences on social media have limited memories.

“Across three studies, participants without [social] media consistently remembered their experience more precisely than participants who used media. There is no conclusive evidence that media use impacted subjective measures of experience. Together, these findings suggest that using media may prevent people from remembering the very events they are attempting to preserve,” the report concludes.

“There’s an increasing body of research that suggests social media is interfering with our memory,’’ Dr Sharman explains.

“The mechanism is probably two-fold, if your attention is shared and unfocussed by trying to concentrate on your Facebook feed and dinner conversation at the same time, you won’t process a strong memory of what was said over dinner. Secondly, there has been research to suggest that if you take a photo, you unconsciously spend less effort attempting to memorise the scene.

“You cannot be plugged into your environment, conversations with so-called significant others, if you are constantly distracted by communications elsewhere.”

Dr Maguire says social media creates a hyperreality, a copy of the real, which hijacks our lives and our perceptions.

“We then need to spend time endorsing our hyperreal profiles by posting selfies with cocktails, or on the beach,” she says. “Have you noticed no one posts selfies of them doing the vacuuming?  Research shows the more time we spend on social media, the more likely we are to have depression or anxiety. For example, we’re doing the vacuuming and when we stop for our dopamine hit, we see someone’s beach cocktail post, and we deem our lives not as fabulous. It’s a nasty cycle that detracts us from being present and enjoying life.

“I was heartened to hear of a digital app maker called Dopamine Labs who run ethics tests on apps they are asked to build, with questions such as: ‘does this app encourage human flourishing?’  With technology changing so fast, we can only hope that the designers of these programs start considering the end result for humanity, rather than financial gain.”

Wanting to reduce your time spent on social media? Follow these suggestions:
Find a healthy activity as an alternative to screen time, that sets off the same dopamine release, ie. a fun family activity
Introduce this rule: an hour of screen time equals an hour of outside time
Remove technology from bedrooms
Change the wifi password every day – when chores are done, give the children the password
Have tech free days, weekends or weeks.