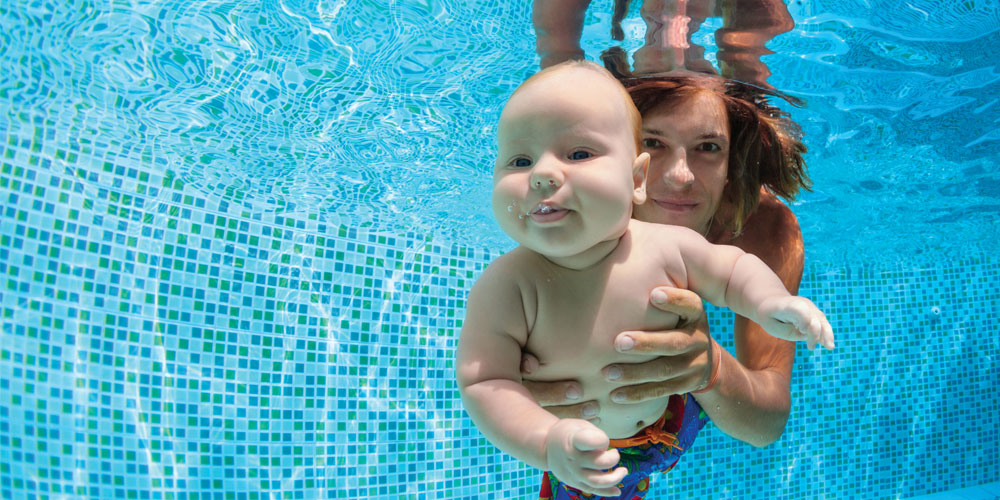 The Sunshine Coast is a water wonderland. Not only do we have great beaches, but we also have beautiful swimming holes, creeks and waterfalls. Thousands of homes also have backyard pools and despite years of public education, kids are still drowning in them. A pool gate is left open when it shouldn’t be or an Esky is left leaning up against a pool fence to dry out, a child uses it to scale the fence and it’s an accident waiting to happen.

On average, 10 children under the age of five drown in Queensland every year and 67 per cent of children who drown are aged four and under (Queensland Family and Child Commission). According to the Royal Life Saving National Drowning Report 2015, of the drowning deaths of children under five, more than half occurred in swimming pools.

Swimming coach Laurie Lawrence has been preaching swim safety for two decades. In 2000 he launched the Kids Alive – Do the Five program nationally, but he’s worried the message still isn’t getting across.

Mr Lawrence says the government isn’t investing enough money in school-based swimming lessons – a necessity because not everyone can afford private lessons – and  parents need to take more responsibility with kids around water, especially when alcohol is involved. “Alcohol is part of life and if you’re having a party and you have young children at that party, there’s a responsibility if there’s a pool to look after the child.”

He says recent research of drowning deaths of children under five across Australia show supervision was completely absent in 64 per cent of cases, with a further six per cent of children left to be supervised by siblings or other children.

To Kristy Perkins, manager of Caloundra’s John Wallace Swim School, the statistics have faces and names. She tells one story about two young local children, a four-year-old boy and his 16-month-old brother, finding their way into the family pool recently when the parents weren’t around.

“The older brother found a way to open the gate,” she says. “He had togs on but the younger boy didn’t. From his lessons, the older brother was aware you can’t go swimming unless you have togs on. It was a natural reaction on his part to make sure the younger brother didn’t go in. The parents were outside and got there really quickly, but it’s things like that where we educate the kids from an early age. It’s so important.

“Learn-to-swim classes are forever evolving and they’re evolving for good reasons,” she says. “We feel we are bringing things back to a younger age. There was a time when in Australia we waited until a child developed too far before teaching them to swim. The earlier you can introduce these basic survival skills, the better.”

She knows how quickly a family barbecue by the pool can turn into a tragedy. “A child drowning is the quietest accident waiting to happen,” she says. “No one will hear if a child goes under and there’s no eyes on them. It doesn’t take much for a child to drink water the wrong way or lose their grip and then they can’t get to the surface.

“Assigning a designated watcher doesn’t mean it has to be for the whole day,” she adds. “They can just put on a bright hat so we know who the designated person is and always make sure there is at least one designated supervisor at all times. It’s so easy to think, my husband will be watching the kids so I can talk to my friends. It’s really important in a party situation to designate someone and then you can change it around.

“Supervision is one of my main safety lessons, especially in a situation with a barbecue around the pool. The other thing is, when you’re drying the Esky out, don’t leave it against the fence overnight. Children can go wandering, they want to look into things, they’re discovering new things. We want to make sure the entire pool area is clean.”

Mr Lawrence and Mrs Perkins both believe children should be taught water safety from birth, as a daily routine parents can do at home. “They come from the womb so it’s a water environment,” says Mr Lawrence. “Maintain that natural affinity they have with the water by trickling water over their face.

“Education starts from when the baby is born,” says Mrs Perkins. “I go to the community health clinic and talk to brand-new parents about how to introduce their babies to the water. We run free lessons for babies from eight weeks old to six months old because we want to teach the parents how to teach their child a queue. Every submersion or water on the back of the head comes after a personalised queue. For a child whose name is Sophie, we will say, ‘Sophie, eyes in’. That’s how we work on getting them to shut down and submerge in a safe manner.”

“The first thing you should do is make sure all the teachers are qualified,” says Mr Lawrence. “A good learn-to-swim school should have clean, warm water. You should inspect the place to see the kids are happy, there’s no intimidation, fear or force. None of that. That’s paramount. Kids have got to learn to love water. It’s got to be a fun process.”

His daughter recently had twins, and Mr Lawrence, who lives on the Gold Coast, is looking forward to teaching them to swim. It’s not every day kids are taught to swim by the man who coached a host of Aussie swimmers to Olympic and world championship success.

“I taught my own kids to swim as babies,” he says. “By 18 months they could swim anywhere in the pool. I’ll do the same with these twins. It will be done in a fun way. When they’re ready I’ll drop them into the water and have them swim back to the side, but not on the first day. The learning has to be appropriate to their positive growth and development. Those children who have lessons early, it builds their social, emotional, physical and intellectual capital. They’re smarter, better co-ordinated, safer and healthier than other children.

“It’s all about educating the parents,” Mr Lawrence says. “A good teacher will explain how to hold your baby in the pool. You’re an idiot if you put it under the first time you come to the pool. The baby is physically and cognitively not capable of doing certain things. What they can do is learn to hold their breath on command and as a result, can learn to float on the water. Then they are capable of sitting on a mat and self-submerging. They can learn to go underwater by themselves, but they’ve got to be supervised all the time.

“A 12-month-old child is able to do different skills to an eight-month old child. A two-year-old child is able to do a lot more than a one-year-old. The teachers need to be well-versed in children’s physical and cognitive growth. I recommend parents stay in the water with the child until the child turns four years of age. Why? Because a good teacher will instruct the parents what to do with their child, how to teach them. Then the children know they can’t go swimming without Mum and Dad.

“Plus, the child has a half-hour lesson. If someone puts five three-year-olds in a class together to teach, those children need manipulation, to be shown what to do because they don’t have the fine motor skills. So effectively that child is going to have a five-minute swimming lesson if they’re by themselves in the pool with other kids and one teacher.”

Mr Lawrence also says children should learn to swim with and without goggles.

“They should be taught without goggles first so if they fall in the water they don’t freak out,” he says. “Once they start to get their face underwater swimming for 15 or 20 minutes, if their eyes are starting to get sore, use goggles.”

Different swim schools have different teaching techniques, and most schools offer good-quality programs, but some don’t and take advantage of parents by charging for substandard service. Parents looking for a good school need to do their research.

“Get to know the swim school,” says Mrs Perkins. “Learn a bit about their background and philosophy in terms of learning to swim. Don’t be afraid to ask questions. Have a look and make sure it feels right for you. First impressions are important and you need to listen to your gut. You’ll know as a parent if it’s the right school for you.”

Laurie Lawrence will be speaking at the AUSTSWIM Soak It Up 19 World Conference, to be held at the Novotel Twin Waters on October 3 to 4.

10 children under the age of five drown in Queensland each year.

67 per cent of children who drown are aged four and under.

In 64 per cent of drowning cases in children under five, supervision was completely absent.

Laurie Lawrence launched Kids Alive – Do the Five in 2000. The five steps: fence the pool, shut the gate, teach your kids to swim, watch your mate and learn how to resuscitate.

Adult supervision is a must around water.

The first steps of learning water safety encourages parents to use verbal triggers for children from two months
of age: say the child’s name, then “ready go” and pour a cup of water over the baby’s face. Generally by four months of age, they learn to hold their breath on verbal triggers. 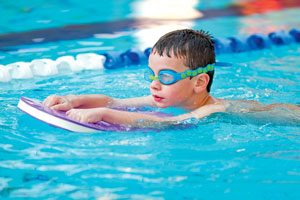 Should swimming be taught in schools?

From 2019, all Queensland state schools with primary students are required to have a water safety or learn-to-swim program. Participation in these programs by students is not compulsory and parents can choose for their child not to participate. Mr Lawrence has been an outspoken critic of the program: “It’s nowhere near enough,” he says. “The only state that does the learn-to-swim at schools properly is Tasmania. They give 10 lessons every year.

It doesn’t guarantee a child will learn to swim because you can’t do it in 10 lessons, but you can have them floating and playing in the water, but not deep water. It doesn’t make them safe.

“Learn-to-swim is a long, slow process if you want to do it properly. The current government says they’re having water safety lessons but that’s a furphy because it could be drawing a beach scene with red and yellow flags and that’s water safety. In my opinion, kids should have the opportunity to learn to swim at school.

“Despite the spin the government wants to put on it, they’re not being taught to swim at school. Parents need to go out of the school. Unless the school has a pool or unless the principal is committed to having swimming lessons for the kids, the kids don’t get it. The principal has to organise buses, take the kids to a pool and the bus often costs more than entrance to the pool. We’re getting the short shaft.”