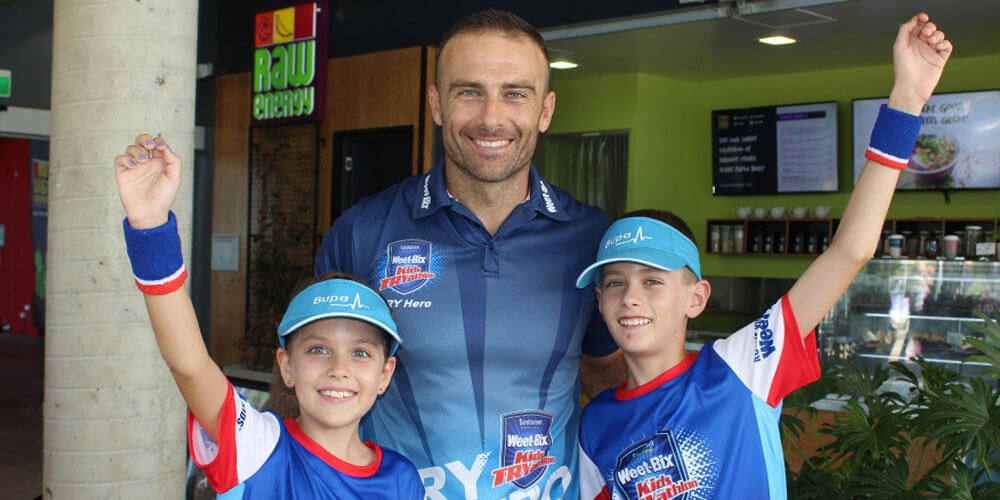 Sanitarium Weet-Bix Kids TRYathlon ambassador Steve ‘Commando’ Willis made a special visit to the University of the Sunshine Coast earlier this week to encourage participation in the TRYathlon that will be held at USC on April 22.

Mr Willis engaged with a dozen local children who will take part in the annual swim-cycle-run event, that for the first time, will be held on the campus.

The TV celebrity provided the children with tips on how to prepare for a TRYathlon, including physical, mental and nutritional aspects, and then put them through their paces with a series of simple exercises.

Mr Willis answered questions about training, including one about running that saw the children challenge the Commando to a 400 metre run around the athletics track.

“They were well and truly spent,” Mr Willis tells My Weekly Preview.

“The TRYathlon is an important event for children and their parents to get out of their comfort zone and to try something new.

“My daughter Ella got so involved in them this year, she did the one in Sydney in February, which was attended by thousands of kids, it was almost like one of those professional triathlons but without the stress and competitiveness.

“She wanted so badly to do another one that we drove an hour to the next one in the norther beaches and she entered there as well.

“She would travel around the country doing them all if we let her.”

At the TRYathlon, children will take part in small groups according to age and gender.

Online registrations are open until April 15, but children can register manually on the day.

Can the Lightning strike twice?
Big steps towards autism progress