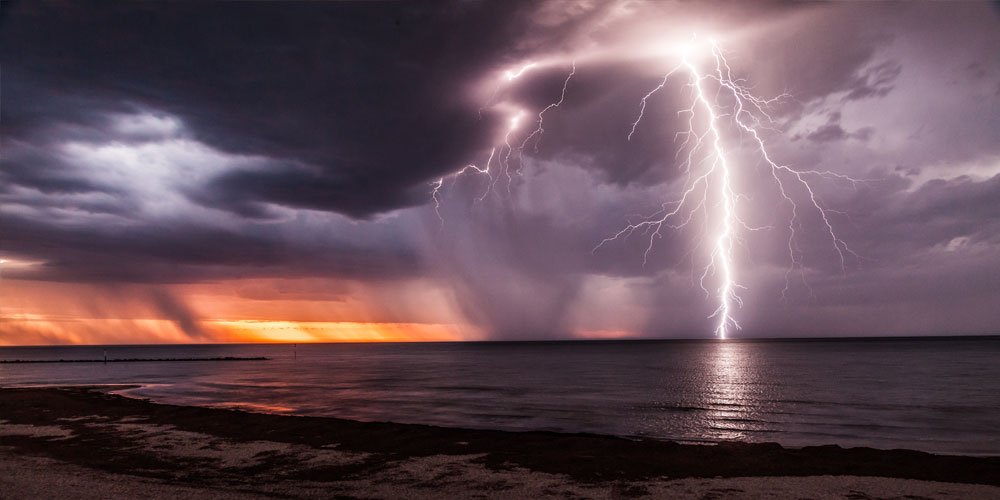 This storm season will be the most ferocious and persistent in recent memory, the nation’s most respected long-range forecaster has warned.

Hayden Walker, a fourth-generation forecaster and son of world-famous weather expert Lennox Walker, has prepared an exclusive spring and summer preview – and he is not pulling any punches.

Mr Walker’s latest analysis follows his expert guide to summer published on sunshinecoastnews.com.au on December 3 last year and cyclone forecast on January 27. Both proved highly accurate. He says this storm season will be the most violent and sustained in several years and residents need to prepare for it.

Mr Walker predicts dangerous storms, accompanied by hail and localised flooding, will arrive earlier than usual, during the final week of September.

“Extreme weather conditions during the winter period have been predominately confined to the southern parts of Australia, with minimal activity in Queensland and in the north. However, this is all about to change,” he says.

“The outlook for spring will accommodate heavy and savage storm activity in southeast Queensland, commencing in September, particularly the last week of the month. But it won’t just be the spring months bearing the brunt of these weather extremes.

“All three months of summer will see storm activity well above the average, compared to previous years.

“Not only will there be hail, gale-force winds and associated flooding, these weather extremes will affect infrastructure, emergency services, property owners and the economy due to a loss of produce.”

He says in October and November the intensity of storm activity will increase in southern Queensland, with Mother Nature releasing her fury. He says there will also be an increased frequency of storms compared with previous years.

“Storm activity for this period will not only be confined to the coastal and adjacent inland areas, but more widespread throughout the state.”

Mr Walker, the Bundaberg-based research director and principal of Walker’s Weather, has a strong association with the Sunshine Coast as his family previously called Crohamhurst Observatory at Peachester home.

He and his research team are engaged by insurance organisations, farmers and construction and mining companies to predict extreme weather events that can make or break industries.

Mr Walker predicts the main areas affected will be in the Gulf of Carpentaria and Western Australia.

“There will be two cyclones in the Gulf, one in January and one in February,” he says.

“I have one forming off the north Queensland coast in February, with a low probability of crossing the coast, and most probably heading east to the South Pacific islands.

“There will be another affecting the Northern Territory in April and three cyclones in WA – two in January and one in February.’

“Cyclone activity will be prominent in the South Pacific islands.”

Mr Walker says the end of September and October will bring decent falls to a number of areas throughout the state with further rainfall indicated during November and December (some areas to a lesser extent).

“The start of 2022 will see heavy rain across the top end of Australia and this will be repeated during February. Rainfall is also indicated at a number of inland areas,” he says.

Mr Walker uses his knowledge of the sun, combined with patterns of sunspot activity and energy flow, to predict both the short- and long-term future of weather worldwide, specialising in long-range forecasts.

The sun has an ever-changing surface that accommodates large sunspots emitting solar radiation or magnetic fields, which react with the Earth’s magnetic field. This causes a reaction with the poles, thus producing the Northern Lights.

An increase in sunspot activity, especially during a solar maximum, gives rise to weather extremes, such as flooding, cyclones and storms. The reverse happens during a solar minimum, or a dormant period, when we experience droughts.

Mr Walker has been successful in predicting many major weather events – such as the cyclones Larry, Yasi, Marcia and Olwyn, flooding to the New South Wales coast during April 2015 and recent storm activity in Queensland and New South Wales.

He was the only long-range weather forecaster to predict Cyclone Oswald that brought heavy rains to New South Wales and Queensland, especially the floods to Bundaberg.

Prepare your home for a storm

Have you got a Pet emergency plan?

The Pet Emergency Plan is for your household pets. If you have more than two pets, or are looking after your neighbours’ pets, complete a second plan.

For information on how to prepare for storm season go to getready.qld.gov.au

Continue Reading
You may also like...
Related Topics: Storm