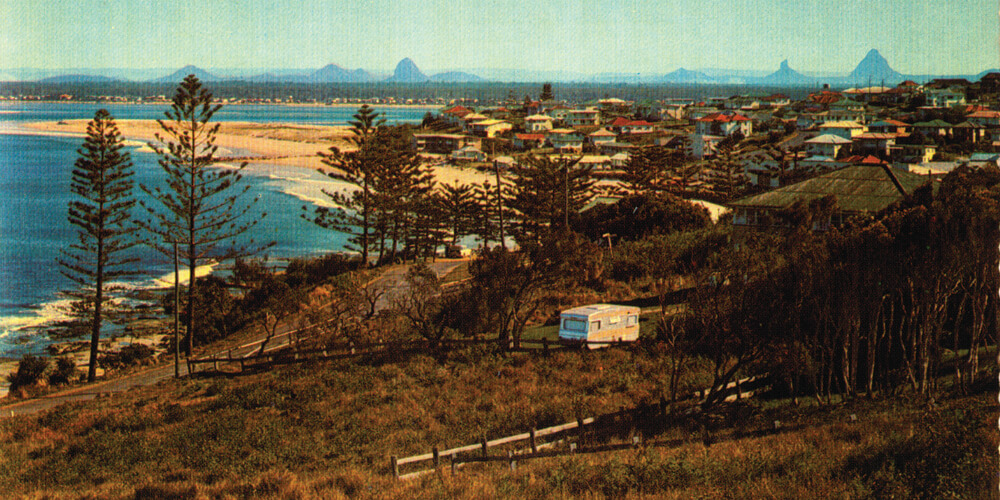 1967 – The birth
The birth announcement appeared in the Government Gazette of August 1, 1967, after a long gestation.

The name had first come up almost a decade earlier at the inaugural dinner of the Sunshine Coast branch of the Real Estate Institute of Queensland in Caloundra in December 1958. The move was likely prompted because a similar distance from Brisbane to the south, the South Coast had rebranded itself the Gold Coast a few months earlier in October 1958. Sibling rivalry was present from the beginning.

The three local authorities – Landsborough, Maroochy and Noosa shires – were collectively the Near North Coast or just the North Coast. A name was needed to bring them together for tourism and identity in the southern market. A few precious resources were considered – Silver Coast, Diamond Coast – and as Suncoast had already been taken by a developer, finally it was settled. It would be named the Sunshine Coast.

The three local councils endorsed the name in November 1966, and in July 1967 a Notification of Decision to Adopt a Place Name under the Queensland Place Names Act of 1958 appeared in the Queensland Government Gazette. Minister for Lands, Alan Fletcher, advised that the decision would take effect from August 1, 1967.

1968-1970 – The toddler learns to walk
It was time for timber and primary production on which the region had been founded to make way for tourism, the industry of the future.

Until this time, the beaches had taken a back seat to the hinterland. Local government was based in Landsborough, Nambour and Pomona where there were sawmills, orchards, cane fields, a sugar mill and the railway line.

The Sunshine Coast Tourist Bureau was formed. In February 1968, the first tourism delegation set off on a two-day promotional trip to Sydney and Melbourne to extol the virtues of this new Sunshine Coast where “there are so many fish in the river that you have to stand behind a tree to bait your line”.

There was some controversy because while the trip didn’t cost ratepayers, most of whom weren’t particularly bothered whether there was a tourist industry or not, it was sponsored by the big land development company Alfred Grant, which was selling the expanding area of Bundilla Lakes behind Mooloolaba.

It was the beginning of a wrangle between two schools of thought – “build and they will come” and “leave us in peace, we don’t want them” – which was to be a constant feature of the region for the next three decades.

It heightened the rivalry with its glitzy sibling the Gold Coast. While one was heading to high-rise and glamour holidays, the other was capitalising on its natural beauty and family friendliness, which only fuelled the development controversy.

1971-79 – Growing up and learning the ropes
East-West Airlines made its first direct flight from Sydney and was considering regular flights at a time when “only jackasses and magpies landed at Maroochy Airport” (later to become the Sunshine Coast Airport).

Within a decade, there were enough passengers for the airport to be upgraded to jet standard. In 1973, Maroochy became the Sunshine Coast’s first shire to gazette a town planning scheme and it was time for some serious infrastructure. Town water and sewerage connections, kerb and channelling and sealed roads were in the spotlight, and sports facilities, libraries and child-care centres became part of the landscape.

The 11-storey Maroochy Sands became the region’s first high-rise in 1973, heightening fears the region was “becoming another Gold Coast”. The first volleys in the great high-rise debate were being fired.

A landscape architect, unheard of before then, was employed and log fencing went up along the waterfront to keep cars off the beach. Growing pains were worsening; so much to be done and so much vision needed for what was shaping up as a fine future if it was handled properly. For example, it was a huge controversy when the little two-lane road that ran along the beachfront from Aerodrome Road to the Boolarong was replaced with four lanes and called Alexandra Parade.

Man-made tourist attractions began to pop up. The House of Bottles in Tewantin, Queensland’s first ‘big’ attraction in 1966, was joined by the Big Pineapple in 1971.

It soon became Australia’s most visited attraction. The Fairytale Castle opened at Bli Bli in 1973, and the Big Cow near Nambour in 1976.

Chifley’s Hotel had a thriving trade at Alexandra Headland and the Boolarong was no longer the only quality restaurant. John Douglas brought upmarket dining to Mooloolaba. Noosa had its own thriving restaurant scene and made news when it was mentioned as the holiday destination of a character in the TV soapie Number 96.

The beaches, though, were still the main attraction. In 1975, Des Scanlan introduced the first air and sea rescue helicopter service, based at his Big Cow attraction. It was moved to the airport in 1983.

1980-87 – The unruly and difficult teenager
As an adolescent, the region shucked off its “country cousin” childhood and stepped on to the national stage as a beautiful but still relatively undeveloped area with one of the fastest-growing populations in the country.

Tourism was taking off and there was a building frenzy to exploit this new pot of property and tourism gold. But the burgeoning growth was becoming unwieldy and in the tumultuous ’80s, development, six-storey limits, beach shadows and population caps dominated the headlines as well as conversations from backyard barbecues to council chambers.

The fear of “ending up like the Gold Coast” was at fever pitch. Locals were split between enjoying the services, conveniences, employment and entertainment versus tolerating crowded roads and beaches, and seeing unit blocks take over the landscape.

The opening of The Sands shopping centre in September 1980 meant no more shopping expeditions to Brisbane.

The three local councils were swamped as applications flooded in to provide housing in all forms – subdivisions of all sizes, canal developments, and beachfront apartments from six-packs to medium- and high-rise towers. The State Government, if called in to over-ride council decisions, usually came down on the side of the development industry with “ministerial rezonings”. It was the Bjelke-Petersen era and Russ Hinze was the Minister for Everything. The Gold Coaster who made little secret of his white shoes, wasn’t overly sympathetic to cries of “no more high-rise”.

The opening of Corbould Park Racecourse in July 1985 was a symbol of the Coast’s coming of age – but change wasn’t coming easily.

1988-97 – A young adult works on its future
And still they arrived, for a holiday or a sea change. Tower blocks changed the face of Mooloolaba and old holiday shacks were disappearing to make way for higher density living. Couer de Lion opened the five-star Hyatt at Yaroomba, and Novotel opened at Twin Waters.

Many locals began to feel disenfranchised as the region’s primary production economy evolved into development and tourism.

The first stage of the Sunshine Motorway opened in January 1990. Finally, there was a new bridge over the Maroochy River to bypass the trip over the David Low Bridge at Bli Bli, which had first made the northern connection in 1959. The new motorway, though, had three toll booths. Tollbusters swung into action and tolls were removed in 1996.

Maroochydore was transitioning from old beach town to serious commercial centre. The Sands provided the foundations for Sunshine Plaza, which opened in 1994 as the region’s major shopping centres.

Butts shopping centre was converted into the Big Top. Duporth Avenue no longer looked like the main street.

By 1996, the Sunshine Coast was the 12th largest community in Australia after growing at a rate well above the national average for more than 30 years.

The Sunshine Coast University College opened in 1996 with 524 students and was “on target to enrol more than 2000 by the turn of the century” by which time it had become the University of the Sunshine Coast. In 2015, there were 12,000 students.

There were also TAFE colleges and private schools; private hospitals as well as the ever-expanding Nambour Hospital and shopping centres.

Built attractions capitalised on holidays crowds. The Big Pineapple, bypassed by the Bruce Highway in 1990, lost its supremacy, but there was now Underwater World, Ginger Town, Forest Glen Deer Sanctuary, Aussie World the Ettamogah Pub, Bellingham Maze and Superbee. Beerwah’s Queensland Reptile and Fauna Park was yet to become Australia Zoo. Many were soon struggling though. It was hard to compete with the Gold Coast’s Dreamworld.

1998-2007 – Putting down roots
Many of the old development issues were resolving themselves. Developer versus green battles had been won and lost, and the amount of land suitable to inspire argument about its future use was rapidly diminishing. Projects once heartily protested, by the turn of the century had become home to a whole new generation of newcomers who had no idea their backyard was once an orange orchard or a pineapple or cane farm. Few cared about what the Gold Coast was doing; this Sunshine Coast was perfect. After another boom and bust cycle, the population hit 186,000 before the turn of the millennium.

A ‘housing estate’ was just so last decade. Now there were master-planned communities, education or waterfront precincts, and residential projects, not estates. More sensitive development with vastly increased landscaping budgets and larger parks was driven more by economics than environment; by consumers not conservationists.

Maroochy Shire was the fifth fastest growing of 825 local government areas in Australia.

Talk turned to creating a coastal city. Funnily enough it was the State Government that said its SEQ 2001 project’s regional approach would put an end to the debate once and for all as it offered local authorities the opportunity to work together while allowing communities to retain their identities, effectively removing any need for a coast city. But in the end that move came from the State Government, and not the parochialism of the three shires which had become fiercely competitive in claiming their slice of the Sunshine Coast.

2008-2017 – Reaching maturity
The Sunshine Coast Regional Council was formed in 2008, although Noosa withdrew six years later. The population had grown at a whirlwind pace. Predictions that it would hit 250,000 had been met with some scepticism, but already it was closer to 300,000.

Many of the tourist attractions were gone and Sunshine Plantation went into receivership in 2009. Tastes had changed.

Another bridge went over the Maroochy River and the Sunshine Motorway became a four-lane highway from Mooloolaba to Pacific Paradise to cope with the traffic.

Maroochydore was firmly established as the key regional centre. The attitude to growth had changed and acceptance became the norm. The old ways were gone forever.

It could be that population growth was so enormous that acceptance arrived by sheer weight of numbers; that environmental activists were achieving their goals; or that the development industry was doing its job well – or even a combination of all three.

It could also be said that the Sunshine Coast itself has grown up. Estates and high-rise apartments that were once the subject of hot contention and are now attractive and desirable places to live.

Growing population is a fait accompli. The only certainty is that the population will continue to grow and it is in everyone’s best interests that our most precious asset, our natural environment, is looked after.

The Sunshine Coast is sitting much more comfortably in its skin.

Read more about celebrating the anniversary of the Sunshine Coast here.

Continue Reading
You may also like...
Related Topics: Sunshine Coast