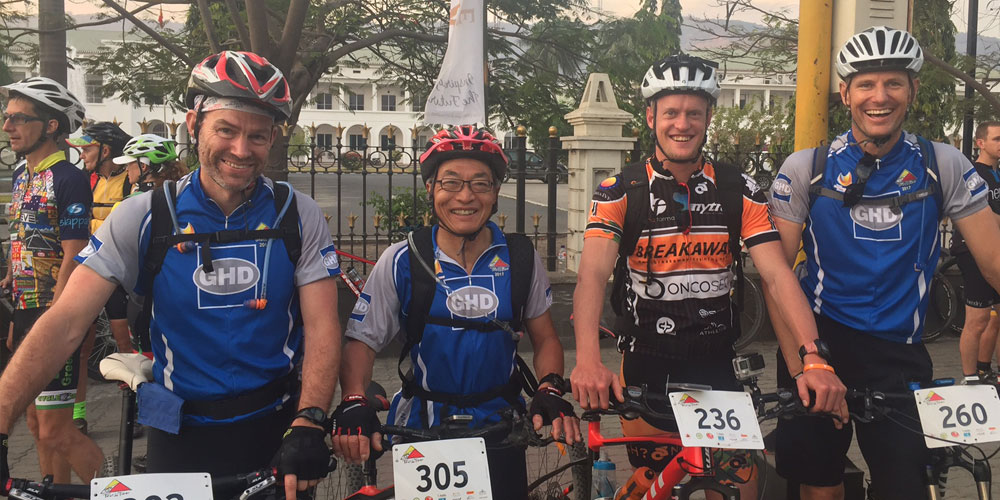 Former Sunshine Coast soldier Eric Kerr is in Timor-Leste on another tour of duty, but instead of donning the camos, this time he is wearing lycra and pedalling for peace.

Kerr, an army veteran of East Timor and Iraq, is leading a three-person team in the gruelling Tour de Timor.

Kerr, Emmett Karstrom, Jon King, and Mike Prince are competing against 380 other riders in taking on the five-day, multi-stage race, which runs from September 19 to 23 and covers around 500kms, including a total of 10,000m of climbing.

The team are representing Caloundra-based not for profit organisation, The Encouragement Foundation, which provides safe and supervised dormitory accommodation through Encouragement House in Maliana for remote, rural students so they can have the opportunity to go to high school.

Kerr last visited Timor-Leste as part of a United Nations Transitional Administration East Timor mission in 2000 to coordinate resupply and distribution of logistics over the shore.

“Even when presented with hardship, the Timorese people remain positive and value their family as the most important element in their life,” he says.

“Every day you spend with the Timorese, the more infectious their enthusiasm and willingness to move forward as a nation shines through.”

Kerr says he is well-prepared for the gruelling race, with decades of running, riding and surfing on the Sunshine Coast under his belt, as well as regular exercise through his role as the U12 Age Manager at Alexandra Headland Surf Life Saving Club.

“I’ve been road riding since I was 13 years old and participating in triathlons in more recent years, but I’m new to mountain biking and I must say in the past few weeks I have learnt the hard way on a few of the technical courses on the Sunshine Coast, entertaining as it was with a number of hard falls,” he says.

Kerr’s goal reaches beyond simply raising awareness of Encouragement House and completing the race. He wants to promote the rebuilding of Timor-Leste through sport and education rather than through war and unrest.

“It is important in life to contribute to a greater cause and make a difference to people who are not as fortunate as we are living in Australia, for the Timorese, they are rich in culture and value the family as their centre of gravity which I admire,” he says.

“The Tour de Timor is a story of human determination, of courage, of rich culture, of untouched natural wilderness, of international sporting excellence, of young Timorese national heroes and of a resilient people who are embracing and celebrating peace in their young nation.”

To support Kerr and the team, visit mikesbigweek.weebly.com and donate.