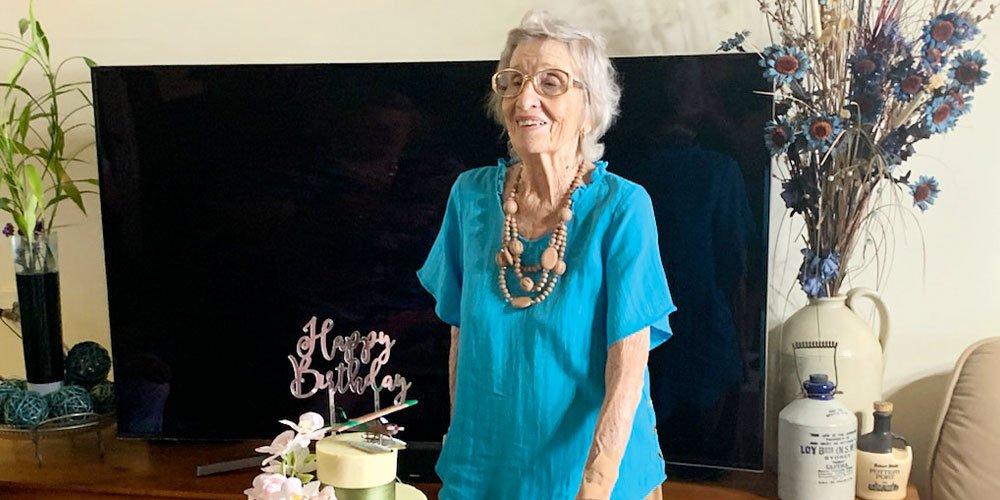 A Sunshine Coast woman with a love of fashion has celebrated a significant milestone, proving age is no barrier to soar to new heights.

Rosalie Fryer turned 90 on January 25 and her birthday wish was to see the Sunshine Coast from above with a sea plane flight, her daughter Lorisa tells
My Weekly Preview.

Born in New South Wales in 1931, Rosalie grew to love fashion, working at June Millinery in Sydney before meeting her husband Ron.

“She met my dad who was in the Air Force for 27 years,” Lorisa says.

Lorisa says the family lived in Victoria, relocating to Queensland after her father’s time with the Air Force.

“They had some relatives who lived in Noosa so they drove up, but it wasn’t for them,” Lorisa says. “Then as they were coming back over the headlands at Alexandra Headland, Dad saw all the yachts and said, ‘this is the place for me’.

“They bought a block at the top of Mary Street and built the family home, which they have owned for more than 40 years. We used to ride the motorbikes up and down there; there was nothing, no units back in those days.”

Rosalie is well-known in the community for her store, Lady Tara Bridal Boutique, which she operated for many years near the Maroochydore McDonald’s until her retirement two decades ago.

To celebrate her birthday, relatives gathered at the family home before Rosalie’s air adventure with Paradise Seaplanes on Australia Day.

“She loved every minute of it.”

The occasion was bittersweet as it was also an opportunity to scatter Ron’s ashes in Mooloolaba bay after his death last year.

“Dad passed away in April and we haven’t been able to give him a funeral,” Lorisa says. “We were unable to see him towards the end due to lockdowns; it was a tough time.

“[Rosalie] has struggled a little bit since Dad has gone, but we have all gathered around her. I think it was a bit of finality for [her] to say goodbye to him properly. The way that we sent him off was perfect because he loved sailing.”

Rosalie and Ron were married for 64 years.

Lorissa describes her mother as well-presented and someone who enjoys being social. “She loves her shopping.”

And her secret to 90 years?

“Mum’s philosophy is she has always kept active and socialising with her friends.

“She like a wine – she doesn’t mind a wine or a gin and tonic every now and then.”

Fast & Furious
A nation in the spotlight