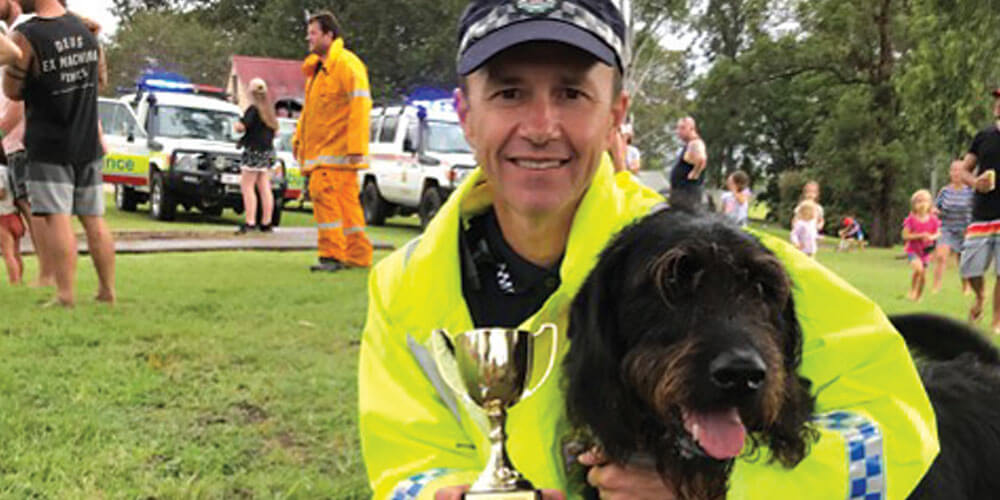 The honour was bestowed on the Kenilworth officer-in-charge in front of more than 50 guests including Police Commissioner Ian Stewart and Police Minister Mark Ryan at an event hosted by the Rotary Club of Sunshine Coast Central.

Snr Const Senekal was chosen as the winner from a pool of six finalists, who were chosen following a Coast-wide nomination process.

The police officer of 10 years describes the award win as “humbling” and is quick to point out that being a police officer means relying on other officers as much as the community to have a positive effect.

Snr Const Senekal has been posted in Kenilworth for the past three years and previously held positions at Maryborough, Tiaro and Coolum before becoming one of the renowned ‘Segway cops’ patrolling Hastings Street for the Noosa Police Beat.

“I’ve since switched to a role that required four wheels,” he quips.

“The highlight of my week is getting out of the office and walking into town to talk with local business owners, residents and visitors as well as going to the school to connect with the children, teachers and parents.

“Police officers require that connection to the community so we can do the most effective work we can.”

Past Rotary District 9600 Governor Carolyn Krueger was one of the driving forces behind establishing the Sunshine Coast Central Police Officer of the Year Awards in 2018 with the Rotary Club of Sunshine Coast Central as a means of growing the program, which started in Darwin and has spread throughout Australia.

“The number of people at the awards night was incredible and the support we have been given from the general public as far as the number of nominations we received has been amazing,” she says.

“Reading the nominations that came in was such an eye-opener and a real glimpse into what police officers across the region do to go above and beyond for people in the community.

“We had nominations for every rank from constables right through the whole range. If I was allowed to have done it, I would have made them all finalists.”

Ms Krueger says Snr Const Senekal received a number of nominations from within his community.

“The message that came over is that he is an outstanding police officer and really does put his heart and soul into his local community,” she says.

Snr Const Senekal says the awards will continue to provide a positive connection between citizens and police officers.

“It’s a really good thing for us as police to see that the community actually see and appreciate what we do,” he says.

“That sort of acknowledgement is good because unfortunately in our line of work, we do get a lot of complaints. Nobody calls us when they win the lottery.

“They call us when there’s a problem, and we have to make difficult decisions sometimes that not everyone is happy with. That’s just the nature of the work.

“But whether it is cases like a 1.5-kilogram discovery of drugs that saw a defendant found guilty and taken off the streets, to arresting and charging a repeat domestic violence offender and seeing them locked up and unable to continue to abuse the aggrieved, it is all rewarding work and why I love my job.”

The winner is able to select a charity to which the Rotary Club of Sunshine Coast Central will make a donation on their behalf. Snr Const Senekal nominated Make-A-Wish Foundation as a nod to the tireless support it gave his family when his son Peter beat liver cancer at the age of nine.

Continue Reading
You may also like...
Related Topics: police