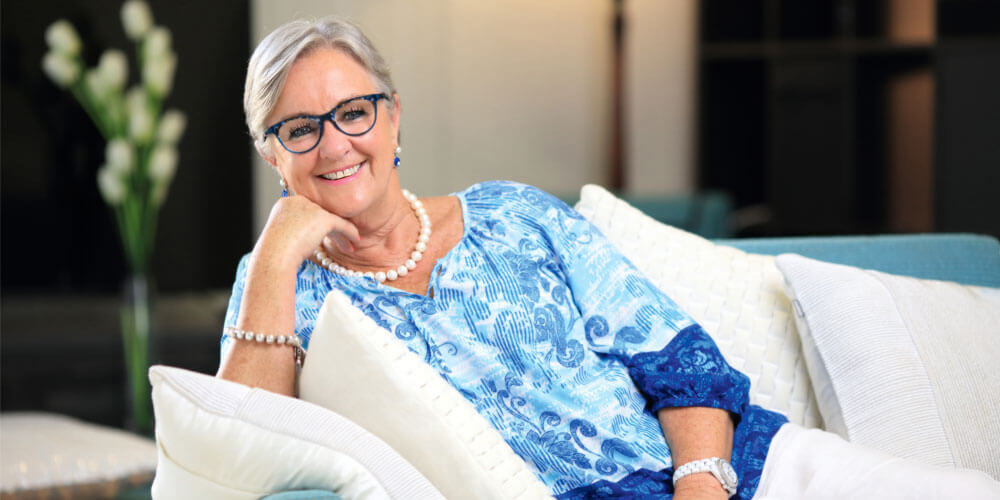 When Suzi Hirst was preparing to go into hospital for her first round of chemotherapy to treat breast cancer, she stepped into the ring by turning up for treatment wearing boxing gloves.

“I wanted cancer to know who it had taken on. I wasn’t going to let it beat me or bring me down,” she says.

“I went into treatment every time with a smile, thinking it was not going to stop me and was only going to make me stronger.”

The now 61-year-old Minyama resident was diagnosed in December 2014 with triple-positive stage 3 invasive ductal cell cancer of the breast that had spread to the lymph nodes.

“You have to stay positive. If you lose that positivity then everyone around you loses it. I thought, ‘this is now my journey and I have to be on top of it as much as a I can’,” she tells My Weekly Preview.

“I’m not a vain person, but I hated seeing myself without hair because then I saw somebody with cancer and I didn’t want to give cancer that face in my life.

“Very few people knew how sick I was, because I always tried to be upbeat and be positive and that’s how I live my life every day now; my perspective has changed in so many ways since the cancer.”

Although she is now three-and-a-half years clear, Mrs Hirst says she will never forget how her world changed “in the blink of an eye”.

“I’m a retired nurse and I’d had a clear mammogram in April/May and I felt the lump towards the end of October, but I ignored it, which was the stupid thing to do,” she recalls.

“In December I went to the doctor for a routine prescription and asked him to check it while I was there. That was the Thursday before Christmas. He got me in on Friday for the ultrasound and they immediately tooka biopsy because they were closing for Christmas.

“I decided not to tell my family at that stage, so when we got the call on the Monday morning to say my doctor wanted to see me, I knew exactly what it was about.”

Mrs Hirst underwent a lumpectomy, six months of chemotherapy, seven weeks of daily radiation treatment and then a bilateral mastectomy and breast reconstruction in a 20-month period.

Breast cancer is now the most commonly diagnosed cancer in Australia and the incidence of it continues to grow.

However, in the 25 years since the National Breast Cancer Foundation’s inception, the five-year survival rate for breast cancer has increased from 76 per cent to 90 per cent.

The NBCF’s ultimate mission is to completely eradicate any deaths from the disease by targeting the remaining 10 per cent over the next 12 years.

Mrs Hirst says there is now so much more awareness of breast cancer and the treatment is now focused on the particular cancer you are diagnosed with.

“I’m HER2 positive, so I was given 18 rounds of Herceptin, which is a miracle drug and with an aggressive form of breast cancer like mine, Herceptin is now keeping patients like me alive,” she says.

“Just 10 years ago, you would die very quickly from HER2. While the treatment is still really tough, there are so many medications and support networks you can tap into that make a really tough journey much easier.

“There are more cancer survivors than ever before, and they are living longer. New treatments are coming out every day, the research is fantastic, and the outlook is positive overall.”

“I also dance with my husband, which was something I didn’t do for 40 years because I felt stupid dancing,” she says.

“All those opportunities I’ve lost by not dancing with my husband. Now I will dance at every opportunity, seize those moments and have fun because that’s what life is all about.”

Mrs Simpson is also a nurse, but has been unable to work while undergoing chemotherapy to combat triple-negative breast cancer.

The first sign anything was amiss came when Mrs Simpson found a dimple in her right breast while at her sister’s wedding earlier this year. “I didn’t feel a lump or anything, but I had a family history of breast cancer and had been going for annual mammograms,” she says.

“My mum died from breast cancer at the age of 44. I had just celebrated my 44th birthday and the fact that I hadn’t had breast cancer and then a few months later…”

A mammogram was unable to detect anything untoward in Mrs Simpson’s breast, so she took it further, booking in for an ultrasound, which confirmed breast cancer was present.

Two days later, Mrs Simpson opted to have a bilateral mastectomy. It was April 18, the day of her 20th wedding anniversary. She later had surgery to remove the lymph nodes from her right side.

“Being someone who has always cared for other people, having to become the patient was a challenge for me, letting people do stuff for you is a new experience. I am forever grateful for what they have done,” she says.

“I take a deep breath and take each day as it comes. It can be overwhelming with all of the different treatment options and information that is given to you very quickly.

“But I am grateful to have a great support network in my husband Andy and daughters Omelia and Hannah, as well as trust in the doctors and health-care providers.”

Mrs Simpson says she has been astounded at how far treatment options for breast cancer have come since her mother battled with the disease.

“When [Mum] had it, there was no such thing as different types of breast cancer. You just had breast cancer, and they were treated all the same. The hormone replacement or blockers you can have now, there wasn’t anything like that.

“Now they can define which type you have and which treatments you will best respond to and that gives you the best chance to beat it,” she says.

“While there is no specific treatment targeted to triple-negative breast cancer, which is what I have, they are putting so much money into research now that it’s only a matter of time before they find something.

“It is reassuring to see so many people celebrating five and 10 years post-breast cancer. One day this will just be a blur in my rear-vision mirror. A time when something in my body went wrong and I had to have it surgically removed.”

Mrs Simpson says regular mammograms and breast screens are essential for women to boost the potential for early detection.

However, she also urges women of all ages to be body aware and check their breasts regularly at home and if they have any concerns at all, don’t waste any time getting to a medical professional to have them checked.

A future where a breast cancer diagnosis is no longer fatal is getting closer by the day, with the National Breast Cancer Foundation (NBCF) focused firmly on its target to reach zero deaths from breast cancer by 2030.

Huge advancements in technology and practices have led to breast cancer research accelerating at a rapid rate.

NBCF-funded researcher Professor Riccardo Dolcetti from the University of Queensland and Diamantina Institute, who is developing a new method of personalised immunotherapy to treat breast cancer, says  this emerging field will target treatments to the genetic make-up of their tumour.

Research into less toxic treatments that could target the cancerous cells and not the healthy cells, less invasive surgery, reducing radiation levels and removing fewer lymph nodes is already underway.

Last Friday, Minister for Industry, Science and Technology, Karen Andrews announced researchers have used the Australian Synchrotron in Clayton, Victoria to develop a new advanced imaging technique, which could be used on the first patients by 2020.

With more than 800,000 mammograms performed in the country each year, this will mean better image quality, a more accurate diagnosis, a smaller radiation dose and less discomfort for patients.

National Breast Cancer Foundation CEO Professor Sarah Hosking says, “We want all women in Australia to feel empowered and assured that we are doing everything we can, through our research, to make a future where they don’t have to live in fear of deaths from breast cancer,” she says.

Fabulous Funky Fashions
When: October 21 from 2pm to 5pm
Where: Kawana Surf Club
What: This is the fourth annual Fabulous Funky Fashions event. Sandra de Jersey began hosting this event in honour of her mum Eileen, who was diagnosed with cancer on three different occasions from the age of 37. Each time, she underwent chemotherapy and radiation and lived until she was 69 years old. Ms de Jersey’s fundraiser includes a fun afternoon tea and fashion parade featuring Australian brand Veducci Clothing. Bring a cup, saucer and a fun attitude as you dress up for the occasion. Tickets are $35 and are available at ticketbo.com.au/funkyfashions. Money raised will go to the Cindy Mackenzie Breast Cancer Program.

When: October 24 from 12pm to 2.30pm
Where: The Surf Club, Mooloolaba
What: The annual Pinktober Lunch will be hosted by Cindy Mackenzie Breast Cancer Program Ambassador and Seven News presenter Rosanna Natoli and features Sunshine Coast Grammar School principal Maria Woods as the guest speaker. Tickets are $100 and include a two-course meal and glass of sparkling wine on arrival. To buy tickets, visit sunshinecoasttickets.com.au/event/pinktoberluncheon-7487.

Information session
When: October 25, 12pm to 3pm.
Where: Bloomhill Cancer Care, Ballinger Road, Buderim
What: Find out from the experts what you need to know about breast cancer and reconstructive surgery. Speakers include breast surgeon Dr Mara Clarson and plastic surgeon Dr Ryan Livingston. RSVP to Bloomhill reception on 5445 5794.

Host your own
A Pink Ribbon Breakfast is a fun, easy way to enjoy a catch-up with friends and family or colleagues, while contributing towards a serious cause – vital and potentially life-saving research that will lead to a better understanding of how to more effectively detect, treat and prevent breast cancer. Simply register at nbcf.org.au/pink-ribbon-breakfast.

Up, up and away
Join the trend and shop local