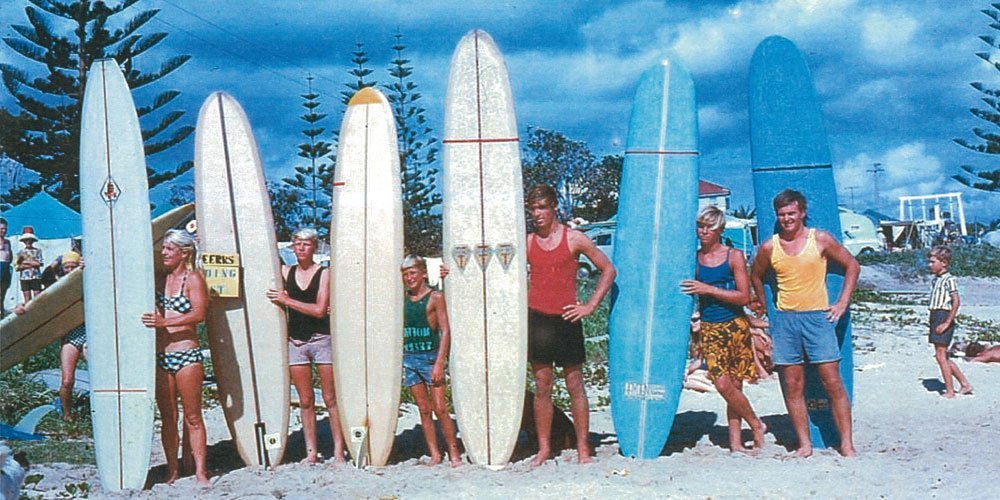 Moffateers competition at Moffat Beach May 1967

Alan Parry has a great story to tell, and its origins stretch back almost 140 years.

Today, the Parry name is synonymous with success, largely due to Mr Parry’s work with the Sunshine Coast-based firm Griffiths Parry Lawyers & Notary.

This month Mr Parry is celebrating 40 years in private practice. Not bad for a man who began his working life without clear direction.

“I didn’t know what the hell I wanted to do,” Mr Parry recalls.

“I had good marks, but I had no idea I’d end up in the legal profession. When I left school I got a job in the Commonwealth Bank. I didn’t like that, so I applied for a job in the public service. They gave me the justice department and put me in the Supreme Court registry where I worked for 10 years.

“There was no work in Caloundra in the 1960s, through the ’70s. A tradesman, that’s all you could be. It certainly was an interesting way to learn the law, working with all the judges and assistant sheriff in the Supreme Court on the Whiskey Au Go Go trials. I developed a fairly intricate knowledge.

“While there, I became interested in the law. I applied to study the Solicitors Board Examination and I did that from ’72 to ’76. I got all my passes. I was 28 when I was admitted. I joined the firm in 1981 and was made partner in 1982.”

“I always knew I was coming back to the Sunshine Coast. This is where my heart is.”

It is where Mr Parry and his wife Faye Rolph became important members of the community. Ms Rolph is credited with the establishment of one of the country’s most prestigious modelling agencies, and the pair’s three children – Trent, Ryan and Monique – have all gone on to build their own successful careers. Mr Parry himself has been involved in the establishment of many iconic Sunshine Coast businesses. 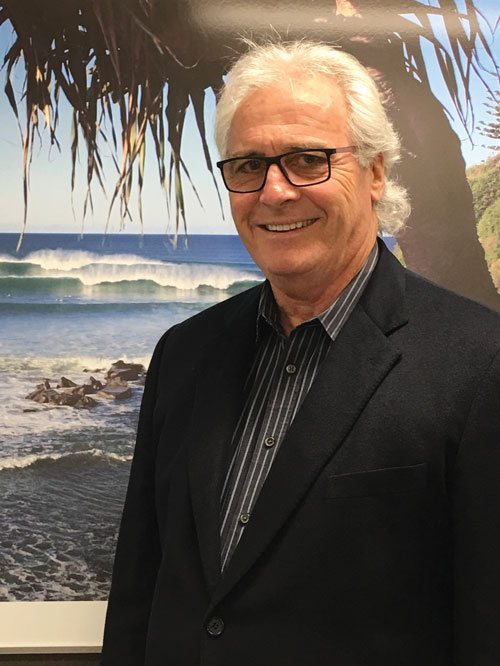 The Parrys are a pioneering family, that’s for sure. And it is a trait that has survived generations of bloodlines, and decades of hard work.

“I was born in Nambour hospital so I’m a true local,’’ Mr Parry says with a chuckle.

The family’s love affair with the region dates back to the 1880s, when Welshman Miciaiah Parry packed up his wife and three children, and boarded migrant boat the SS Jumna, which was bound for Australia.

Among those children was Mr Parry’s grandfather – who was two at the time.

Miciaiah’s relative, Price Jones, who lived in Buderim (both Jones Road and Price Lane are named in his honour) had sent word that this coast-side location was a great spot, and tempted by good fortune, the family made the decision to start afresh.

Upon landing in Brisbane, the Parrys travelled by horseback and buggy to the Sunshine Coast, where they settled on a plot of land, close to where the Kunda Park Pony Club sits now.

Miciaiah worked in “what was the only business in Maroochydore at the time”, the Pettigrew’s Sawmill, which sat on the banks of the Maroochy River. He later acquired a cane farm at Nambour, where he worked until his death in November 1917.

The Nambour & District Chronicle obituary notice dated November 9, 1917, read: “Mr Miciaiah Parry for many years a much respected resident of Nambour passed away on Monday last. Though of doubtful health for some months, he kept at work on his farm across Petrie Creek until a few days ago… He leaves a widow, four sons and one daughter and a big circle of friends to miss his unassuming personality.”

What Miciaiah left was a legacy of hard work and determination – a trait he passed on to his children.

“My grandfather lived in Eumundi when he left home and owned a blacksmith shop there,” Mr Parry says.

“He worked in the timber industry as well, and retired to Caloundra when my dad was 10. It was just before the Second World War. My father stayed in Caloundra. My mother was born in the Maleny Hospital. We are a pioneering family, and I’m proud of that.”

Mr Parry provides a colourful description of growing up in the “small fishing village” of Caloundra, where his father made a living as a professional fisherman. Long before the developments along Bulcock Beach’s esplanade stood tall, the shore was awash with fishing trawlers.

While his dad worked hard to support the family, Mr Parry attended the local schools, and was among the first year 12 class to graduate from Caloundra High.

It was during his high school years that he met Ms Rolph.

“We were cruising around in the Kombi van with the boards on top and saw these girls, so we stopped and had a chat,” he says with good humour.

It was during this time that Mr Parry also formed a strong bond with Sunshine Coast surfing legends Ma and Pa Bendall. Credited as the couple who positively boosted the reputation of surfers, Marjorie and Charles Bendall were responsible for establishing the Moffateers club.

“Ma and Pa established it in 1966 and I was one of the first to be invited to join,’’ Mr Parry tells My Weekly Preview.

“I was 15 at that time. I had started surfing in 1964 in Kings Beach, Moffat Beach. You just carried your board on your head and off you went… a bit like an old movie.

“Ma and Pa looked after all the young surfers and made sure we did the right thing. They established a better culture. Back in those days people used to frown on surfers… they gave us more credibility.

“I used to live for it [surfing], before and after school. Later, Faye, for a time before we came back to the Coast just before we got married, was a Qantas hostess. I used to jump on flights as the husband paying 10 per cent and travel the world. I’d go surfing in Hawaii. I gave surfing away in about 2000. It got too crowded and I haven’t been out in the past 19 years. Now that I’m living where I’m living, the beach is only 90 metres away, I might go out when no one is around.

“I’d do badly these days,” he adds with a laugh.

Perhaps, there will be more time for Mr Parry to rediscover his old passion in the coming years. Though he’s quick to laugh off any talk about retirement.

“Faye is waiting for me to retire. She’d like to live in the south of France for at least six months to get that experience of living in another culture… that’s where we’ll start.” 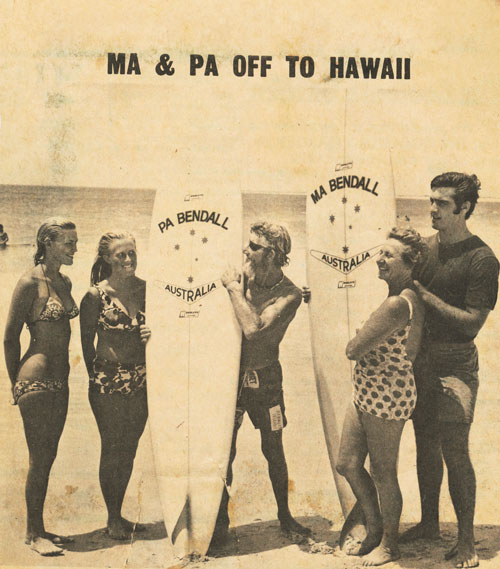 An old newspaper clipping shows Faye Rolph (far left), Ginny Vogler (second from left) and Alan Parry (far right) admiring the boards that Ma and Pa Bendall took with them to Hawaii to compete in the Makaha contest.