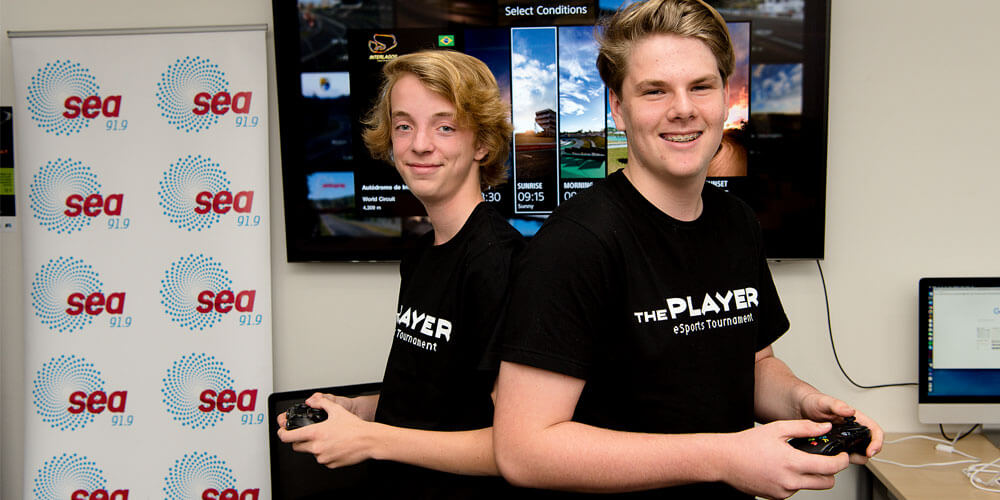 Riley Overs and Landan Porter want other young gamers to come along to their event. (image: Ben Allan)

Landan Porter and Riley Overs are masters of console games, but rather than spending these school holidays in their respective homes battling it out online, they are bringing their passion into a more social sphere by hosting the inaugural The Player eSports Tournament.

The Rosemount teenagers are calling for their peers aged from 14 to 17 to come along to the event, which will feature Project Cars 2 on PS4, FIFA on Xbox One and Smash Bros on Wii, to take part in what is becoming one of the fastest growing phenomenon’s globally, e-gaming.

This face-to-face platform brings competitors together to socialise and build connections with those who are usually invisible companions in another household on the other end of the internet connection.

What’s more, participants can battle it out on the screens with the aim to win the championship and spot prizes throughout the day.

Landan says he is pleasantly surprised their idea has gained a lot of traction across the region, with the Sunshine Coast Council providing them with a grant to get the event off the ground and local charity SunnyKids throwing its event organising skills into the mix and becoming the event’s beneficiary.

Social Media Mastery owner and The Player event manager Lisa Harrison says the championship will also act to highlight some of the potential career options available to gaming enthusiasts, with possibilities ranging from the highly competitive realm of sponsored gaming through to coding, animation and game design.

“The success of this event could see further e-gaming tournaments developed, specifically for programs concentrating on anti-bullying and youth collaboration, which in turn will drive commercialisation and provide additional destination marketing opportunities for the Sunshine Coast community,” Ms Harrison says.

“There is also a very real community need to engage teenagers during school holidays.

“Kids activities are typically organised for those under 10 years and teens of this age group are generally poorly catered for.

“This event will provide a nurtured platform for teens to alleviate boredom, get them off the streets, and basically do what they love all under the watchful eye of our event team.”

SunnyKids CEO Chris Turner says the event will help to build a sense of belonging among participants.

“We have seen online platforms and social media used to negatively socialise young people. A gaming platform ‘in the right hands’ is an opportunity to counterbalance damaging influences with real opportunity to create a sense of belonging for young people, who may or may not feel like they are on the fringe of our community,” he says.

The Player eSports Tournament is on December 16 from 10am to 3pm at The Hive Business Space, 55 Plaza Parade Maroochydore. Tickets are $25 and are available from theplayer.com.au.

The future of Yaroomba
LNP still the Coast’s top pick