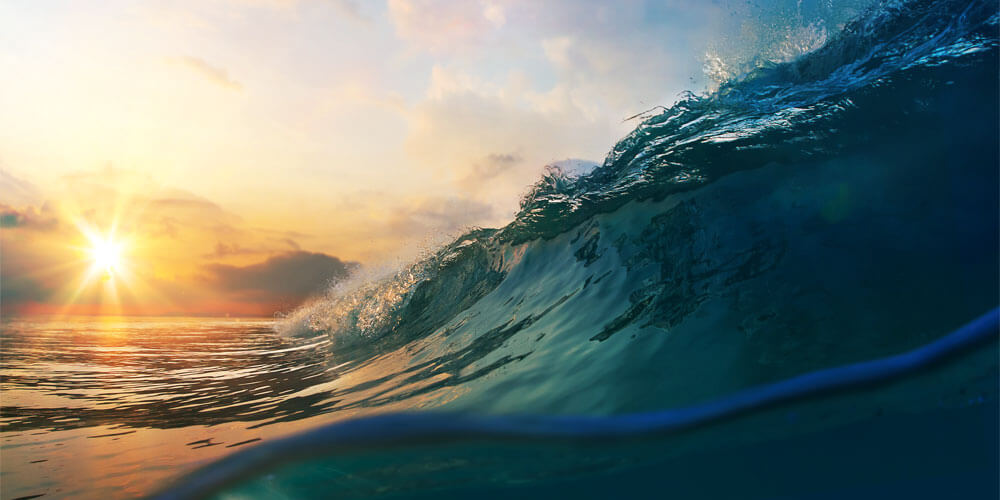 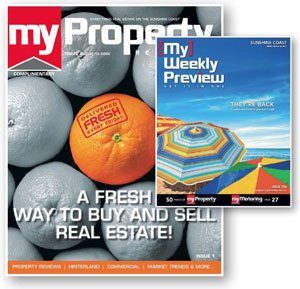 Edition 1 My Property Preview was established on a relatively simple concept. Four local businessmen with a strong background in media formed a small publishing company with almost 50 local business owners who are our shareholders. It was a joint venture born out of the desire to take the ownership of real estate advertising and return it to the community. MPP launched and effectively halved the advertising rates and more than doubled the distribution of the previous offering, to assist local families seeking to sell their properties.

In March 2012, My Property Preview was completely relaunched. In what has been described as a landmark move in the media industry, our 186th edition was branded as My Weekly Preview. Our team viewed a gap in the market and jumped on board to launch a fresh approach to media. The magazine hit the streets brimming with a mixture of local, state, national and international news. Our first signature feature story focused on a vital issue – the growing obesity problem affecting Australian kids, and the importance of exercise. It set the standard for our feature stories which are centred on global or national issues, but with a local twist. 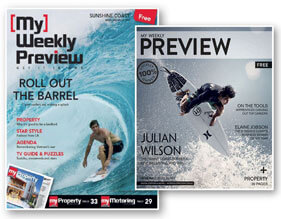 We caught up with up and coming surfer Julian Wilson, who at 24 had recently won his first Association of Surfing Professionals (ASP) World Championship Tour win at the Rip Curl Pro in Portugal. He had also locked down the Nike US Open of Surfing title in California and the Breaka Burleigh Pro in 2012.

Julian became a household name after appearing in Quicksilver’s Young Guns III film and then joining the ASP World Championship Tours in 2011. He finished his first year on the tour in ninth place and was named Rookie of the Year. The following year, he again finished ninth after winning three major events. The 2013 wins were the icing on the cake.

“Those two wins definitely are career highlights for me now and I am quite satisfied to come away from 2012 with three event wins,” Julian told My Weekly Preview at the time.

“To win a World Tour event [in Portugal] was major goal of mine for the year, so that felt great.”

WHERE IS HE NOW?

Julian graced our cover in January 2015 and again in 2017 (what can we say, we love him!). Last year was a big one for the local surfer who pulled his first win in three years, taking out the Billabong Pro Tahiti tour. He and wife Ashley also welcomed their first child earlier this year, a little daughter called Olivia Madison.

Things continue to be on the up and up for Julian, who is competing strongly this season. He cleaned up at the 2018 WSL opening event on the Gold Coast in March and is currently ranked second on the men’s circuit. We are sure it won’t be the last we hear from this talented Sunshine Coast surfer. 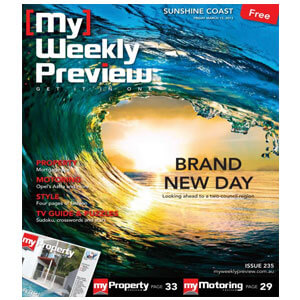 In what was one of the Sunshine Coast’s landmark political decisions, Noosa’s desire to split from the Sunshine Coast Regional Council came to a head with the announcement that the Coast’s northern residents had voted a resounding yes in favour of de-amalgamation and the re-establishment of a Noosa Council.

While it had divided the region, Sunshine Coast Council mayor Mark Jamieson said he welcomed the clear-cut results as it provided certainty for the future.

“We’ll continue to create the right conditions for jobs, protect the environment and preserve our lifestyle,’’ he said at the time.

“This is an exciting time in the history of the Sunshine Coast – and it’s all our jobs to make the most of it.”

Needless to say, the community hasn’t looked back. 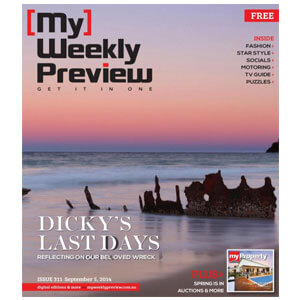 It may have been a rusting hunk of iron, but the decaying skeleton of the S.S. Dicky evoked deep-seated emotions among the Sunshine Coast’s residents and visitors.

For 122 years, the wreck sat on Dicky Beach in Caloundra slowly whittling away as the salt, water, wind and sand destroyed its bones.

In 2014, a taskforce recommended that the safest option was to remove the famous wreck from the beach.

Following the decision, My Weekly Preview took a look back at the interesting history of this iconic ship.

New visitors to Dicky Beach may not know the history associated with that stretch of sand. In 2015 the wreck was dismantled and removed after Sunshine Coast Council deemed it a public safety risk. The council has plans to relocate the S.S. Dicky to an open space within the vicinity of Dicky Beach. 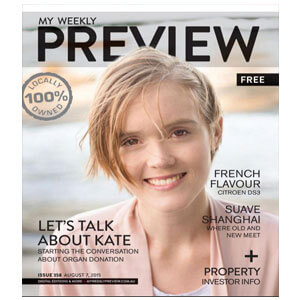 Kate McColm-Fulton is one name we will never forget. The then 24-year-old’s story was one that touched the hearts of many. The university student was on a nocturnal, self-care dialysis treatment plan in hospital three nights a week and living with the rare autoimmune disease Goodpasture syndrome.

This bright and bubbly Coast woman was patiently waiting for the day she received a new kidney. She did not have the option of a live donor – her mother was not a match. In order for Kate to continue living her life, a stranger had to say goodbye to theirs.

“It’s up to the universe,’’ Kate told My Weekly Preview at the time. “There are more people waiting for kidneys than any other organ. The wait list average is four years.

“You’re only given in life what you can handle. This has given me a lot of empathy for other people in this situation and for people who can’t have dialysis.”

WHERE IS SHE NOW?

Following the publication of Kate’s story in My Weekly Preview, a handful of people came forward to offer their help.

However, little did we know that on the eve the story was published, Kate had received a lifesaving phone call. Two days later, she was given a kidney transplant and underwent the two-and-a-half hour surgery. Three years on, Kate is happy, healthy and engaged to her partner Errol.

“My health has never been better,’’ she says. “I am thankful for the amazing gift that has transformed my life. I have just graduated from a Bachelor of Health Science (Naturopathy) and am about to start practicing as a naturopath.” 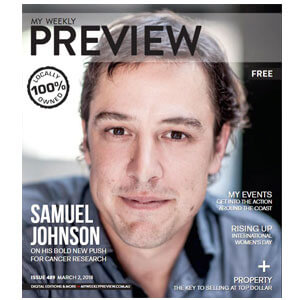 The actor has retired from his career to focus on a vital medical campaign in the name of his sister Connie, who lost her battle with breast cancer in September 2017. Samuel is working alongside researchers, private enterprise and the public to establish Australia’s first metastatic tissue bank.

Samuel’s charity Love Your Sister, which he formed with sister Connie in 2013, has raised a almost $8 million, and with a goal of $10 million, he has become a full-time cancer crusader. To donate to the cause visit loveyoursister.org. 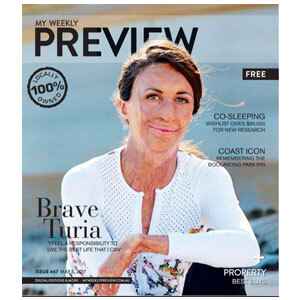 Inspirational woman Turia Pitt spoke with My Weekly Preview in June 2017, when she was on the Coast to promote her book, Unmasked.

The Australian icon spoke about her recovery from the fast-moving bushfire she was caught in while competing in an ultramarathon through Western Australia’s Kimberley region in 2011. The audience of more than 300 who listened to Turia at a Sunshine Coast Libraries event were in awe of her down-to-earth nature and zest for life. In the six years since the fire, she had competed in various challenging events and raised more than a million dollars for her favourite charity, Interplast.

WHERE IS SHE NOW?

Turia and her fiancé Michael Hoskin welcomed their gorgeous baby boy Hakavai, which means ‘dance of the water’ in Tahitian, in December. She is thriving as a mother and continues to work on her business, School of Champions. 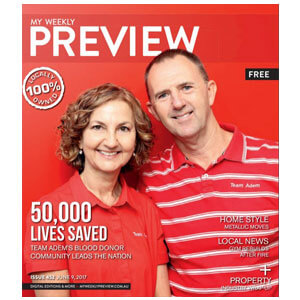 On the eve of National Blood Donor Week, we met with the couple behind Team Adem, a blood donation community that at the time had saved 50,000 lives.

Before his death, Adem founded Team Adem to raise money to help support families of seriously ill children diagnosed with cancer. In 2016, it was announced that the Comprehensive Cancer Care Unit at the Sunshine Coast University Hospital would be named the Adem Crosby Centre and in 2017, Team Adem was the largest Red25 Blood Donation Community in Australia. They had also raised $750,000, which was used to help a number of organisations including the Leukaemia Foundation.

Since then the Team Adem community has continued this lifesaving work and donated thousands of dollars to various organisations. At the beginning of this year, they reported that the blood donation community made a lifesaving difference to 15,939 Australians in 2017, and the overall figure of lives saved by the community has surpassed 60,000. 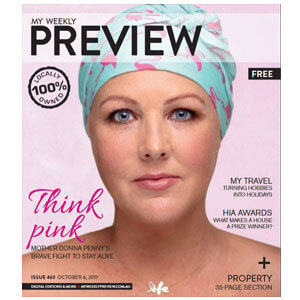 In 2013, the Warana mum to two children and three stepchildren was given the devastating news that her breast cancer, first diagnosed in 2008, had returned. Her youngest son Kai was the inspiration for Donna’s book Why My Mummy?, which gained national media attention when it was published in 2016. “I can’t talk for all women with stage four breast cancer, but I’ve been lucky to live a full life,” Donna said.

“I’m not scared of dying – I’m scared of leaving my kids, especially Kai, because he’s still at an age where I don’t want him to forget me. I just need to get him a bit older.”

Donna has continued to fight the good fight, and although her health is failing, she continues to share the vital message of early detection. Her positivity continues to shine through her pain. “I’m not giving up, my heart and head won’t allow that,’’ she says. “I just want people to live life and follow their dreams because when you don’t have health and can’t do all the amazing things you want to do, life can get hard. Never take your health or happiness for granted – life is too short.” 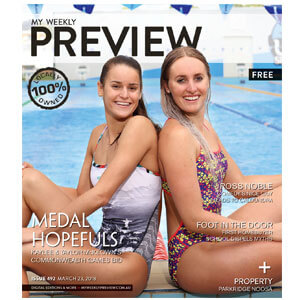 It was an honour to feature these talented sisters on the cover of My Weekly Preview.

As the Gold Coast prepared for 6600 athletes and team officials to gather for the Commonwealth Games, we spoke with swimming stars Taylor and Kaylee McKeown. They joined 30 other Sunshine Coast athletes at the Games. Taylor, 23, was competing in the 200-metre breaststroke and 200-metre medley, while 16-year-old Kaylee’s main event was the 200-metre backstroke.

HOW DID THEY FARE?

While they didn’t come away with any medals, both girls did their country – and the Coast – proud. Kaylee placed fourth in both the 100- and 200-metre backstroke, while Taylor placed fifth in the 200-metre breaststroke. We know this won’t be the last we see of this pair, and we wish them the best of luck for their future.

Continue Reading
You may also like...
Related Topics: History, journalist, My Weekly Preview