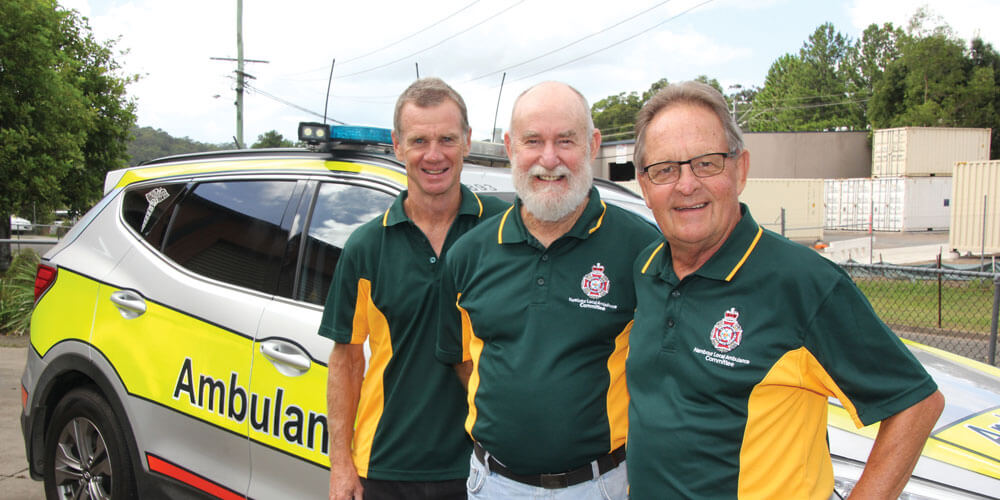 So much has changed for the Nambour branch of the Queensland Ambulance Service in the past two decades. The technology and vehicles have evolved, the location has changed a few times and the number of staff has continued to grow, but there has always been one constant – the men at the helm of the Nambour Local Ambulance Committee.

On February 2, Gary Langford, Geoffrey Brown and Greg Biggs will be recognised with 20-year service medals for their dedication to the Queensland Ambulance Service (QAS) and wider region.

When they were first instated as executive committee members, Mr Langford was the president of the Nambour Chamber of Commerce, Mr Biggs owned a McDonald’s restaurant and Mr Brown was a solicitor.

“A lot of water’s flowed under the bridge since then,” Mr Langford says. “We got a new station 10 or 12 years ago and the old one has been decommissioned.

“We had to build the new station because of the increase in demand for the service and we’ve gone from probably about a 12-person station to a 40-person station … and about four new vehicles to now about 15 vehicles.”

Mr Langford says the thing that drives him most to continue volunteering is that the QAS is such an integral part of the community.

“I’d like to think indirectly over the years we have had a hand in saving so many lives,” he says.

“We have purchased well over $600,000 worth of equipment during our time with the QAS so our paramedics can go out into the community and save lives, making them one of the most well-respected professions in Queensland, if not in Australia.

“To be recognised as being part of that, albeit on a committee level, is very gratifying.”

Their role has evolved considerably over the years, with a large State Government health budget reducing the need for the committee to fundraise for essential items.

Mr Langford says they now act largely as conduits between the community and the QAS, and conduct CPR awareness programs.

Mr Biggs says he has enjoyed every moment of working alongside the committee.

“From a personal point of view, anything that we have been able to do to assist the ambulance officers and paramedics has been a privilege, as the work these people do is truly remarkable,” he says.

Assistant Commissioner Sunshine Coast Local Ambulance Service Network Tim Eva says the trio are a shining example of what is possible if people commit “for the long haul and continue to maintain their enthusiasm”.

“Gary has been the president for the entire time and that is a rarity in itself. These men are very motivated and very community-minded.

“The Nambour and wider community are lucky for them to be steering that conduit and providing that public voice to keep the community informed while supporting us to achieve our service goals,” Mr Eva says.

Mr Langford, Mr Brown and Mr Biggs will receive their service medallions at a private function held after the Nambour Ambulance Station Open Day on February 2 from 10am to 1pm.

The event will allow people to see a mix of modern and vintage QAS vehicles and equipment, participate in CPR awareness sessions and meet the people who save lives.

If you would like to organise a sports group, business or social group to have a CPR session at another time, contact Mr Langford on 0412 348 533.

Bloomhill cancer care in crisis
Act now for your ovaries