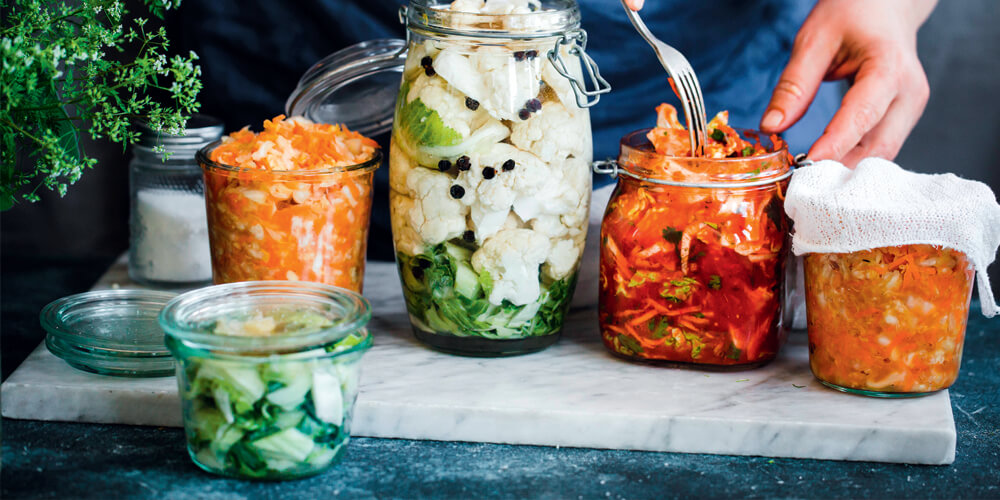 As you read this, there are trillions of tiny creatures dancing around in your stomach.

Scientists believe there are around 1000 species of different microbes living in our gut – making it more complex than any rainforest in the world.

Until recently, the gut and its associated problems – bloating, gurgling, indigestion – were not topics deemed socially acceptable for the dinner table.

But, scientists, doctors and health gurus alike are now screaming the words ‘healthy gut’ from all corners of the globe. And, if you haven’t heard the rumblings, it’s time to sit up and listen.

Everyone from researchers at Harvard to those at the John Hopkins School of Medicine are talking about the gut.

Why? For good reason.

It is estimated that half of the Australian population will suffer from a digestive problem in the next 12 months, with microbiota connected to diseases including mental health, stroke, asthma, obesity, diabetes and even pre-eclampsia in pregnant women.

As Ancient Greek physician Hippocrates once said: “All disease begins in the gut’’.

Unfortunately, it’s taken modern civilisation around 2500 years to catch up.

It is believed around 90 per cent of research into the issue has been published only in the past five years. Researchers, authors and nutritionists are now dishing out facts, figures and food suggestions as the topic takes hold. The research is coming thick and fast.

In May, the American National Institutes of Health revealed that a pre-clinical study linked gut microbes and the immune system to a genetic disorder that may cause stroke or seizures. The study indicates that gut bacteria can influence the structure of the brain’s blood vessels.

In Australia, a clinical trial published in May in the Journal of BMC Medicine revealed that dietary improvements benefiting the gut may improve the management of depression.

Meanwhile in February, the Australian Government announced $4 million in funding for the nation’s first micro gut health research centre. The Microbiome Research Centre at Sydney’s St George and Sutherland Hospital campus will investigate microbiota in the gut and how it causes disease.

So, for those of us who want to learn more, what exactly is the gut and what do we need to know?

According to The Gut Foundation the gastrointestinal tract is made up of seven key organs – the gall bladder, large and small intestines, liver, oesophagus, pancreas and stomach.

Interestingly, every human has a unique gut just as we have unique fingerprints. And, what it can do is nothing short of amazing.

Research proves that this particular body organ is hugely responsible for our physical health and mental wellbeing.

Stress, antibiotics, lack of exercise and poor diet all contribute to an unhealthy gut, which in turn can lead to health conditions such as bloating, irritable bowl, leaky gut, certain cancers, diabetes and a range of auto-immune diseases.

If we can find the right diet to suit our microbiome, we can alter our destiny in regards to disease. For example, scientists believe that people with a predisposition to diabetes can change their health journey.

Sutakowsky recently launched Sunshine Coast Gut Clinic – a practice thought to be the only one of its kind in Queensland – and she says food choices can help the gut microbiome to thrive or diminish.

“At its simplest, it’s about eating a variety of foods, eating plant foods,’’ she tells MWP.

“Being stressed out isn’t good for the system. Smoking, too much alcohol, not sleeping enough are all things that are thought to have a bit of a play on the gut microbiota. There is so much investment in research into this field. It (the gut issue) is not going away any time soon.

“The gut is emerging as a key organ for health and appears to play a role in everything from obesity and diabetes to Alzheimer’s disease.”

Sutakowsky, who has a Bachelor of Science with a diploma in nutrition and dietetics, decided to branch solely into the field of gut health after she recognised a pattern in patient referrals – 70 per cent were for IBS, diverticular and coeliac diseases – a consequence both of the way we live our lifestyles and how we eat.

“There are more processed foods, we are frequently eating takeaway and dining out. In regards to food choices, we tend to eat less wholesome and whole foods,’’ she says.

“Twenty-seven per cent of women over 45 years of age suffer from chronic constipation. One in 70 Australians has coeliac disease and as diagnosis becomes easier, these rates are expected to rise. IBS is prevalent in around 15 per cent of Australians.

“What we know that keeps coming up [in research] is the more types of plant food people eat, the better the microbiome.’’

Fermented foods have become the new kale, with most people believing it is the way to a healthier gut.

While foods such as kimchi and kombucha are beneficial, Sutakowsky says it comes down to a lot more than that. To establish a healthy microbiome we need abundance and diversity.

“It comes down to the variety in what we eat. It’s a boring message but it’s important. We need a good variety of fruit, vegetables, legumes and wholegrains.

“These are the foods that are fermented [naturally in your body]. Fermentation happens in our colon. Fibre reaches the colon undigested, as does resistant starch. Resistant starch is found in cooked and cooled carbohydrate foods such as rice, potatoes, pasta, oats. Fibre and resistant starch are called prebiotics. They nourish the good bacteria in the bowel.

“These prebiotics are fermented by the good bugs in the colon. The fermentation process produces short chain fatty acids such as butyrate and acetate.

“Butyrate is a fuel for the cells lining the colon that encourage cellular growth. This leads to improved intestinal barrier function, reduces mucosal inflammation and improved intestinal motility. The thought is that it’s really important in the prevention of colon cancer.

“When the good bugs are fermented they grow themselves [without the help of additional probiotics].”

The gut’s influence on mental health is another focal point of research.

While medical practitioners have always understood that the brain can affect the gut, causing butterflies or tummy upsets, new research shows that it works both ways.

This is why the gut is now referred to as the ‘second brain’ and a healthy diet is vital.

The gut is connected to the brain by more than 100 million neurons and the two are in constant communication.

The theory has strengthened as a result of new research and medical advancements, including faecal transplants, which are used to restore the gut microbiota.

Anecdotal evidence that recipients of faecal transplants mimic the mood and characteristics of donors was revealed at the Royal Australasian College of Physicians Congress held in Melbourne during May.

Interestingly, although the DNA of humans usually only varies between 0.1 per cent – 0.5 per cent, the mixture of microbiome varies as much as 80 per cent.

Associate Professor Patrick Charles from the Department of Infectious Diseases at Austin Health spoke of the connection ahead of the event:

“It is only now that we are beginning to recognise and understand the influence of microbiome on both our mind and body.

“Anecdotally, I have heard stories about patients experiencing fluctuations in their mood after receiving a faecal transplant.

“There have even been reports that patients with no prior history of depression have become depressed after receiving a transplant from someone with depression.

“There have also been cases where dramatic body changes have occurred – both rapid weight gain and weight loss, each time aligned to the donor.

“As the health sector continues to experiment with faecal transplants for various conditions, careful selection and screening of the donor has to remain a focus.

“We’re still really only just scratching the surface of what impacts microbiomes have on health and disease, but as DNA sequencing techniques advance, so will our understanding of their role.’’

Naturopath Jodi Chapman is the director of the Sunshine Coast’s Advanced Wellness and Behavioural Centre. She is not surprised by the findings that link the gut and brain.

“Many of the brain neurotransmitters are not only used in both the gut and the brain, but they are also produced in the gut, so when your gut is inflamed, not functioning or nutritionally deficient, your brain becomes unable to function at the capacity it is required to,’’ she tells MWP.

“Just to name a few, serotonin is used approximately 10 per cent in your brain for a healthy happy mood, and 90 per cent in the gut for bowel movement and contraction. When serotonin is low due to high stress, sometimes constipation or diarrhoea is your response, and that can be immediate.

“If your gut is unhealthy or you eat the wrong foods, you can immediately suffer with low serotonin, triggering either anxiety, anger, irritability, migraine, headache, sugar or alcohol cravings, or sadness.

“Dopamine is another brain chemical that is produced in your gut, from proteins derived from your diet, though converted by specific good bacteria.

“When levels are low your brain will feel mentally exhausted, unmotivated, and unable to feel elated or a sense of achievement. Physically, low dopamine produces adrenaline, producing your physical energy allowing you to exercise, or provide the energy you require for day to day tasks.

“Many more brain chemicals, such as acetylcholine, and GABA also play dual roles involved in both gut, body and brain affecting digestion, the ability to relax, and to reduce anxiety.”