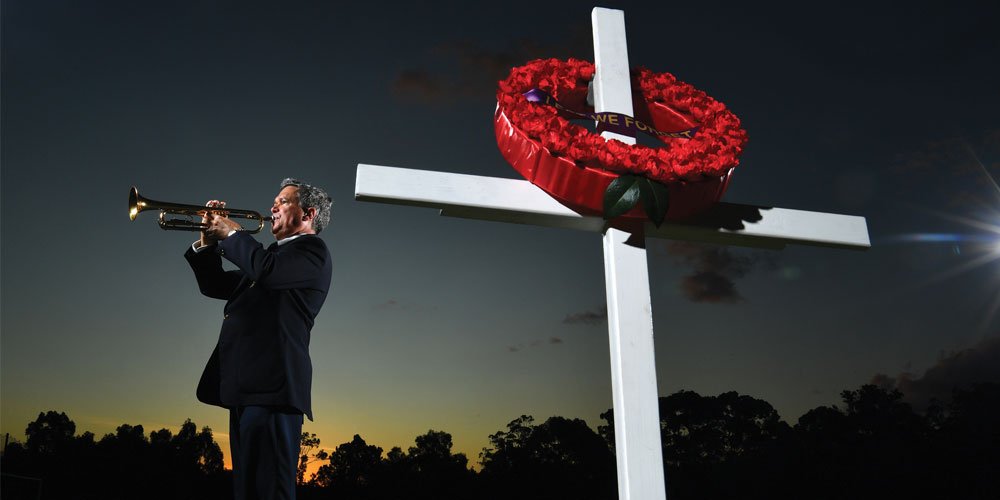 At the going down of the sun and in the morning, we will remember them. But we will remember them in a very different way this Anzac Day, April 25. With Anzac Day ceremonies, services and parades cancelled this year due to the COVID-19 pandemic, RSL Queensland is calling on us to commemorate our servicemen and women with its Light up the Dawn initiative.

We are being encouraged to gather on our driveways at 6am with a candle for one minute of silence, to remember the fallen and all who have served their country. RSL Queensland will be live streaming a short commemorative service, comprising The Ode, The Last Post, a minute’s silence, Reveille and the national anthem.

For Maroochy RSL president, Michael Liddelow, forgoing the traditional Anzac Day commemorations is tough, but he and fellow servicemen are getting on with it.

“It is a very hard time for us in the veteran community, not being able to do what we usually do,” he says. “Our dawn service usually has between 3000 and 5000 people, we have the march, guest speakers, bands. But this year we can’t have any gatherings or the dawn service and parades. Where we’re at is that we still need to commemorate it, but discreetly.

“There is a push to gather at the kerbside or in our driveways at about five minutes to six, take a candle out and observe one minute of silence at 6am.

“The Last Post may be played on local radio stations to add a bit of solemnity to the occasion.

“We can’t have any public gatherings at the cenotaph [at Cotton Tree] but if individuals in their own time would like to pay homage while they’re on their daily walks, they can do so as long as there are no gatherings.”

Mr Liddelow says Australians today are being called on to foster the Anzac spirit when it comes to the tough measures we are being asked to follow.

“Anzac Day is not just a date, but rather a spirit,” he says. “It’s a time to reflect on the qualities of past generations who displayed sacrifice, resilience, courage, resourcefulness and friendship. Some of those qualities are coming through today in regards to the isolation we’re experiencing with COVID-19.

“When you look at the spirit of the Anzacs, it’s something that has been passed on through the generations.

“Any war has an effect on a community, with our loved ones serving overseas in arduous conditions and in some cases, conditions that are unspeakable. War is something that is unbearable and does cause casualties.

“We’re fighting another battle on our own home front now and we need to be resilient and rely on each other and give that self-sacrifice by staying at home. There is discipline that goes with that and the courage to face what is in front of us and the reality that it will take time for this to disappear.”

The president of Caloundra RSL Sub-Branch, Geoffrey Gardiner, says the dawn service at Kings Beach, which attracts around 5000 people each year, will not be going ahead, but it doesn’t mean this important day will be overlooked.

“On behalf of the sub-branch specifically, but also what we call the military family generally, and every other interested person, I will be laying a wreath at our cenotaph in our memorial gardens at the Caloundra RSL precinct. I’m doing that at an undisclosed time, because I don’t want people attending. I’m in the process of organising a bugler to play The Last Post and a camera person. I will be laying one, single wreath and there will also be a flag raising, but again, we are not disclosing the time.

“Anzac Day is far and away our biggest day on the commemorative calendar, the day we normally put all our resources into. It’s a big day for veterans, a big day for serving members, a big day for those families of people who have served in any capacity.”

Many of us are experiencing sadness and grief during this time of isolation, however, Anzac Day is a day we can unite, albeit in spirit rather than in person. Mr Gardiner and Mr Liddelow are doing what they can to ensure we don’t forget the importance of the day, but are philosophical about the situation we all find ourselves in.

“It’s outside our control,” Mr Gardiner says. “A lot of us in the military know you have to improvise in line with prevailing conditions. We do what we have to do and we do what we can do.

“People will gather in their driveways and they are being encouraged to play The Last Post on their smartphones to commemorate it in that way.

“Sometimes we forget that our members have been in the military and it’s not always rosy in the military. You’ve had to put up with hardships over the years, and if any group is equipped to do it, we are.”

HISTORY OF THE ANZAC MARCH

HOW WE WILL REMEMBER THE ANZACS THIS YEAR

Visit rslqld.org for information on how to commemorate all who have served and sacrificed this Anzac Day.