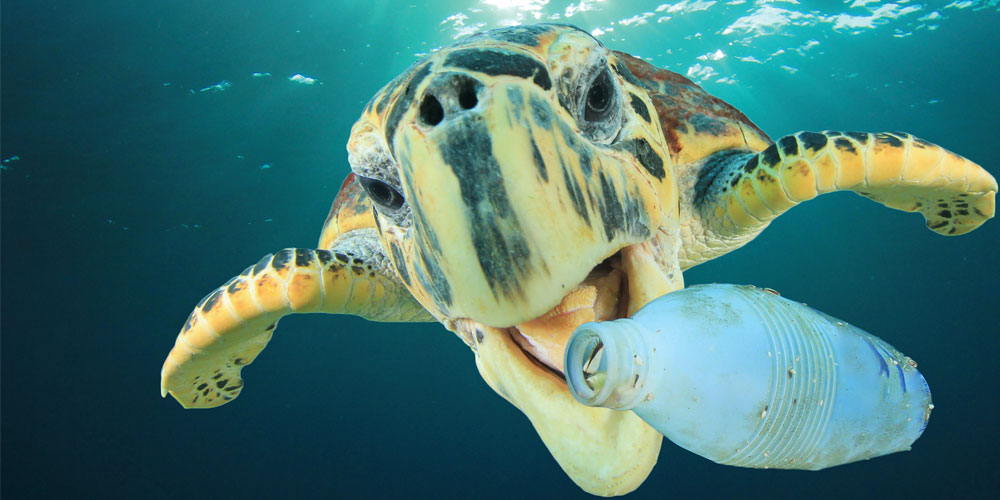 It’s the world’s biggest rubbish dump – and it’s located in the ocean.

Estimated to be larger than the Northern Territory, and closing in on the size of Queensland, the Great Pacific Garbage Patch is a grimy soup of plastic – 80,000 tonnes of the stuff to be exact, or the equivalent weight of 50,000 cars.

Word from the UN environmental program is that the patch is growing so fast that, not unlike the Great Wall of China, it is becoming visible from space.

The patch, which contains 40 times more plastic than plankton, is basically one big garbage vortex, sucking rubbish into its stable centre from far and wide.

Here you will find everything from straws, bottles and cups through to a 1995 Nintendo Gameboy, a 1989 hard hat and a plastic crate dating back to the ‘70s.

Alarmingly, 80 per cent of the debris comes from the land, much of it non-degradable. The reality is almost too terrifying to grasp.

Lying between California and Hawaii, the phenomenon was discovered in 1997 by an American sailor and studies show that the plastic floats beneath the surface to a depth of around 10 metres.

The patch contains 1.8 trillion pieces of plastic and is getting worse rapidly, according to research published in the journal Scientific Reports in March as part of the biggest study to date.

Conducted by The Ocean Cleanup, in conjunction with six universities and an aerial sensor company, the study revealed the extent of the problem is larger than initially thought – up to 16 times higher than previously estimated.

“We were surprised by the amount of large plastic objects we encountered,” says chief scientist, Dr Julia Reisser.

“We used to think most of the debris consists of small fragments, but this new analysis shines a new light on the scope of the debris.”

The not-for-profit Ocean Cleanup group is the brainchild of 23-year-old Dutch inventor Boyan Slat and consists of more than 70 engineers, researchers, scientists and computational modellers who work daily to rid the ocean of plastic.

Mr Slat has gained global attention since launching the foundation five years ago, raising more than US$31 million for the project. Last week he told the world he would bring forward the launch of his 600-metre cleanup system to 2018, with trials to begin this week.

What began as a pipedream now has the potential to save millions of sea creatures and preserve our environment. It is hoped the device will “clean up 50 per cent of the Great Pacific Garbage Patch within five years”.

According to the research, this patch is only one of the five offshore “plastic accumulation zones” in our oceans.

It is predicted that by 2050, the amount of rubbish in the ocean will outweigh the number of fish if drastic measures aren’t taken now.

Although removing one-time use plastic bags is a step in the right direction, it’s just a drop in the ocean – literally.

From the keyboard you type on or the pen you hold, to the straw you sip from, the lenses you look through and the $20 note you hand over to the store cashier, no one can go a day without coming into contact with plastic.

Spend five minutes Googling plastic in oceans and you are sure to feel a gut-wrenching guilt.

“There is no question that we need to change our addiction to plastic,’’ Ms Salmond tells My Weekly Preview from her Mooloolaba base.

“We need to make conscious decisions and stop thinking that recycling will fix it. It won’t. We need to think about our actions, and actively choose alternatives. Take your own coffee cup or go without. You will stop forgetting very quickly.

“Buy second-hand and local. Buy fresh produce from farmers markets. Think about nude food. Each one of these actions can make huge impacts.”

In her years as a marine biologist, Ms Salmond has worked everywhere from Sea Life in Mooloolaba to Christmas Island and Mozambique, and has also tagged turtles on Lady Musgrave Island.

“I have been lucky enough to work in a variety of places around Australia and the world and marine debris is in my opinion one of the biggest issues facing our marine ecosystems to date,’’ Ms Salmond says.

“Studies show at least 663 species are affected by marine debris, including all sea turtle species, half of all mammal species and one fifth of all sea bird species. In addition to entering the food chain, plastics can result in entanglement and entrapment for many species.

“Every beach I have ever been to has items of marine debris on it. Some of it floats into these areas, and some is local.

“The idea is to understand the source of the debris, so we can minimise or eliminate it at the source, stopping it from entering our waterways in the first place.

“There’s over 11 billion pieces of plastic debris on coral reefs in the Asia-Pacific region alone. Plastic has devastating effects on our environment; endangering wildlife, destroying habitats and entering our food chain.

“Animals from whales to turtles, to sea birds and plankton, the very smallest creatures of the ocean ecosystem, are ingesting plastics regularly.”

It is estimated that up to 15,000 sea turtles are entangled in, or harmed by, marine debris in Australia each year.

One person who sees the devastating effect plastic has on our turtles is Sea Life Sunshine Coast aquarist Jesse Hart.

Mr Hart, who has worked at the Mooloolaba aquarium for 10 years, plays an integral role in the organisation’s hospital, which takes care of sick and injured turtles.

Speaking on the eve of World Turtle Day, which will be celebrated on May 23, Mr Hart says his goal is to help educate the public to take care of wild animal populations across the globe.

“The public and volunteers have been bringing turtles into Sea Life since we opened in 1989,’’ he says.

“We upgraded our turtle hospital a few years ago.

“On arrival, we give them [the turtles] a health assessment and then work with our veterinarian to create a treatment plan to help the animal return to full health.

“Depending on the condition of the animal, this will include antibiotics, vitamins, target feeding, sometimes wound dressing and lots of TLC.

“Sea Life Sunshine Coast has cared for over 1000 turtles in its nearly 30 years of operation.”

Mr Hart says there are a number of ways the average person can help the plight of our wildlife.

“Pick up rubbish, even if it’s not near the beach. Do not use plastic, use other alternatives.

“Make pledges to save the environment. Join local volunteer groups and help them when it is turtle nesting season on the Sunshine Coast.

“If we don’t protect the turtles, they and many other marine creatures will become extinct. If we protect our sea turtles, we will also be saving our oceans.”

In addition to the turtle hospital, Sea Life has taken its environmental work one step further by coordinating monthly beach cleanups along Mooloolaba Beach.

The community-based program resulted in the removal of 360 kilograms of rubbish from the area in 2017.

In February, more than 300 people collected 843 kilograms of debris from beaches and waterways as part of Sunshine Coast Council’s annual cleanup event.

Given that ingestion of marine debris is one of the major causes of death in hatchling sea turtles, it is a step in the right direction, says Ms Salmond.

“We always have hope.

“Every single action counts, and as more and more people join the zero waste movement, our actions are amplified, but we certainly have a ways to go.

“Our planet cannot continue on the path it is on, or we will all be swimming in a sea of plastic in no time.

“In terms of technology, I believe it will continue to develop and maybe that can help reduce the plastic issue over time.

“Let’s stop trying to clean up the mess we made, and stop making a mess in the first place.

“Remember –we can all make a difference to the health of our environments. We can change the trajectory we are currently set on. What will you do to break the habit?”

Sea turtles have been living on Earth for around 150 million years.
These are the biggest threats facing sea turtles:
• Entanglement in fishing gear
• Poaching and illegal trade of eggs, meat, and shells
• Unsustainable development
• Plastic and other marine debris
• Global warming
• Ocean pollution.

How you can help

Jodi Salmond of Reef Check Australia says there’s something each of us can do about the issue of marine debris. Here are a few ideas:
• Carry a reusable water bottle, coffee cup and carry bag with you wherever you go.
• Skip the straw. Ditch single-use plastics like straws and cutlery.
• If you see plastic debris, please pick it up and put it in the nearest bin.
• Check out reefcheckaustralia.org for more ways to help. And don’t forget – it’s up to us to break the waste habit.

Peter Watt, the bloke with the big stories
Arts on the horizon