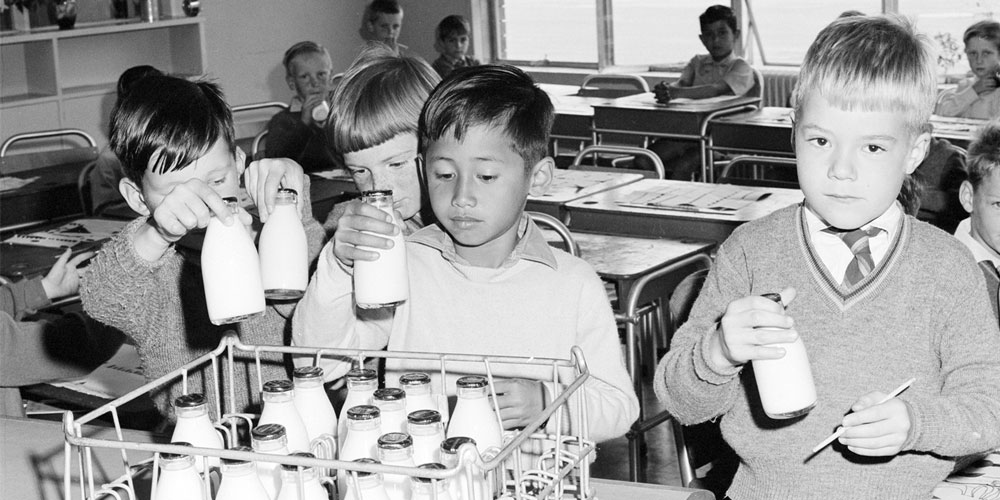 It seems a cruel irony that back when you could eat your own weight in sugar from the canteen and no one would bat an eyelid, children were a lot leaner than they are today. While school canteens are not the prime cause of today’s childhood obesity problem, they do play their part and with a quarter of Australian children now overweight or obese, school canteens have been forced to evolve.

Despite providing only a fraction of the food children eat overall – around seven per cent according to David Edwards, CEO of the Australian School Canteens Association (ASCA) – the school tuckshop provides an opportunity to educate children about healthy eating.

The push towards healthier canteens intensified when the Australian Government funded the National Healthy School Canteens (NHSC) project as part of the Australian Better Health Initiative.

Commencing in 2008, the project has developed national guidelines to help canteen managers make healthier food and drink choices for schools: foods in the green category are safe to have on the menu at all times, foods in the amber category should be selected carefully, and foods in the red zone are not recommended for canteens.

For its part, Queensland introduced Smart Choices – Healthy Food and Drink Supply Strategy for Queensland Schools, which is all about offering healthy food and drink to students in the state’s schools, ensuring profit is not put before children’s health.

So, goodbye soft drinks, donuts and hot chips, and hello kombucha, chick peas and brisket burgers. This massive overhaul has been beneficial for students, but a difficult transition for schools. Many are struggling to survive as compliance demands increase and volunteer numbers decrease. The schools managing the transition well must invest a great deal of thought and planning into their canteen menus.

Sunshine Beach State High School made national headlines in July for being the first school in Australia to stock kombucha in its school canteen. A gut-friendly fermented drink, the school’s canteen manager Jodie Slater introduced a sugar-free brand of kombucha to the school, along with meals like sweet potato fritters with Moroccan couscous and homemade salsa.

The school sells almost 100 cans of kombucha a month and while other schools are struggling to remain profitable and keep within government guidelines, Sunshine Beach High is showing how it’s done.

But Ms Slater is a former restaurant owner who is studying nutrition and dietetics with a focus on healthy eating for children, and few schools have this expertise at hand. Gone are the days when school canteens could get by with willing parents handing out fast food, sandwiches and confectionery.

They’re having to become innovative in a bid to remain profitable, with many schools now introducing barista-made coffee for parents and high school students.

“Years ago, there were no overheads, not a lot of cooking, not a need for a lot of equipment to cook fresh food,” Mr Edwards says. “They’d buy processed food, snacks or sandwiches and use a lot of volunteers.”

Mr Edwards says over the past 20 years, school canteens have been gradually losing volunteers and need to employ staff.

“These days volunteers are very hard to get. Some of the better resourced private schools might have them, but other private schools outsource to catering companies. Public schools don’t get volunteers so they’re having to pay staff.

“Public schools can’t run their canteens at a loss, but it’s becoming very difficult There are some fabulous examples of school canteens making a profit, but they’re the exception, not the rule.

“The government has been very focused on these guidelines but haven’t equipped the schools. If you don’t have an oven and only have a pie warmer, it’s very hard to make fresh food.”

Consequently, schools have turned to outsourcing. However, without parents popping in to see their children and help out in the canteen, the homely old school canteen culture is being lost.

“In Sydney, 60 per cent of school canteens would now be outsourced to catering companies,” he says. “It’s a bit less in Victoria – about 30 per cent.

“Queensland and the Sunshine Coast haven’t really started outsourcing their canteens to catering firms, but it’s a trend I see continuing. When a catering firm is running it, it doesn’t involve the school community and there’s less ownership. On the other hand, principals are employed to educate the kids and these canteens are becoming harder to make viable.”

The ASCA produced a cookbook, Food for Thought, in May 2017. It’s designed for schools, with recipes for creating healthy food in bulk quantities, with a catering section to help increase profits. Liza Hammond, the ASCA area manager for the Sunshine Coast, was heavily involved in the production of the book.

“One of the major challenges I don’t think people are aware of is that the canteen is only open for two meals a day and the expectation is that it’s supposed to be really healthy,” says Ms Hammond.

“There’s that pressure to make a lot of the food themselves, but they don’t have the volunteers. They’re feeding large numbers at once. A cafe might serve 10 to 15 people at a time. At a school, they’re expected at 11 o’clock to feed 400 people. It’s a big task, to maintain variety and keep it cost effective.

“Some schools do a fabulous job and they work hard at it. If you ask most canteen managers, they would be working at least five or six hours a week over and above what they’re getting paid for. It’s a hard gig.”

The University of the Sunshine Coast’s Caroline Martin is a dietician who has worked in the public health domain for more than 20 years and gave advice to canteens in South Australia from the mid-1990s to 2003, before she moved to the Sunshine Coast. She says with many families having two parents working, the number of children taking a packed lunch to school each day has decreased, which adds more pressure to school canteens to up their game.

“Our children only used to use the canteen once a month or once a week,” she says. “Now we hear of children using the canteen every day. There’s an increased reliance on the school tuckshop and with the introduction of Smart Choices, it may lead them to rely on the tuckshop as the main source of food. If the school tuckshop is actually adhering to the Smart Choice guidelines, I don’t see a problem, but we still have a lot of work to do in monitoring schools and supporting schools to actually achieve those guidelines.

“It’s not easy – from a nutritionist’s point of view, it would take me a long time to go through the resources and understand how I would use them, look at a canteen menu and make changes. A lot of tuckshop managers don’t have that background or training.

“A lot of schools are making a big effort to implement Smart Choices but are finding it’s limiting their menu. High school students are not purchasing because they don’t see anything they might like.”

Ms Hammond says high school students won’t settle for eating food they don’t enjoy when they have a multitude of takeaway options at the fingertips – literally.

“High school kids are ordering Uber Eats,” she says. “At one school in Brisbane, the school had to stop them buying Domino’s. The parents would book it and the kids would wait at the gate for it to be delivered.”

“I’ve heard about Uber Eats being delivered to schools on the Sunshine Coast,” says Ms Martin. “I don’t necessarily think that’s a good thing – it presents security concerns. It’s obviously not going to be subject to any kind of Smart Choices implementation either. It’s not something that should be a long-term strategy.

“I think we have to be innovative. There is a need for schools to try things and get input from the school community.

“When I was in South Australia, we recommended that schools always consult the school community widely.

“Get the students involved in the menu development – that way, there’s ownership and any changes will be accepted.”

Making the connection
Survivors in focus