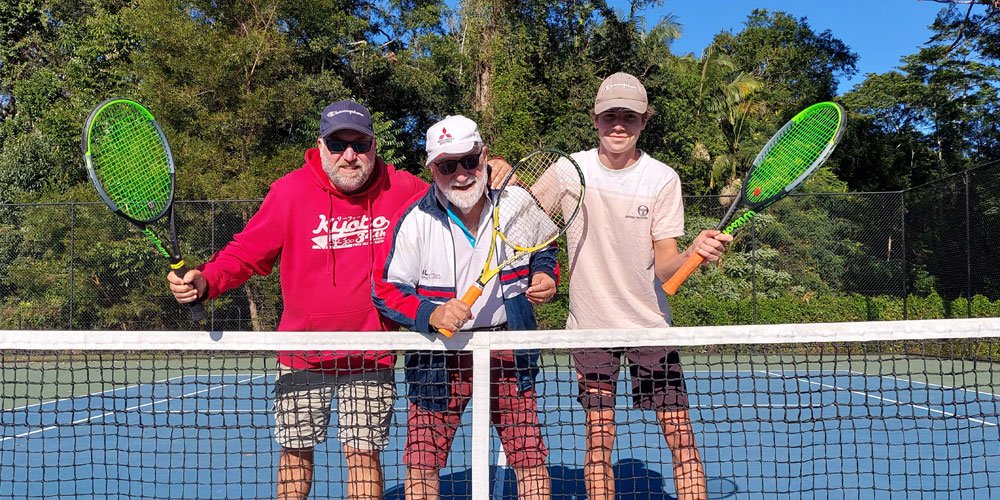 It’s sure to become a competitive game when three generations of one family show off their skills on the tennis court.

Lucky for the Schouteten family, it is a chance to ace their technique and continue a long-lasting legacy.

Andy, John and Ben are all part of the Landsborough Tennis Club where they often enjoy playing doubles.

John remembers growing up watching his dad Andy, now 82, and mother Mia play tennis at a local club in the Netherlands.

“At that time in the 1970s there wasn’t much to do for the kids, so my brother Guido and myself came along and also started playing tennis,” John says.

“At the weekends and school holidays my brother and I always played. The tennis courts were like our second home. There certainly was family rivalry between my brother and myself for many years. My brother eventually becoming the better player!”

The passion has not been lost on John’s sons Ben and Tom. Ben, 15, is making a name for himself on the local tennis scene, recently representing Sunshine Coast Grammar School at a tournament in Rockhampton.

“The team effort resulted in third place in the state and he also competed recently in the 2022 Elite Tennis International and won the men’s final to collect his first bit of prize money,” John says. “Ben’s long-term goal is to gain a scholarship in the USA with his tennis.”

While his sons are still actively competing, in their downtime the family enjoys a casual game at their local club.

“We often play doubles now; it’s all in good spirit,” John says. “It is also a nice family outing where the whole family catches up.

“Tennis is a great game. It brings people together and is for all ages and skills. It’s a game you can play a lifetime and, of course, there are numerous health benefits.”

To encourage more people to the sport, Landsborough Tennis Club will hold a family fun day on July 24 from 10am to 1pm. It will include a free clinic for juniors and seniors, plus a demonstration featuring rising tennis stars on Sunshine Coast and a mini doubles tournament.

Club president Dan Black says the club will also launch a Junior Aces program, which will be a first of its kind in Queensland. The 13-week program, in conjunction with Tennis Australia, will be offered at no cost to the Sunshine Coast community.

“In these extremely challenging times, the Junior Aces series allows parents who are burdened and overwhelmed with the increased cost of living the opportunity for their kids to participate in a professionally managed sports program with zero outlay,” Mr Black says. “We can even provide the use of equipment for those kids who don’t have any.”

He says the clinic will provide a holistic approach and include diet and behavioural sport psychology. “This is an extremely important concept with the challenges families, and in particular parents, deal with on a day-to-day basis.”

The clinic is available for children of all skill levels aged between six and 16 and runs from August 6 to October 29.

Four-legged heroes
A force for good