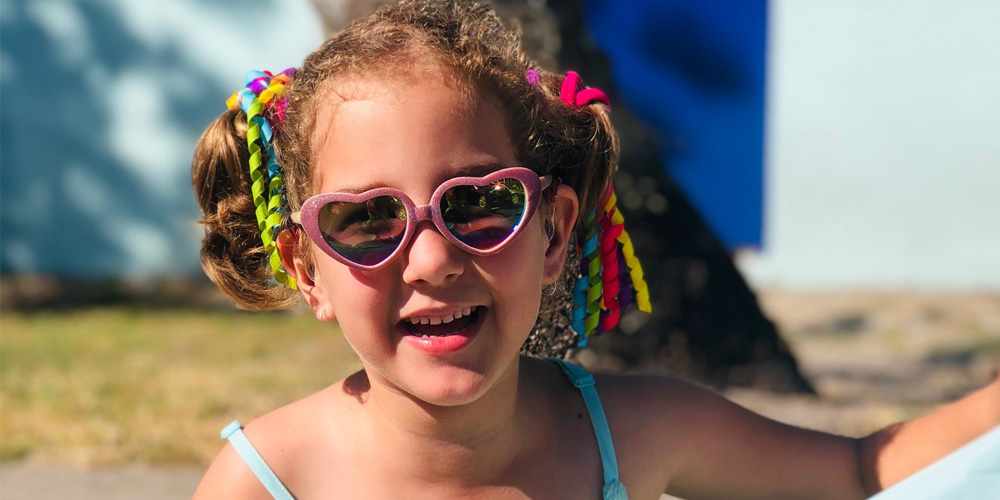 Ronnelle Hollier will never forget the day the youngest of her twins, Indi Breen, was given the gift of sound.

She was fitted with bilateral hearing aids, and recalling the moment they were switched on still brings tears to the Sippy Downs mother of three’s eyes.

“She was six month old, three months corrected [for being born prematurely]. I remember the moment clearly. She was in the pram and her hearing was getting worse. She had been diagnosed with light to moderate hearing loss at birth and now she was moderate to severe,” she says.

“When they put their hearing aids in, she popped up and turned her head around in awe. Her smile instantly grew bigger and she was a lot more alert.”

The family has come a long way with Hear and Say, which Ms Hollier says has been as equally challenging as it has been rewarding. But by trusting in the advice and education provided by the organisation, Indi has grown into a confident and capable young girl.

“There were times where we would be picking up her hearing aids and putting them back in 11 times in a day, on alert to make sure she didn’t chew them and, of course, always working on the activities given to us by Hear and Say. The fact that she now has no speech impediment and people wouldn’t know she is hearing impaired when talking to her has made it all worth it,” she says.

“Indi wears her hearing aids with pride. She has become a huge advocate for her hearing aids and through working with Hear and Say, she knows how to stand tall and be proud instead of feeling embarrassed.

“We talk openly about her hearing impairment and she wears her hair up and doesn’t try to hide it. We’ve found that in doing this, we reduce opportunities for others to whisper and stare. When we see someone in public having a look, we will go up to them and explain what the hearing aids are and why Indi needs them. I feel that education is so very important.”

Ms Hollier speaks with pride as she recalls how Indi stood up in front of her kindy classmates last year to tell them about her hearing aids and give them each a chance to have a listen through them. She did the same again with her prep class at Chevallum State School earlier this year and was able to show the kids the Roger microphone system, which links her teacher’s voice directly to her hearing aids, giving her freedom to move around the class and not be stuck having to be seated at the front in order to hear.

“She explains to them how little things annoy her, like she can’t hear rain on the roof unless it’s pouring down, she doesn’t hear the bathtub running and can’t hear whispers,” Ms Hollier says.

“With her being confident in being her own advocate, it gets any awkwardness out of the way and allows the children to ask any questions they might have.”

Ms Hollier says Indi’s life has been filled with many unexpected twists, but she is so proud of her and how she has embraced life with a hearing impairment.

“She’s come so far and we 100 per cent wouldn’t have been able to do it without Hear and Say’s support. Like any parent you don’t want anything to be wrong with your child and to be honest, it took me two-and-a-half years to accept that Indi has a hearing impairment, but I’m a huge believer of looking for the good in life and I have been able to find so much awareness and gratitude for everything that is available for my child to live a full life,” she says.

“We’ve had open and honest communication, empowering her with tools so she can also handle things. Hand on heart I wouldn’t be the parent I am today with the skills I have today without Hear and Say.

“[My partner] Kenny and I have been open to learning and we trusted they know what they were doing. There is so much to learn and process when you have a child with a disability that you know nothing about, and to see her where she is today shows how she has made us all better versions of ourselves.”

Indi and Kye were born at 26 weeks gestation in Townsville. The family had relocated there from Mt Isa in order to be closer to medical services and when the twins were born, they were transported to Cairns hospital to be in the special care unit.

It was there, on December 24, that Indi, now six, failed her newborn screening test. She also failed a second attempt.

Ms Hollier says they decided to connect with Hear and Say because she and Mr Breen didn’t want their daughter to rely heavily on sign language and not learn to communicate with people in everyday life.

“We wanted her to actually learn how to speak and listen rather than just signing,” Ms Hollier says. “They were really friendly and they met all of our needs and more.

“We started out with weekly face-to-face appointments in Cairns and we moved a year later back to Mt Isa for Kenny’s work and we stepped into telepractice, where Indi’s sessions were done over Skype sessions. Now that we are on the Sunshine Coast, we are back to face-to-face sessions again.”

This will be Indi’s last year with the organisation, with her graduation set for December.

In a nod to all of the support and education Hear and Say has given to the family, they will once again be active participants in the annual Loud Shirt Day on October 18.

Dad Kenny, older brother Brohdy and Indi’s twin brother Kye created their own tie-dyed shirts for their first Loud Shirt Day three years ago and have since taken the event to the twins’ former kindergarten.

This year, they will be taking Chevallum State School by storm, hoping to raise much-needed funds for Hear and Say by encouraging their classmates to get on board. 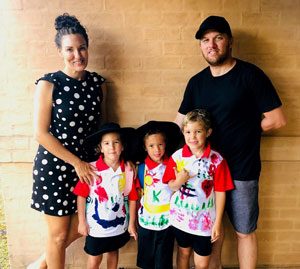 More than 12,000 Australian kids face every day with a hearing loss.

It takes up to six years to teach one profoundly deaf child to learn to listen and speak.

Hear and Say started in 1992 with six children and it now helps 900 each year.

32 babies and children received new implantable technology in Queensland in 2017/18.

3000 audiology sessions and 6000 listening and spoken language sessions are provided to Hear and Say children every year.

To find out how you can participate in Loud Shirt Day and help more Australian children to learn to hear and speak, visit loudshirtday.com.au.

Continue Reading
You may also like...
Related Topics: Hear and Say