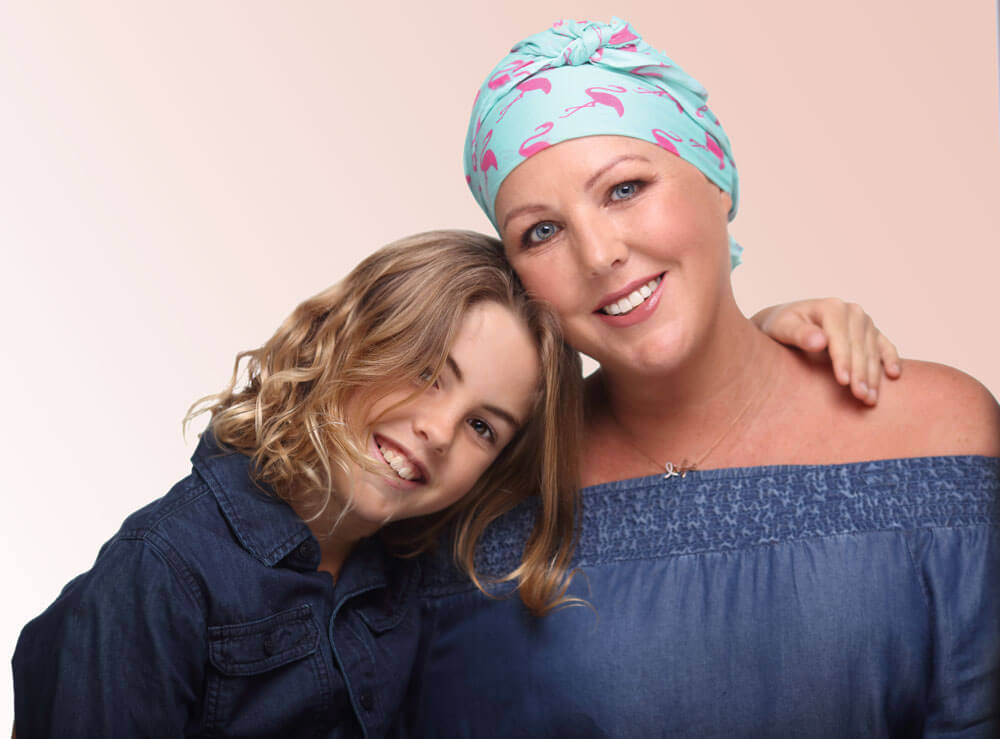 When Donna Penny was given the news her breast cancer was terminal, she didn’t ask, why me? She asked, why not me?

In 2013, the Warana mum to two children and three stepchildren was given the devastating news that her breast cancer, first diagnosed in 2008, had returned.

Her doctor gave her two years to live. Four years later she is defying the odds, fighting to stay alive for her children, particularly her youngest son Kai, who is 11 and has only ever known his mother with cancer.

“Kai is the reason I keep going,” Penny says.

“I have a son, Aiden, who is 22 and he buries his head in the sand about it. Because he’s older, he’s more aware of my morbidity.

“Kai’s so cute – he’ll see something on cancer on TV and say, ‘will that make you better mummy?’.

Kai was the inspiration for Penny’s book Why My Mummy?, which gained national media attention when she published it last year.

The Project’s Carrie Bickmore was so touched by Penny’s story, she flew to the Sunshine Coast to interview her.

“I’m no one special,” she says. “All these other women get it.

Penny first found a lump in her breast when she was 30, but it didn’t show up in a mammogram or an ultrasound and she was told it was nothing to worry about.

But the lump didn’t go away and in 2008, when she was 35 and Kai was just 20 months old, three small tumours showed up in an ultrasound – though a mammogram didn’t pick them up.

There was no lymph node involvement, but she had a double mastectomy to be on the safe side, underwent chemotherapy and took Tamoxifen, a drug used to treat and prevent cancer, for five years.

Today, Penny’s breast cancer has spread to multiple bones. She has a fractured rib from the cancer eating into it and many micro-fractures.

It’s also in her left adrenal gland and she has two lesions in her liver.

“My chemo options are running out,” Donna says, in her matter-of-fact way.

“I’ve been on full-time chemo pretty much for two years.”

According to the National Breast Cancer Foundation and Cancer Australia, the rate of breast cancer diagnoses in Australia is increasing.

Today, one in eight women and one in 715 men will be diagnosed with breast cancer by their 85th birthday.

Although more people are being diagnosed with breast cancer, the good news is more are surviving.

In the 1980s, the breast cancer five-year survival was around 72 per cent and today it has improved to 90 per cent, thanks largely to earlier detection and better treatments.

Sunshine Coast breast cancer surgeon Dr Lisa Creighton has operated on more than 1500 women during her 14 years practising on the Sunshine Coast.

She cites improvements in imaging, such as digital and 3D mammography, and the development of new drugs like Herceptin as some of the factors contributing to better outcomes for breast cancer patients.

Genetic testing for the BRCA1 and BRCA2 gene mutation has attracted much media attention after celebrities like Angelina Jolie publicised her own diagnosis and subsequent double mastectomy.

However, Creighton reports that the gene mutation accounts for only five to 10 per cent of all breast cancers.

“Not all women who opt for a bilateral mastectomy have an abnormal gene,” she says.

“That underscores the next frontier: understanding more about cancer genes and finding the next piece of the puzzle that predicts for breast cancer.”

As an oncoplastic breast surgeon, Creighton enjoys the relationships she has with her patients and finds her lifesaving work rewarding, although it has its sad moments.

“I can tell you the name of every patient who hasn’t won their battle,” she says.

“They come in all shapes, sizes, ages and backgrounds. They haven’t necessarily done anything wrong, haven’t smoked or drank, they’ve just drawn the short straw.”

Like Creighton, oncologist Dr John Reardon, who established the Sunshine Coast Haematology and Oncology Clinic in 1998, believes gene technology is the new frontier in the fight against the disease.

“I’ve no doubt in the future, part of a tumour will be sent off to the pathologist and part to the molecular biologist and they’ll tell us the array of abnormal genes that are driving the process.

“It’s certainly the way oncology is going. The days of blunderbuss chemotherapy are limited and of all of the new agents in clinical trials around the world, probably 95 per cent are targeted and not just general chemotherapy.”

As an army of medical practitioners, scientists, researchers and fundraisers work towards the goal of zero deaths from breast cancer by 2030, Donna Penny is living each day as it comes, supported by family and friends, including husband Jason, who she renewed her marriage vows with in June thanks to My Wedding Wish.

“I think the main thing for people with a terminal illness is to always have something to look forward to,” Penny says.

“We’re off to Japan in February so Kai and Jason can go snowboarding. Then a beautiful friend is taking me on a holiday to Aruba in April.

“I love flamingos, so we’re going to Flamingo Island. Fingers crossed my health holds up.”

She’s also off to the Mornington Peninsula on a retreat for women with terminal breast cancer later this month.

“We’re a group of 25 dying women and we plan to drink the champagne, eat the cake and have massages.

“I can’t talk for all women with stage four breast cancer, but I’ve been lucky to live a full life.

“I’ve had a great life; I met the love of my life, Jason. He proposed two weeks before I started chemo.

I’m not scared of dying – I’m scared of leaving my kids, especially Kai, because he’s still at an age where I don’t want him to forget me. I just need to get him a bit older.

“I’ve done two legacy videos. I just wanted to tell the kids, especially Kai, to work hard at school, travel, meet a girl, treat her well, save money, do the trips and always be kind.

“And I just wanted him to know how proud I was of him and if he settles down and has children, I’ll be watching over him.

“And I said I loved him more than anything and I’m sorry I won’t be around.”

Donna Penny is the guest speaker at the Pinktober Lunch in support of the Cindy Mackenzie Breast Cancer Program, October 11 at the Surf Club in Mooloolaba. Follow Donna on facebook.com/whymymummybook or instagram.com/fighting_to_live_xx

Most medical experts agree that successful treatment of breast cancer is linked to early detection. BreastScreen Australia invites women aged between 50 and 74 for a free mammogram every two years. Women aged 40 to 49 and over 75 can also be screened free of charge but don’t receive invitation letters. Ultrasound can detect breast changes that can be felt but not seen on a mammogram or changes in women with dense breast tissue. Research has found dense breasts can increase cancer risk by six times and make clear mammogram detection difficult. The Specialist Women’s Imaging Centre at Currimundi has Australia’s first Senographe Pristina 3D Mammography System, a $5-million machine that uses a dye to enhance the contrast in the image and aid accurate diagnosis, particularly for dense breasts. For women at high risk for breast cancer, an MRI may be recommended. Women are also advised to do a monthly breast self-exam.

For more on breast cancer awareness, read our Fighting to beat BRCA2 story.