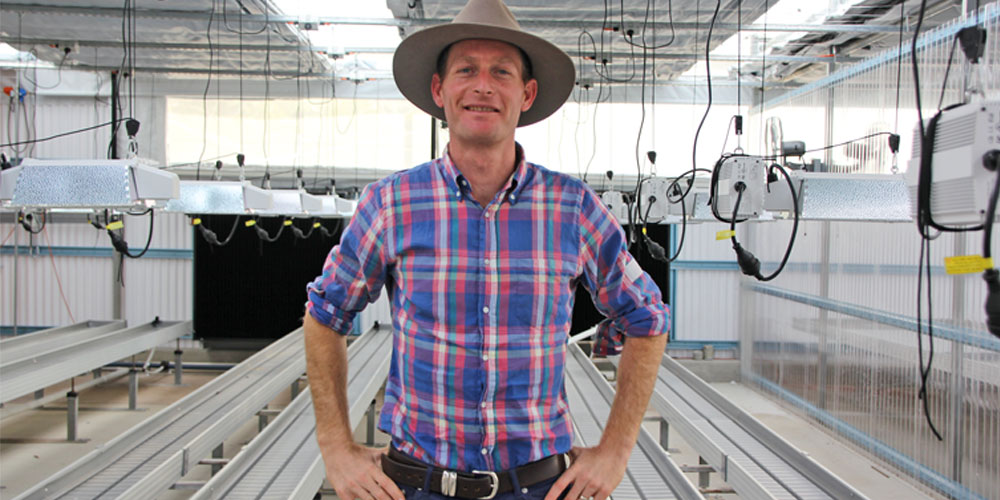 Even though the first plants are yet to be cultivated, support is already growing to make the Sunshine Coast the nationwide hub for medicinal cannabis.

The first Australian company to be licensed to cultivate and manufacture medical marijuana, Medifarm, is based at a secret Sunshine Coast location and director Adam Benjamin has created the first accredited medicinal cannabis education symposium for doctors.

It is the first symposium of its kind in Australia and is expected to draw medical professionals from around the country when it is held on July 6 at the University of the Sunshine Coast’s Innovation Centre.

Medifarm is undergoing due diligence and has already spoken with the State Government and USC about creating a medicinal cannabis centre of excellence at the Innovation Centre.

Medicinal cannabis, a Schedule 8 restricted substance, was legalised in Australia in 2017 and Mr Benjamin says the combination of ideal growing conditions, an existing health hub and Australia’s federal laws has made the Sunshine Coast the ideal location for this agri-med business to thrive.

“Medifarm should be planting our first crop sometime this month and our facility is ready for that crop,” he says.

“We have licences to cultivate and manufacture and will be producing and extracting from locally grown product based on the leading international protocols through our exclusive partnership with [medicinal cannabis company] Tikun Olam in Israel.

“We want to help Australian patients by providing greater education for doctors. GPs and specialists obviously do their best to help the patient and that is the forefront of any choice they make, but we appreciate this medicine is very new to the concept of legality and we are being asked to bring it to advanced medical minds, so you have to have that conversation from zero to 100 per cent very quickly.”

The symposium is for medical professionals only and will cover prescribing, protocols and applications of medicinal cannabis.

A Queensland Health spokesperson says to date, there have been 59 applications to prescribe medicinal cannabis in Queensland. Three applications have been received from doctors on the Sunshine Coast through the single-patient prescriber pathway. The spokesperson says a further 26 patients have accessed medicinal cannabis through the patient class prescriber pathway, however, none of these has been on the Sunshine Coast.

Dr John Teh is an approved medical cannabis prescriber based in Brisbane who will be one of the guest speakers at the symposium.

Dr Teh has been a cannabinoid clinician approved by Queensland Health and the Therapeutic Goods Administration (TGA) to prescribe imported medicinal cannabis from approved countries such as Canada since it became legalised here. He looks forward to being able to prescribe Australian-grown produce before the end of the year.

“It was more patient-driven for me,” he says. “I have spent years researching natural and nutritional treatments and I realised there was so much potential for this new medicine.”

The government has legalised medicinal cannabis for those suffering from epilepsy, spasticity from multiple sclerosis, cerebral palsy and traumatic brain injury, chemotherapy-induced nausea and vomiting, and for palliative care patients.

“It’s such a powerful therapeutic product with a high safety profile, which means the side effects are minimal compared to the beneficial effect,” Dr Teh says.

“I have already seen a lot of success in patient treatments with this medicine that once this anecdotal evidence is further confirmed by science, I feel that the law makers will be happy to move forward to incorporate other ailments that could be treated with medical cannabis.

“In respect to the laws, I think perhaps the government has been conservative and careful in regards to implementing them, but the access schemes in place are definitely getting more efficient via patient demand, and waiting times are definitely decreasing.

“I can see in the short to medium term access will get simpler and easier for patients to navigate.”

Dr Teh says the symposium is a critical step in further educating medical professionals in the country on how medicinal cannabis can complement existing treatment programs.

“There is still a lack of acceptance because even some doctors still think this is giving patients access to a ‘doobie’ or marijuana cigarette that they can smoke, but in reality we are prescribing a therapeutic oil in the form of oral drops that we know 100 per cent of the constituents accurately and the majority of these products will not give the patient a high,” he says.

“I think it’s purely a lack of knowledge that is holding doctors back from becoming approved prescribers and it’s a fair comment that doctors also need to be educated on how to use these medicines that haven’t had a lot of education directed at it until now. It is something we should be focusing on.”

Mr Benjamin says the international medicinal cannabis export market is worth $70 billion and is expected to explode to $200 billion in the next decade.

“The big game changer for medical cannabis in Australia is our laws. They have emerged as the most favourable laws to support this agri-med industry,” he says.

“What makes us competitive internationally is that we have federal approval, which gives us the right framework to get on with business. In America, you hear states like Colorado and California that are doing extremely well with a lot of money, but federally it’s still illegal.

“This gives us an amazing competitive advantage globally, not only is your home turf supporting you in the way of the law, but then the Australian Government says now we are going to allow an export industry.”

But while there will be increased competition, Mr Benjamin says other countries cannot compete with our legal framework and outstanding reputation in health and agriculture.

“We would even stand ahead of Canada, which is now starting to talk about recreational usage, because in Australia we are purely dealing with a medicine and that’s a really great point of distinction,” he says.

Already, farmers, producers and manufacturers have flooded Medifarm, hoping to be swept up in the industry.

But Mr Benjamin says tapping into the export market will be “phase two” of Medifarm’s plans, with the initial focus firmly on getting the products to Australian patients.

Through Tikun Olam, Medifarm has the genetic strains for six different plants that will produce products for the key categories of patients approved by the government to access medicinal cannabis, meaning they will be able to begin whole-plant extraction from their first crop.

“Some companies are starting at the beginning, whereas we have the genetics already. What the Israelis have brought to Australia through Medifarm is their brains and their strains and we can now focus on bringing leading information to doctors and to clinicians to review,” he says.

“Lots of companies are giving the sales pitch that focuses on ‘pharmacovigilance’ of their product, which is the standards to which you would expect the medicines to be produced. While this is fundamental, if we go to the next level, we find what is of real value to the doctor – it’s education.

“Thousands of patients who come to us have passed on their doctor’s details for us to send on information and the symposium will be a great way for these medical professionals to find out more about how this medicine typically works in with treatments doctors are already using.

Queensland Health and the Therapeutic Goods Administration (TGA) has approved the following categories of patients to apply for a medicinal cannabis prescription:

Here’s what you need to do to begin the application process:

The full process of legally accessing medicinal cannabis for patients can be found here: www.health.qld.gov.au/public-health/topics/medicinal-cannabis/clinicians/prescribing#consult

The future of medicinal cannabis on the Coast

Medifarm director Adam Benjamin is working to pioneer a medical cannabis centre for excellence here on the Coast.

Mr Benjamin says he wants the region to become the leading hub of expertise in medical cannabis production, knowledge, and business.

“We are working very keenly and very excitedly on this project because medicinal cannabis has some amazing opportunities for businesses outside of just cultivation and manufacture,” he says.

“Health is the number one economic driver at the moment on the Coast and you can’t buy a region where the best in agriculture meets the latest and greatest in health infrastructure. But you can operate extremely well in that environment.”

Mr Benjamin says a future centre of excellence on the Coast would focus on commercial opportunities, creating an entrepreneurial hub for the industry. He has already had initial talks with both the State Government and the University of the Sunshine Coast about the proposal, which would require seed funding of about $25 million over five years.

“This money will support the infancy and the establishment of this industry. Because we have favourable laws, favourable conditions and favourable infrastructure, now we must additionally support companies who want to support this hub,” he says.

Mr Benjamin says they will continue to work on establishing the right structures and corporate governance to give the tax payer “the biggest bang for its buck” if the funding is approved in the future.

USC Deputy Vice-Chancellor (Research and Innovation) Professor Roland De Marco says while there is no official partnership yet, there is tremendous scope for USC to deliver education, research and services to help grow and develop the company. “USC’s continued rapid growth and niche research specialisations in agriculture mean we could form a powerful alliance with Medifarm.”

If you are a medical professional and wish to attend the Medifarm Medical Cannabis Symposium on July 6 at the University of the Sunshine Coast Innovation Centre, email enquiries@medifarm.com.au.