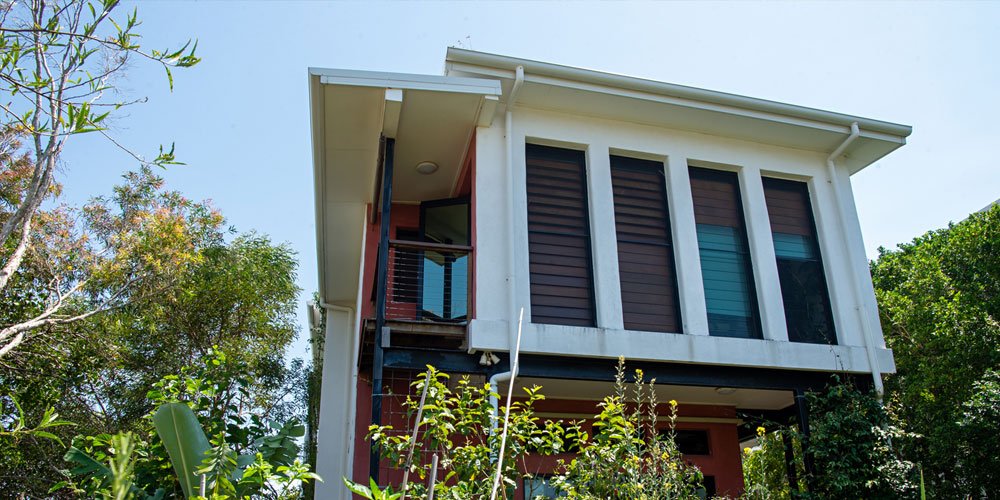 Marcus Finch has heard all the wisecracks about smoking his house.

The designer home in upmarket Moffat Beach is made of hemp in a simple technology that dates back to Roman times.

Marcus and wife Robyn built their dream home out of the tough fibrous plant to reduce their impact on the planet.

“There are have been a lot of jokes about smoking your house – I am so over it,” laughs Mr Finch, a former developer who now campaigns for the Greens.

“You would have to smoke the whole house to get any effect.”

The fast-growing hemp plant, a strain of the cannabis sativa, is enjoying a revival around the world as builders opt for sustainable, yet affordable, materials.

Hemp stalks are finely chopped and mixed with a lime binder and water to form hempcrete or hemp blocks that get stronger with time, with a lifespan of about 100 years.

The plant, which can grow from seed to harvest in four months, is touted as resistant to mould, pests and fire.

As a building material it breathes and has natural insulating properties that save homeowners money on cooling and heating.

And while the fire-proof material won’t go up in smoke, the entire house will one day decompose, leaving no trace on the block.

“At the end of its life you can break it all up and turn it back to the earth, like mulch,” says Mr Finch.

“Every building has its life and I expect in 100 years a new house will go here and we won’t be leaving more waste for the next generation.”

Their eco-home is in good company, with the most expensive house on the Sunshine Coast – a $24 million mansion at Sunshine Beach owned by hemp tycoon Evgeny Skigin – also made of the natural fibre

The Finches built their high-set hemp house five years ago after demolishing the asbestos beach shack that had been their home for 12 years.

Their home sits halfway up Moffat hill in the exclusive beachside suburb of luxury abodes, with stunning panoramic views of the ocean and Glass House Mountains from the upstairs deck.

While living entirely off 10kW solar power – with a power bill of just $1.50 this year – the Finches still enjoy the benefits of modern life such as fans, air-conditioning and appliances.

Unlike modern houses which leave a significant carbon footprint of some 25 tonnes, the hemp house is carbon negative, in fact absorbing carbon over its life.

Every detail of the house and garden has been carefully considered for its environmental impact. Timber from the old beach shack was repurposed for an internal staircase and kitchen benchtops.

Vegetables are grown in wicking beds to conserve water.

They collect rain in a 13,000-litre underground tank and have a rooftop garden on the garage for insulation and to reduce stormwater run-off.

Builder Johan Tijssen, director of Hemp Block Australia in Maleny, says hemp was a premium building material that is affordable and environmentally friendly.

The Hemp Block System he sells thought Australia, New Zealand and the US is taking off in Europe, where France is the largest hemp producer in the European Union and is gaining traction in the USA.

“It’s not a hippy story, it’s a proven, engineered and legitimate alternative building material,” he says.

“It’s a premium product – like going to a restaurant instead of Maccas – but without the premium price and with a healthier, better performance and longevity and worth for your money.”

Mr Tijssen says hemp technology has advanced since the Finches’ house was built with the hempcrete mixed on site. Today builders can use tongue-and-groove hemp blocks, which simplifies and speeds up the process.

“You don’t need mortar; you just stack them quickly. A bricky can do all the walls of a house in three days – you don’t have to wait for it to dry,” says Mr Tijssen.

“Then you render with a breathable lime render or even plasterboard and move in.”

Mr Finch says he was conscious of his Baby Boomer generation’s impact on the planet, and wants to make a positive difference for the next generations.

If it’s broken, fix it
Young blood gets business savvy